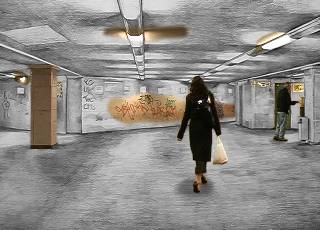 One might say that in Erla Haraldsdóttir’s work our everyday life becomes crazy. Using digital processing, collages and other means of media alienation, she makes the familiar appear so disconcerting that visitors begin to doubt the reliability of their own perception.
Attributes and images of completely opposing worlds merge with such seamlessness that the illusion can only be discerned at second glance, and in the end, the audience is left face to face with an alienated world.

In her work "Sad with Satie", which she presents as a video projection, Haraldsdóttir causes hand-filmed, apparently autobiographical video sequences to merge into animated drawings. The filmic narration permanently oscillates between drawn surfaces and the photographed outside world, until it finally becomes impossible to determine whether a photographically recordable reality is taking possession of the drawing, or whether the drawing is simply taking the place of this reality. Filmed "Post it" notes as the protocol of an unhappy love affair or intermittent, spoken comments which have the character of confession alternate with everyday fragments from an artist’s life, while Erik Satie’s grotesque, eccentric and simultaneously melancholy-barren music colours the action of the film.

"Sad with Satie is a funny, self-ironic and disturbing work of art, which fundamentally questions the desire to portray authentic emotional experiences."
(Lisi Raskin, essay on Sad with Satie)
www.bethanien.de