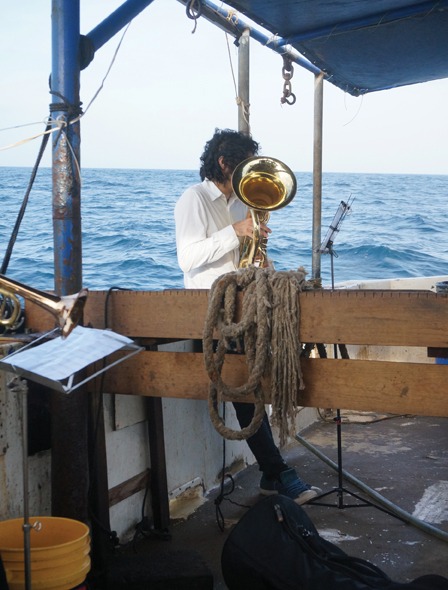 A missing island, a country that is crossed swimming from pool to pool, a motorbike ride into nowhere, strange whatsapps, palms and ants join together in Jiménez Landa’s installation, the individual works of which are interrelating in their meanings. Jiménez Landa’s works take the form of objects, minimalist gestures, erratic processes, or even situations that usually require collaboration with other people and professions and a plot involving the public.`

Among other things, the exhibition in Berlin shows a structure containing all the keys of an actually existing house in the distant city of Málaga, so that no one can enter it for the duration of the exhibition.

Jiménez Landa uses a sound recording by the writer Juan Rulfo (1917-1986), who reads his short story “No dogs bark” to send a whatsapp in the diction of the app, in which Rulfo’s text mutates into a completely different one, since terms are omitted that did not yet exist in 1986. The main project of the installation deals with the disappearance of an island in the Gulf of Mexico that has been mapped since 1536. The oil and gas deposits there prompted the governments of the neighboring states of the US and Mexico to discuss the course of their borders at sea: the existence of the island, which could no longer be found, played a decisive role here. Instead, a band plays a hymn in honour of the island exactly at the geographical coordinates where it is supposed to be. The action emphasizes the absurdity of the attempt to apply the logic of rigid land borders to the fluid medium of water – a space that is both visible and invisible.
www.bethanien.de
Edit Künstlerhaus Bethanien
11th Berlin Biennale
Berlin
Down to Earth
Gropius Bau
Berlin
In the Presence of Absence
Stedelijk Museum
Amsterdam
Die Spielstraße München 1972
Urbane Künste Ruhr
Marl
Ulla von Brandenburg
Palais de Tokyo
Paris
Geta Brătescu
Kunstmuseum St Gallen
St Gallen
Action: A provisional history of the 90s
MACBA
Barcelona
DIS presents: What Do People Do All Day?
Kunsthal Charlottenborg
Copenhagen
Frank Walter
MMK
Frankfurt
Summer of Suspense
Kunsthalle Zürich
Zürich
Daiga Grantina
New Museum
New York
Jeewi Lee
Kunstverein Hamburg
Hamburg
Lena Marie Emrich
Kunstverein Göttingen
Göttingen
Biennale of Sydney 2020
Sydney
Bergen Assembly 2019
Bergen
Steirischer Herbst 2019
Graz
Whitney Biennial 2019
New York
58. Biennale di Venezia
Venice
Urbane Künste Ruhr 2019
33. São Paulo Biennial
Sao Paulo
6. Athens Biennale
Athens
Manifesta 12 Palermo
Palermo
Riga Biennial 2018
Riga
Liverpool Biennial 2018
Liverpool
Steirischer Herbst 2018
Graz
10th Berlin Biennale 2018
Berlin
Made in L.A. 2018
Los Angeles
Biennale of Sydney 2018
Sydney
New Museum Triennial
New York
Odyssey
Möhnesee
Skulptur Projekte Münster
Münster