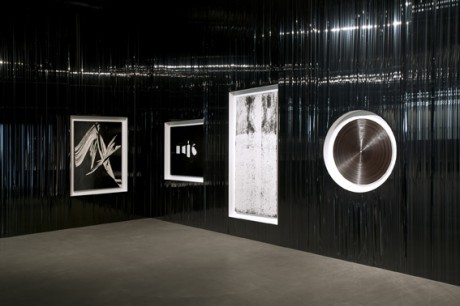 With this, the Falkenrot Prize has been awarded for the tenth time. It is presented to international artists whose work is considered likely to set new standards in contemporary painting and interrelated fields.

The Falkenrot Prize-winner 2016 is Berlin-based artist GREGOR HILDEBRANDT (*1974).The Falkenrot Prize is endowed by Künstlerhaus Bethanien Berlin and includes a major show of work by the prizewinner in the Künstlerhaus’ exhibition rooms, accompanied by a comprehensive catalogue. Previous prize-winners have been Seo (2005), Maik Wolf (2006), Sven Drühl (2007), Torben Giehler (2008), Tony Matelli (2011), Slawomir Elsner (2012), Maki Na Kamura (2013), Michaela Meise (2014) and Peter Krauskopf (2015).“In Gregor Hildebrandt, the award goes to an artist who ceaselessly explores fresh possibilities to connect the object-like or sculptural, the painterly, the filmic, and the photographic.

Based on the trinity of image, sound and scent, the artist’s ideas circle around various dialogic relationships: the material and the immaterial, the impenetrable and reflection, clarity and opacity, sound and silence, knowledge and ignorance, confirmation of existence and a turn away from existence.

In Almine Rech’s Brussels gallery in 2013, Hildebrandt dedicated an entire exhibition to the mirror theme, or rather that of Orpheus in the work of Jean Cocteau. References to pop songs often appear, via which Hildebrandt reproduces moods – with artistic precision and psychological sensitivity.” (Christoph Tannert)

The exhibition of works by Gregor Hildebrandt will take place in our gallery spaces from 15th April to 8th May 2016 (opening: 14th April 2016).
www.bethanien.de