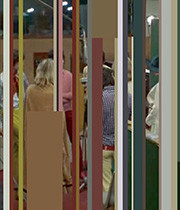 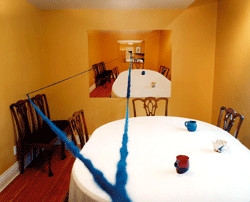 The Canadian artist duo Hadley+Maxwell focus their work on themes within the conflicting spheres of politics and aesthetics, subjectivity and political experience. Here, they employ a wide range of media including video, photography and music, but also posters and slogans. "1+1-1" refers to Jean-Luc Godard's film "Sympathy for the Devil", made in 1968, which also employed interfused, collage-like film sequences from Rolling Stones’ recording sessions in their London studio in order to highlight the zeitgeist and the social and political processes that led up to the revolts of 1968.
While Godard's key interest was in the processual and in creative interplay during the development of a work, the producer of the film acted independently and shifted the emphasis onto the "outcome" - the song that later became world famous. In "1+1-1", Hadley+Maxwell take up Godard's film again, transposing some of its aspects and elements into a new formal language that combines video, painting, drawings and music to create an extensive spatial installation.
Hadley+Maxwell's complex strategy aims to give back the unfinished, processual elements to the work and transfer Godard's original statement about the nature of the creative process to a modern artistic medium.
www.bethanien.de