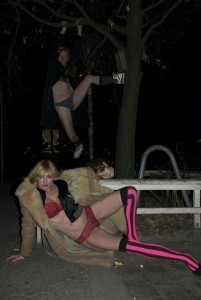 Kimberly Clark is a collective of Dutch artists whose videos, sculptures and installations often reveal a disturbing image of unbridled night-time pleasures that even cross the limits to excess. In static images or snapshots, the changing psychological states of modern man - ranging from euphoria to ennui and isolation to hysteria - are documented in a very direct way. Kimberly Clark's method is passionate and spontaneous, and mercilessly probes the wounds of post-modern man’s emotional poverty and failure to communicate. Their works frequently centre on a female figure, a symbol of the suffering yet always rebellious body that has to survive on the modern battlefield of our party society. The trio's rather gross and expressive language sometimes conjures the apocalyptic paintings of Hieronymus Bosch which show human beings cavorting on the edge of the world’s abyss. The centre-piece of the exhibition "Temporary Devotion" in Künstlerhaus Bethanien is Kimberly Clark's new video film made in Berlin, which is shown as a projection. It provides highlighted insights into Berlin city life and documents the reactions of passers-by and customers of bars and shops to the appearance of a ghostly female figure with no head, which, embodied by Kimberly Clark, also refers to actual historical facts, although these have long disappeared from the public consciousness. It is the unexpected, the open spaces in the already established, which interests Kimberly Clark - a practice through which the artists call for more space for intuition, improvisation and passion in both society and art.