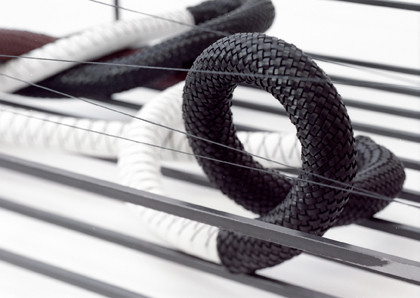 Lucas Foletto Celinski’s artistic practice deals with the representative quality and analysis of symbolism. This starting point developed from an interest in psychoanalysis and poetics. The subconscious of the psyche is enacted in working practice and materialises in the work itself.
For the exhibition Bedded-Down Knot in Künstlerhaus Bethanien, the concept of boundaries is extremely important. For every border, in particular those of the body, carries the possibility of contamination and change of values.. This leads to the development of a transitive space, separated from the materiality of the object only by the usual boundaries.
In the works currently on show this is visualised primarily by the heterogeneity of the materials. The contrast between soft textiles, leather, and hard steel and concrete lends an emotional value to the material. Ultimately, this framework becomes a breeding ground for a synthesis of formalism and romanticism.

Lucas Foletto Celinski lives and works in Berlin.
Most recently, his works could be seen in the context of the exhibition format KB outside in the group exhibition In Furs (curator Christoph Tannert).
www.bethanien.de