(Space is the Place) 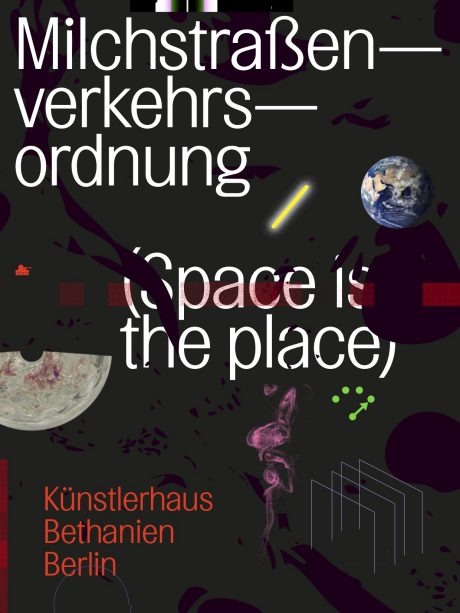 The future of mankind lies in outer space: that’s at least what the American physicist and bestselling author Michio Kaku believes; in his book Farewell to Earth he presents tempting ideas on how we can conquer the stars – an undertaking that certainly doesn’t happen without complications.

The exhibition therefore uses a dual title that, on the one hand, refers to Stanisław Lem’s term “Milky Way Traffic Code”, which refers to the impossibility of limiting damage when crossing cosmic borders, and yet does not leave us hoping for redemption in higher spheres, which Sun Ra raves about with his directional display “Space is the place”.

Guided by economic or political interests, the space industry is booming like never before. Almost every month we hear about new scientific achievements. There can be no more doubts – a new space age has dawned and, within the framework of a Commercial Crew programme, those adventurers who pay dearly for flying to the international space station ISS will be able to do so in 2019 already. And equally attractive for space visionaries are manned flights to distant planets such as Mars. The first unmanned and manned tests of the technologies are planned for the next decade.

In the arts, too, distant galaxies as symbols, projection surfaces and symbolic spaces have recently been booming again. Parallel to science, artists, musicians, science fiction authors, filmmakers and comic-strip artists are simultaneously using and criticizing space as a reflector of the human unconscious. This inscribes not only a scientific-critical but also a socio-critical dimension into the presentation of their works.

Music and sounds that explicitly deal with the theme of “Universe – Earth – Man” are an important field of experience for the exhibition. In the 1960s and 1970s, this triad was a huge topic in music, especially rock music, and is experiencing a renaissance with current forms of space and psychedelic rock. For more than 60 years Sun Ra and his fleet of 26 Arkestras have been giving a lunar Free Jazz orientation. They can be interpreted as instructions to multiply mind matter relationships beyond the limits of physics.

The exhibition presents works of painting, photography, drawings, objects, videos, record covers and sounds.
(Text from the catalogue of the exhibition)