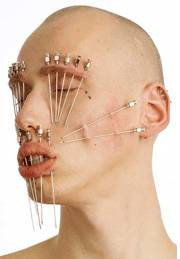 People attempt to subjugate their own bodies in many ways. Bodybuilders and tightrope artists are a testimony to this, and every big city marathon is a mass demonstration of collective self-discipline. But without doubt, the most radical way of making the body into its own object is to design the skin, decorating it with symbols and other marks. This does not mean today’s endemic Ibiza-tattoos or conventional earrings, but a desire to create a synthesis of the arts on ones own body. As from 4th August, the Künstlerhaus will be showing a survey of such practised self-stylisation of the body: by means of tattoos, cuts, piercings and a metamorphosis of the skin into material to carry cannulas and needles.

The exhibition SIGNS & SURFACES - curator Christoph Tannert - collects together photographs by Andreas Fux, Ali Kepenek and Herbert Hoffmann showing piercings and self-injury in their most radical form. In their pictures, bodies become the stage for painful dramatic productions, faces are turned into the background for a graphic arrangement of needles, and skin becomes a canvas displaying ornamental decorations.
The exhibition project thus represents a guide through the practice of body marking, but also outlines the development of individual biographical legends and links the technique of body manipulation to myth, spirituality and fantasy.