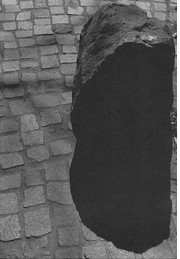 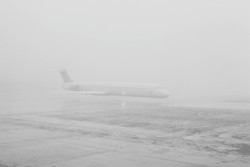 A viewer of Tom Sandberg's large-format black-and-white photographs usually sees common motifs. Familiar archetypes of everyday perception depict almost typologically straightforwardly. Instead of the brimming wealth of tiny details of many contemporary photographs, the croppings seem to concentrate on their objects as if on symbols of broader contexts.

Sandberg's motifs are various: grandiose, snow-covered mountain peaks and seascapes, a car parked on a street, a house spookily plunged into fog, a small child on the beach. Aerial photos are often used and move the earth away out of a state of suspension. In his seascape and cloudscape photos, the actual motif is barely recognizable, and the camera plumbs the very limits of what the eye is capable of grasping. This reinforces the aura of unreality, sometimes of uncanniness, that is inherent to many of his pictures.

Sandberg thereby becomes a documentary recorder of typologies of the human gaze. His details permit hardly any conclusions about their greater context. They indicate neither the specific site, nor the geographic surroundings of the picture. The photos of this much-traveled artist are thus "fragmentary documents of his being en route". (Mirjam Thomann, BE #14)
www.bethanien.de