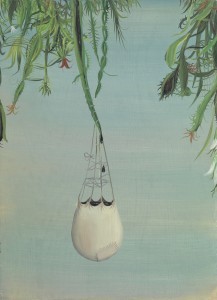 TOMASZ KOWALSKI’s paintings and installations fascinate the viewer with their highly imaginative details, from which the artist creates strange scenes and scurrilous stories. Kowalski’s pictorial worlds make extensive use of the iconographic repertoire of art history, combining echoes of Brueghel
and Bosch, still-life works by the Flemish masters, or naïve painting as recognisable citations to create new, apparently surreal landscapes and interiors. Tomasz Kowalski is not searching for something completely new; his focus of interest is the changing way in which we see past trends and art movements.
The muted, rather dark colours that Kowalski prefers to use, or the cobweb-like structures repeatedly found in his works, point to the deep and incomprehensible dimension of time, which is given precedence over space in his work as a painter. In the latest works, Kowalski groups together key themes and motifs from past paintings to create a new form resembling installation. He presents staged insights into objects’ inner life, into organic parallel-worlds comprising wooden, matt and interlocking colours, behind whose surfaces there is apparently little of a tangible nature.
The exhibition g n i a z d o in Studio 3 consists of a complex installation with one or two wax figures dressed in dark clothing in a kind of stage set with strange props – a black vinyl record, objects made from modelling clay and all manner of furniture. It seems as if one of the artist’s dreams has taken shape in a theatre scene including the stage set and actors. G n i a z d o – which means something like “nest” – expresses Kowalski’s interest in the 20th century Polish avant-garde: it is no coincidence,
t h e refore, that his ‘stage’ is reminiscent of Tadeusz Kantor’s absurd, unreal scenography. The gallery carlier | gebauer, Berlin is showing a comprehensive individual exhibition of work by the artist from 10th September to 10th October (opening: 9th September 2009).
TOMASZ KOWALSKI was born in Szczebrzeszyn, Poland in 1984. He lives and works in Krakow, where he has been studying painting under Prof. Leszek Misiak at the Art Academy since 2004.
In 2009, Tomasz Kowalski received the Eastern Europe Fine Art Fellowship from the Schering Foundation, Berlin, which includes twelve months residence and a presentation of work at Künstlerhaus Bethanien. The fellowship is being awarded for the sixth time by the Schering Foundation
(www.scheringstiftung.de).
Heike Catherina Mertens, President of the Cultural Section at the Schering Foundation, will speak at the exhibition opening on 17th September 2009 (from 7 pm); words of welcome by Malgorzata Lawrowska, Representative of the Embassy of the Republic of Poland in Berlin; introduction by Christoph Tannert, Director of Künstlerhaus Bethanien.
www.bethanien.de