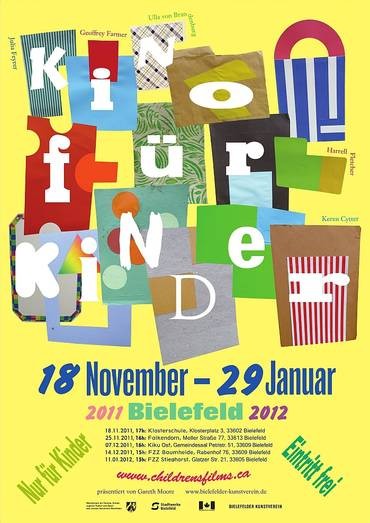 For his project »Children’s Films« Gareth Moore has asked five international artists to produce short films for children. The artists invited, Ulla von Brandenburg (*1974), Keren Cytter (*1977), Geoffrey Farmer (*1967), Julia Feyrer (*1982) and Harrell Fletcher (*1967) were free to focus on any particular topic, shaping the content and form of their respective film. Gareth Moore collated the five contributions into an episodic film and provided it with open and closing credits. In this way, an entertaining children’s film of more than 20 minutes came about. One point of reference for this project was, alongside his own fascination with the formats of popular children’s television, the »Children’s Tapes« (1974) of the American artist Terry Fox.

The particular quality of Moore’s concept does not, however, lie in the collaborations and in working with the film medium. The form of presentation and the fact that only children can come to the film are just as important. Grown-ups are only allowed to watch it, if an individual child needs accompaniment. The exhibition format Moore has developed for »Children’s Films« moves between children’s cinema, pedagogical film and travelling circus. That is because the film is not just being shown in the Kunstverein, but is going on tour throughout Bielefeld city. Weekly showings with a 16mm projector will take place in different locations in schools, centres for children and young people. The place and time are announced via posters in the exhibition space of the Bielefelder Kunstverein and in the Bielefeld municipality, as well as over the internet via the project’s own website. For that reason, only the announcements and the film posters designed by the artists are on display in the upper floor of the Bielefelder Kunstverein.

In this way, children are the “exclusive” target-group for Moore’s project. Regular visitors remain debarred from entering the actual body of the exhibition. With a certain charm, Moore thus subverts not just the usual form of presentation of an individual exhibition in an institution but also the communication itself. There are not many grown-up visitors, or art critics too, who will experience the episodic film by seeing it for themselves.