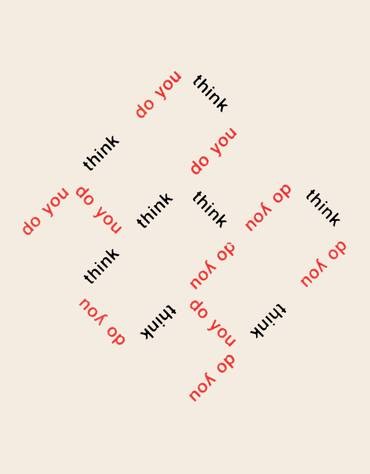 On the occasion of Eugen Gomringer’s 90th birthday, and set against the background of his life’s work, the Bielefelder Kunstverein presents an extended exhibition with the internationally renowned artist under the title of »Eugen Gomringer &«. Gomringer is reputed to be the »father of concrete poetry«. His first book, »konstellationen« [constellations] (1953), written in four languages, and his essay, »vom vers zur konstellation« [from line to constellation] form the movement's foundations. As a co-editor of »Spirale. Internationale Zeitschrift für Konkrete Kunst und Gestaltung« [Spiral. International Journal for Concrete Art and Design] (from 1953 onwards, with Dieter Roth and Marcel Wyss), Gomringer has been an international trailblazer in his field since the early 1950s.

If we consider both the current interest in poetry and language shown by contemporary art and the increased importance of the written work in short messages and digital communication networks, it does appear important to engage with the historic development of visual poetry and with Gomringer’s person.

With his work as its point of departure, the exhibition focuses, in collaboration with contemporary artists as well as poets, on the topicality of language and text in artistic creativity. It deals with concrete tendencies of the 20th century as well as with the digital impact on production and forms of contemporary poetry. In this process, words play a central role as visual-graphic and phonetic elements, together with their (im)materiality and mediality, as well as poetic constellations of linguistic elements. Alongside essential works and archival material by Eugen Gomringer, the exhibition presents numerous new productions by artists and poets, including texts, audio pieces, objects, paintings, photographs, videos, publications and installations. Our exhibition, »Eugen Gomringer &«, does not undertake any literary or art-historical categorisation, but locates Gomringer’s approach in his work and his conceptual pieces in a dialogue involving the present and also pointing to the future.
www.bielefelder-kunstverein.de