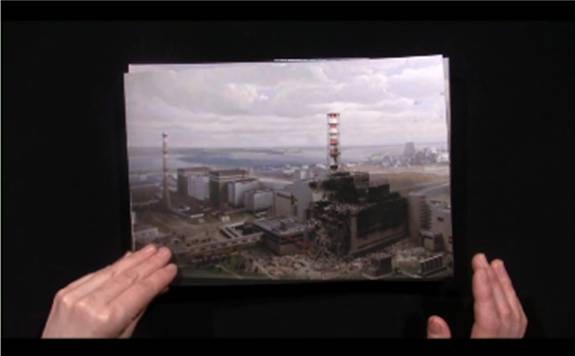 Lina Selander
»Anteroom of the Real«, 2010 - 2011
Video, colour, mute, 14 min.
Courtesy of Lina Selander
ANTEROOM OF THE REAL (2010 – 2011)
The central point of departure of the film, »Anteroom of the Real«, is the town of Prypjat , which was established in the 1970’s in connection with the Chernobyl nuclear power plant and was evacuated in 1986 because of the accident with the reactor there. Two hands leafing through a pile of photographs: empty streets, destroyed offices, a model of ‘Reactor 4’, dusty and torn documents and books, a television monitor on which a documentary on the Chernobyl catastrophe is running, etc. The film’s rhythm is prescribed by the leafing search. It generates a hesitant and jerky movement, which is less focussed on showing the pictures than on perceiving them. In an eerie way, some of the images certainly do recall the accident with the reactor in Fukushima in March 2011. They involuntarily develop a scenario on the basis of historical similarity, whilst others drop out of this pattern completely by dint of their enigmatic and not least, anachronistic character and block any comparison with more recent media images. However, linked on another level closely to the status of imagery from the mass media, we could also understand the film as an exercise in seeing: what is a (moving) picture? How is (filmic ) narration produced? Or, to apply a formulation from W. J. T. Mitchell: what does the picture want? It is, therefore, a matter of thinking by way of pictures, and in the final analysis, this aims at both interrogating the possibilities and limits of pictures and of narration.

Lina Selander (*1973 in Stockholm) works primarily with film, photography, text and sound, and in the process frequently merges these media. Their materiality plays here just as important a role and the sounding out of their supposed limits. One repeated theme in Selander’s work – which is also central in »Anteroom of the Real« – is the question as to how far history can be narrated.