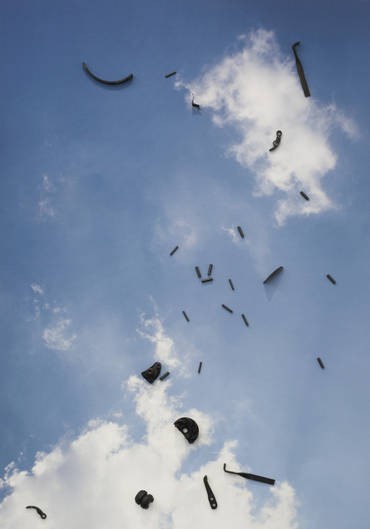 SHILPA GUPTA, UNNOTICED, 2016, DETAIL, COURTESY THE ARTIST
Shilpa Gupta is considered as one of India’s most significant contemporary artists whose work is presented internationally. She works in a range of different media, among them video, photography, sculpture, performance and sound. Gupta investigates how people and their experiences are formed by places and objects, but also by processes of classification, limitation, censorship and security measures. Via this complex approach, her work opens up an emotional access to her viewers and an intensive dialogue with them. For her first solo exhibition at a German institution, the artist is developing new works and offering an insight into her ongoing concern with the region between India and Bangladesh. Here, a crucial role is played by the socio-economic effects of the 4000-kilometre-long border fence between the two countries and its significance for the everyday life of the local population.

Shilpa Gupta, born in 1976 in Mumbai (IND), lives and works there as well. In the recent years solo exhibitions were shown, among others, in the context of the 56th Venice Biennial (2015, with Rashid Rana), at Kiran Nadar Museum of Art in New Dehli (IND), at the Kunstnernes Hus in Oslo (NO) (both 2014), at Galerie TaxiPalais in Innsbruck (AT, 2013) as well as at the Arnolfini in Bristol (UK, 2012). Furthermore she was represented by works in group exhibitions, among others, at the 12th Havana Biennial (CU), at the Göteborg International Biennial for Contemporary Art in Gothenburg (SE), at SALT in Istanbul (TR), at Queens Museum in New York (USA) as well as in the Iranian pavilion during the 56th Venice Biennial (IT) (all 2015).
www.bielefelder-kunstverein.de