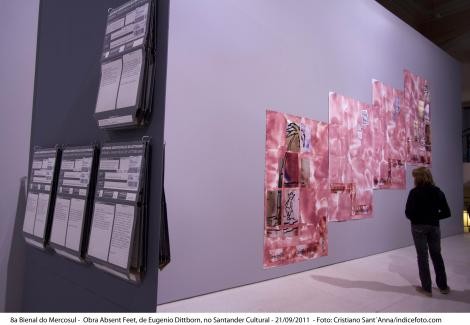 Entitled Essays on Geopoetics, the 8th edition was opened in September 10th to November 15th 2011 and is concerned with territoriality and its critical redefinition from an art standpoint. It showed 186 works of 105 artists from 31 countries that develop relevant works regarding the notions of country, nation, identity, territory, mapping, and boundaries through geographic, political and cultural aspects. More than 600 thousand people visited the exhibitions.

The curatorial project was composed by seven actions, addressed by exposing and activating strategies: Casa M, Travel Notebooks, Continents, Beyond Frontiers, Unseen City, Geopoetics, and a featured artist exhibition, Eugenio Dittborn.
The exhibition spaces housing the 8th Mercosul Biennial in Porto Alegre was the Quayside Warehouses, Santander Cultural, MARGS – The Rio Grande do Sul Museum of Art, and various other spaces in the state capital and other towns in Rio Grande do Sul.

Exhibitions and activities
Featured artist: Eugenio Dittborn – exhibition of the Airmail Paintings by the Chilean artist Eugenio Dittborn, a reputable name in Latin America. The works are showed in Porto Alegre, at Santander Cultural, and also in an itinerary exhibition in three Rio Grande do Sul cities: Caxias do Sul, Bagé, and Pelotas.
Travel Notebooks – expeditions to nine regions of Rio Grande do Sul between April and August. The results are showed in feature exhibitions in cultural spaces of different cities and during the Biennial in a collective show in Warehouse A7 on the Quayside.

Continents – seven international independent cultural institutions working on artist’s residency in three independent art spaces in Porto Alegre, Caxias do Sul, and Santa Maria. The main goal is to develop networks of exchange and collaboration.
Geopoetics – exhibition in Warehouses A4, A5, and A6 on the Quayside, in Porto Alegre, presented works and artists that question the notion of nationality. It showed many ways of representing and measuring the world. Micronations – small nations with or without territory – took part of this exhibition as zones of poetic autonomy – ZPAs.

Beyond Frontiers – a critical view of the Rio Grande do Sul landscape shown through new works by nine artists and also works from local museums collections. It had been shown in MARGS – Museu de Arte do Rio Grande do Sul, in Porto Alegre.
www.bienalmercosul.art.br