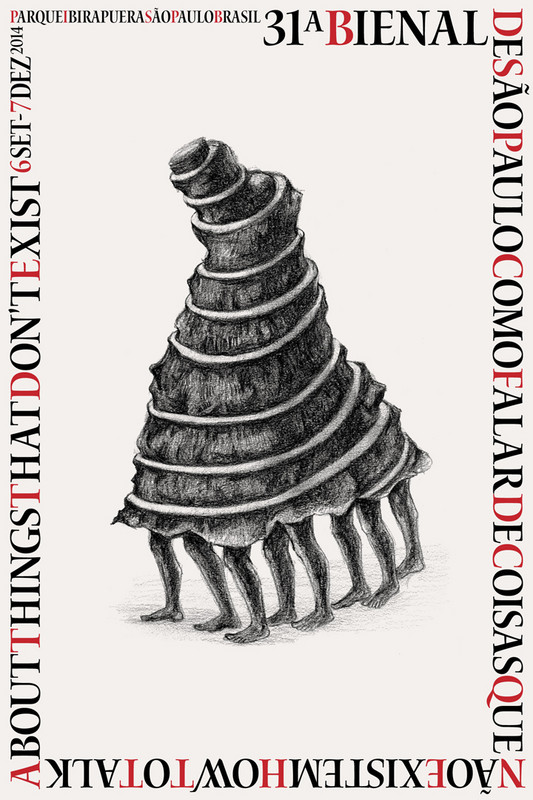 The 31st Bienal de São Paulo comes under the title How to (...) things that don’t exist, a poetic invocation of art’s capacities, of its ability to reflect and act upon on life, power and belief. The sentence, neither a question nor a proposition, entangles, through art, the mystical and spiritual side of life with political and social ideals – all this in a constantly changing world. It intends to communicate optimism about the possibilities of art today – an optimism that echoes that of the Bienal and the projects within it, grounded as they are in the belief in art’s ability to address and intervene in the places and communities where it appears.

The existence of things that don’t exist can be grasped if we recognise that human understanding and action are always partial, limited by expectations and beliefs. Some things, then, fall outside the commonly accepted frames of thinking and doing at any given time. When people find themselves in discord with existing explanations of life and their experience of it, the things that don’t exist become most tangible in their absence. They are often experienced as confrontations with limitations or injustices that we feel we cannot surpass, because we do not posses the means to do so.

However, in such situation, he range of possibilities for action and intervention is open – an openness that is the reason for the first of the two verbs in the title of the 31st Bienal to constantly change, anticipating the actions that might make present these things that don’t exist. We started by talking about them, later to move onto living with them. This was followed by using, but also struggling against and learning from those same things, in a list that can have no end.

The encounter between the political, social, religious, economic or ecological crises we are experiencing; the increasingly uneven distribution of power and resources; and the feeling that we lack the means to make real change real; seem to have arrived to a stage of turn. ‘Turn’ is a word sometimes used to refer to religious conversion, or to define a point where a certain construction of common sense gives way to a different set of shared values. In this moment of turning we are living, change is occurring without its exact mechanisms, direction and consequences being clear.

Turn – our turn – is not modern, oriented towards the future, progressive. It is, instead, disorderly, sometimes deceitful, definitely inconstant. It appears to be trying to find a way out of established parameters, in order to give space to complexity and flexibility – not shy of conflict and confrontation. This state of turn is our contemporary condition, and, therefore, the condition of this 31st Bienal.

The crisis of representation also extends to art, which has perhaps been in the past a primary form of representing the world, and many artists in this Bienal are concerned with being present in situations and allowing their impressions to accumulate slowly so that viewers of their final works can feel part of the process of discovery and learning. We wanted to look into ways of generating conflict, through projects that have at their core an unresolved relationship between groups; between different versions of history; or between incompatible ideas; but also to think and act collectively, in order to prove it is a much more effective and enriching way to work than the individual logic often proposed to us. In imagination, we see a tool to move beyond our current situations and to transform them. Art at its best is a disruptive force. It can create situations where the disallowed is recognised and valued through the act of imagining things otherwise. Lastly, transformation can be understood by artworks that can present the potential for change in many ways – taking advantage of transgression, translation, transsexuality and other transitional ideas that, like the turn, act against the imposition of a single, absolute truth. Indeed it seems that these ‘trans-’ words are ways to touch on things that cannot be fully expressed with written language, but instead rely on other forms of communication.

The 31st Bienal understands itself as eminently contemporary, in dialogue with our present times: with the situation today, in the city of São Paulo, where it is located; with Brazil, the country that is the city’s immediate context; South America beyond it; and the world at large. Both pre-modern and modern history appears within it, but the value of this history is not in itself, rather it appears as a set of relevant fictions, narratives and information out of which new possibilities may emerge for the future. The emphasis on contemporaneity also translates in a desire to do away with formal hierarchies between artists, curators, communities, students and publics. While a small group of people might be the initiators, the stress of the 31st Bienal is on all those who will get in contact with the project and make use of it, and on what the encounters with the projects and the event as a whole will create. The openness of the process needs to be understood in terms of a process of learning: an educational exchange that is established throughout and on each level and therefore unresolved and exploratory.

This is not a Bienal built on art and objects, but on people working with people on projects; on collaborations between individuals and groups; on relationships that should continue and develop throughout and, perhaps, even after the 31st Bienal is over. Hopefully, everyone who enters into contact with the Bienal will agree to accompany us for a journey, short or long, and explore these possibilities before branching off on their own individual and collective paths and take something new with them. Hopefully, this shared moment can be transformative for all involved. And for this to occur, the artworks, the words and ideas that emerge in discussions, events and situations that have taken place or will take place throughout the duration of the exhibition, all these need to be confronted, appropriated, used and misused by those who encounter them. Through all these encounters within and around this 31st Bienal, through what are fundamentally artistic acts of will, those things that don’t exist might be conjured into existence, and this way contribute to a different view of the world. Probably this is, after all, the fundamental capacity of art itself.

It's Just the Spin of Inner Life
by Agnieszka Piksa

Cities by the river
by Anna Boghiguian

House of Caboclo
by Arthur Scovino

Spear and other works
by Edward Krasinski

Balayer - A map of sweeping
by Imogen Stidworthy

The Abandoned Shabono
by Juan Downey

The uncounted: a triptych
by Mapa Teatro - Laboratorio de artistas

Space for abortion
by Mujeres Creando

Counting the Stars
by Nurit Sharett

Dark clouds of the future
by Prabhakar Pachpute

The Last Adventure
by Romy Pocztaruk

Those of Whom
by Sheela Gowda

Water-mirror of Granada
Fire in Castilla
by Val del Omar

Nothing is
The Fortress
by Yuri Firmeza
www.bienalsaopaulo.org.br