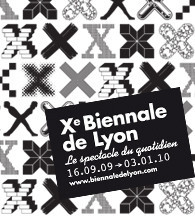 The Spectacle of the Everyday
We are living in the society of the spectacle. In spite of its alienating effects on our life and social relationships, it’s one of the very fundamental conditions of our existence. We perceive the world and communicate with each other through the spectacle – a system of image production and representation dominated by the logic of market capitalism which tends to "develop" our faculties of perception, imagination and reflection towards a "one dimensional model" formatted by the language of consumerist ideology. This is also the very contemporary condition of our self-identification and social order "guaranteed" by the established power system. As a main typology of artistic and cultural events of our time, biennials of contemporary art are no doubt an ultimate form of expressions of such a tendency.


The tenth. 20 years! A ripe age for a Biennial whose first edition opened exactly 7292 days ago. That edition, you may recall, was "The Love of Art": simultaneously a handsome title and a statement of intent. With a new chapter in history about to be written, this was a tribute to the works and the artists who, every day, build the very real world of our hopes, emotions and imaginations. This was a carefully weighed-up introduction to Contemporary Art, and the public – initially from Lyon and then from all over – felt at home right away with its brand of creative polyphony. Meanwhile the City of Lyon and associates, the Rhône-Alpes Region and the French State all gave the venture a great welcome – and ensured its longevity.

Now that the Biennial has reached maturity, the task is to consolidate its place in the international art world and reinforce the ties that bind it to its audience and its home ground. The Biennial was started with this in mind: ongoing artistic renewal and the long-term shaping of a stable project solidly rooted in its territory.
As a way of affirming this bond and demonstrating the fit between art and life – between the imaginary and the real – this tenth Biennial has opted for a look the everyday: our own everyday, the one we have to reinvent with each new dawn. Seemingly part of two irreconcilable registers, spectacle and the everyday have in fact been orchestrating our lives since the very beginning: the first commandeering the mise en scène, the lighting and the looking, and the second seemingly lost in anonymity, routine and work. "The Spectacle of the Everyday" brings the two together: a view of the world, its inevitable trade-offs, its harshness – but its generosity, hope and change as well.

This Biennial is an antidote to the mind-numbing reflex which, in this time of "crisis", would have us shut ourselves away, oblivious. Curator Hou Hanru has started out with the simple idea that in our society of spectacle, we need to reinvent the everyday, its "poetics", its manner of being – which is also ours – and its aesthetic.
While first and foremost an international exhibition, the Biennial, with its 70+ artists and 35 totally new happenings, is also over 150 events taking place under the Résonance banner, plus a one-of-a-kind creativity/awareness/dialogue programme designed by Veduta. In the spirit of the full-time forum in Sarkis's "hotspot" in the Museum of Contemporary Art, a vast ensemble of territories in the process of urban regeneration is featuring artists' residences, exhibitions, conferences, talks and entertainments, and bringing an incredible variety of contributors together: on local markets, in neighbourhoods, art libraries, theatres and a police station(!), at a watersports centre and on a beach. This means the chance to encounter art in all its diversity, including – for couples in search of closeness – a night spent at MACLyon, the Museum of Contemporary Art.