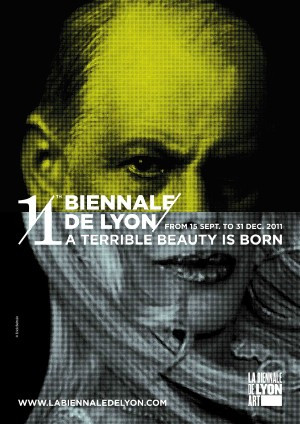 For the creation of the 11th Biennale de Lyon, historically a Biennale d’auteur, I have chosen to do as artists do: to grope, in the midst of a darkness that may or may not grow lighter as I advance, from point to point and from work to work, oriented by my obsessions, intuitions, and fears, and by the leads and provocations that each of the participating artists have thrown along my (that is, our) way. I have worked and traveled so that this show does it all at once: to address the uncertainty of the present and the near future, to speak about the condition of the artist and the necessity of art, while leaving the door open to doubt, to contradiction, to perplexity, to change and to movement. This is an exhibition that stems from the following sets of convictions and questions:

1
Imagination is the primary medium of knowledge. We share each of Oscar Wilde’s famous epigrams: "The function of the artist is to invent, not to chronicle"; "The supreme pleasure in literature is to realise the non-existent", and "what I am pleading for is Lying in art". This is to say, art requires a distance from the real in order to exist as such – as artificial construction – in order to address eloquently the complexity of the real.

2
Imagination allows for the rational and the irrational to coexist productively. Art’s artifice may be achieved through the conjunction and even contradiction of very diverse methodologies, be they rational (i.e. a return to modern notions of science and the encyclopedic) or irrational (i.e. recurring to mysticism, phantasmagoria, hallucination, delirium, the game, chance, and abandonment).

3
Imagination allows the individual to take risks, to expand limits, and to explore with or without intellectual rigor the gestures and practices that will allow him or her to present alternatives to the present; this is to say, to construct alternative systems of utopia.

4
Imagination is the primary force for emancipation.

6
In his poem Easter, 1916, the poet W.B. Yeats reflects upon his own present: He analyzes the uprising claiming Irish emancipation from the British with utter perplexity. At first sight, the poem could be read as celebrating the martyrs who gave their life for the cause of independence. Yet upon further scrutiny, it becomes clear that the attitude of the speaker is one of doubt. As Carlos Gamerro states in his essay for the 2011 Biennale catalogue, the poem shifts uneasily between affirmation, question and negation. It is this attitude by which we are unable to judge the evidence of a present that informs this Biennale. We prefer to respond, to guess, to contradict ourselves with liberty.

7
A Terrible Beauty Is Born, the famous verse from this poem which gives the title to this Biennale, brings together two apparent opposites. We are interested in this structure of productive contradiction.

8
Why is it necessary to – once more – reflect upon the notion of the beautiful? Beauty, in fact, has been one of the most forceful and arbitrary parameters of Western thought. We ask ourselves: Is Beauty –as R.M. Rilke would have it – always the beginning of terror? Is there a beauty that is not terrible? Does the emergence ofbeauty smooth over the harshness of reality, or does it actually highlight or increase its horrors?

9
The 2011 edition responds to these notions and mechanisms, by staging the tensions, voids, and excesses used by the participating artists to respond to the present. In this mise en scène, the Biennale borrows notions from philosophy, theater, and literature. Notions of staging, of performing acts, of unveiling, of masking, of disguising, infiltrate the Biennale as a whole and artist Erick Beltrán’s proposal for the graphic image in particular. This is an exhibition that allows for fiction to expand and to comment on the contradictions of the present.

10
This Biennale intends to address a state of confusion in the arts today, where art is conceived primarily as a commodity in the economic market. Here, we are interested in constructing an exhibition conceived as a web of discourses whereby the works speak to each other as individuals, creating meaning and establishing positions in the world.

11
Following Wilde, this exhibition does not chronicle; it distinguishes between art and journalism.

12
It also distinguishes between art and communication. This Biennale resists the current modes of communication whereby an exhibition is explained through a press release written in exactly the same tone and vocabulary from whichever corner of the world. We resist the notion of the need to explain dense materials. If texts are to appear in the Biennale or the catalogue, they will be artworks in themselves, not external explanatory texts.

13
Since Antiquity, words have been, above all, images, and images, words. Writing has been image-making. They both embodied one meaning and one action. The creation of an image implies opening the door to a consecutive action to take place in the real. It is this performative action that we are interested in exploring.

14
Every image has an effect. This exhibition has been structured reflecting upon these effects. We share the convictions of W.J.T. Mitchell when we choose to ask what the images and works in this exhibition want and do, what it is that they move and how, rather than what they represent. We intend to signal the power of the image, one that may drastically alter an established order. In this regard, we believe in the practice of image-making – however fictional, rarefied, or disguised it might appear - as, above all, a practice whereby the creator of the image enacts an ideological stance.

15
We are interested in reflecting upon the power of the line as a crucial tool to demarcate a territory, to delineate a position in time, space, and ideology.

16
This is how we respond to the growing confusion between art and politics. For us, the artist is above all a political subject and art is politics. We are not interested in the representation of the political, nor do we intend to enact the political. Such desires would be redundant.

17
The 11th Biennale de Lyon is being conceived from Buenos Aires, in South America, for and with Lyon. The artists in the exhibition have been invited during research travels in Europe and Africa during the past year, and they have been selected as individuals and not as representatives of their countries of origin or regions.

18
In many cases, artists were invited to respond to each other. That is to say, they have been invited to solve specific problems or to enter into a dialogue with other participating artists. This exhibition thus results from a grand series of conversations, a modus operandi that results from a belief in the power of dialogue for the construction of any given project.

19
The 11th Biennale de Lyon has the ambition to be alive. If it could be considered an animal or a beast, it would choose to be so. If it can be at war with itself, in order to speak of the inexplicability of the present and to the force of art, it will attempt to do so.

11th Biennale de Lyon will include around 60 artists from around the globe, but primarily from Europe, Africa and Latin America, across the 150.000 square feet of its four venues: La Sucrière, the Fondation Bullukian, the Musée d’Art Contemporain de Lyon, and the T.A.S.E. factory.

The Biennale’s catalogue is being conceived and directed by an editorial team based in Buenos Aires, that includes writers Carlos Gamerro and Rubén Mira, playwright and theatre director Alejandro Tantanian, and myself. Published and designed in close collaboration with editor Franck Gautherot from Les Presses du Réel, the catalogue is being conceived as an editorial, autonomous work – rather than as a representation of the Biennale per se.