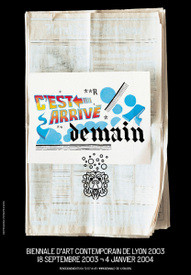 It Happened Tomorrow opened the time trilogy. This edition saw the Biennale put down fresh roots in several venues - including its first show at La Sucrière, a former sugar warehouse near the confluence of Lyon's rivers, which was refurbished for the occasion. The 7th edition hosted 75 artists and became autumnal again. It drew 130,000 visitors.