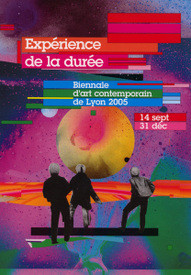 Experiencing Duration
Some 173,000 visitors explored the second volume of the time trilogy.
Sixty-three artists from 19 countries showed 290 works, including 21 Biennale premieres.
The Biennale was staged in five venues across the Lyon area: La Sucrière, the Museum of Contemporary Art, the Institute of Contemporary Art, Le Rectangle and Saint-Jean Fort.

Temporality has long been at the heart of the Western work of art. Its first appearance can be traced back to Assisi in the thirteenth century and the Saint Francis cycle: like the discoverer of a buried treasure, Giotto delved into the episodes of a legend, fixing their order and succession and thus giving visible form to the expectation underlying the history of Christianity until the 16th century: that time would end.

In 1529 Albrecht Altdorfer completed his “Battle of Alexander” for Wilhelm IV of Bavaria, based on the battle of Issus, a decisive global event. Measuring just over one square metre, the painting seethes with several thousand soldiers. In it Altdorfer created a particular form of temporality by introducing two anachronisms. On the troops' banners he wrote the exact toll of the dead and wounded, who in the painting are still alive; and in giving the Persians of 333BC an uncanny resemblance to the Turks who had unsucces-sfully laid siege to Vienna in 1529, he deliberately identified Maximilian II, due to become the next German Emperor and for whom the painting was somehow dedicated, with Alexander the Great.

So to what time frame do we assign this work, painted simultaneously in the present, future and past tenses? As we know, from here on in, awareness of time became an enduring standard in the history of perspective and of the work of art in general.

Later, when the painted impression burst onto the scene, and with the advent of the snapshot, the edited movie image and computer real time and its imitations, the spe-cific temporality of the work of art, and of the work within the work, grew paradoxically more and more equivocal as it became more significant and manifest.

Speed, acceleration, slowness, pause. What temporality does the work of art embody today? I wanted this question, deeply rooted in current creative work and deriving from a long tradition, to be the common thread of the 2005 Biennial.

I wanted the Biennial to be built on this basic hypothesis, gradually forgoing the awareness of time in favour of experiencing duration. The shift occurred when the initial topic (which associated a long time frame, simultaneity, loops and superpositions) was set beside the selecting of the exhibits. Some pieces hitherto deemed timely soon appeared essential – La Monte Young & Marian Zazeela, for instance, or in a very different register the James Turrell of “Dark Rooms” or Terry Riley. These works both constitute and produce their own hypnotic, introspective or super-posed – and relatively long – durations. They acquire reali-ty only through reference to the unique experience they summon and demand from the spectator. So in this Biennial the '70s generation seems poised to stage a revival of movements triggered quasi-fortuitously in the present, and will thus provide a grid – or rather a score to which, like a vessel, today's most contemporary work will tie up.

Then (or simultaneously), these durations need to be put into
order. This happens when they are installed, i.e. exhibited. Curiously, the exhibition – the switchover from time to space – was not so much conceived as composed, in the sense understood by Morton Feldman, whose involvement with the visual arts is well known. Indeed his “String Quartet No. 2” could be the exhibition's metaphor: think of his interest in duration, scale, experience, sound, but in the form of experiment rather than analysis of the medium; and in near-intuitive, bit-at-a-time assemblage based on
fluctuating recourse to a score.

Though temporality takes up much space in visual creative work, it is equally prominent in the social sphere and in the existential, mental and anthropological fields. Echoes are to be found, in France, in the work of such historians and philosophers as François Hartog and Paul Ricoeur..

This Biennial will thus be an opportunity to check on the efficiency of the work of art today, in the light of a more global project: that of our own temporality, of our behaviour with regard to the present, the instant, the moment; to duration, acceleration and the end.

Because “Experiencing Duration” embraces real time and simultaneity, I wanted the Lyon Biennial to reach out to other cities in Europe and garner feedback: from CAC (Vilnius), Migros (Zürich), PAC (Milan), the Palais de Tokyo (Paris), Portikus (Frankfurt) and the Tramway (Glasgow), art centres which mainly show work by France-based artists.

I asked Nicolas Bourriaud and Jérôme Sans to curate the 2005 Biennial because for more than three years now, at the Palais de Tokyo, this odd couple has embodied the serenely frantic image of a certain form of temporality, at once excessive and comforting.
www.biennale-de-lyon.org