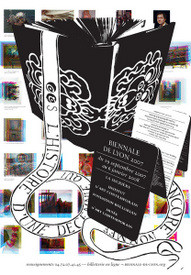 The OOs: The History of a Decade That Has Not Yet Been Named
The final opus to address the question of time.
There was a game with a rule: the devisers invited 50 curators from around the world to choose a work that represented the decade in progress. The 9th Biennale attracted 146,000 visitors.
Some 111 artists were shown in four venues: La Sucrière, the Museum of Contemporary Art, the Institute of Contemporary Art and the Bullukian Foundation.


LET’S TALK BIENNIALS
A few decades ago art historian George Kubler came up with the notion of the “Prime Object”: a form, picture or building whose factuality is acquired retrospectively, as the product of a long lineage.
Isn’t this one of the corniest commonplaces ever? Yes and no. Yes because, pace Francis Fukuyama, history still exists and its central role in the shaping of memory is in no way called into question. No because factuality for the historian is that which escapes oblivion. Factuality is what lasts: it’s the work that stays on the wall, or the benchmark image. From this point of view it’s an authority figure. But it’s also a way of asserting that the present only ever exists via the supposed future we endow it with. The work only exists after the event; otherwise it evaporates, disappears. This is why the historian only ever works in the future perfect tense. Not in the present moment. But this is not the case of the curator, whose job it is to get the current situation organised.
Distinguishing the present from the topical is the critical issue in the here and now. With the end of the traditional historicity rationales and the appearance of François Hartog’s “perpetual present” the distinction has become blurred and this is why the biennial system, the actualisation of the topical, has become such a success in thirty years. The here and now amounts to some 110 biennials, each of which draws up a map of an exponential, interchangeable, endlessly renewable topicality. Consequently flow prevails over singularity. 110 biennials, 110 lists of artists, 110 titles — a biennial every week, each overriding and cancelling out the one before. The biennial mechanism lives in and generates an infinitely extensible future.
Seen in this light, how can a biennial still be a critical institution or a flash of discernment in the languor of the flow?
Can we claim that art is now imitating the vacuity and rhythmicity of political and sporting events which, as we know, often describe themselves as “historic”, but which, as we know even better, only become events retrospectively?
Is the system now playing along with a kind of googleisation, with the place at the top of the screen tied to the number of clicks and, as a result, quality no more than an expression of quantity?
In brief, are we victims of our own search engines, which play up the information atavism and naturally stress immediate communication at the expense of the slow business of sedimentation?
Nonetheless, isn’t the work of art the established, archaic drag on the flows, just as the literary and the author might be elsewhere? If the answer to this question is yes, we must conclude that the time frame of the biennials is not that of the works and that there is even a deep antagonism between the two. This is what is at stake in the 2007 Biennial.


LET’S TALK HISTORY
In his story “The Library of Babel”, Borges offers a fine description of public euphoria when at last all the books are brought together. Then he shows the same public utterly at a loss, faced with an accumulation such that individual books have become unfindable.
Since its creation in 1991, the Lyon Biennial has always sought to be, first and foremost, an exposition: that is to say, to declare its allegiance to history. Since 2003 it has been treading the terrain of temporality, an all-purpose word as general as it is malleable – ductile – and was initially intended less to give an account of the current situation than to try to pin down its components. The results were “It Happened Tomorrow” in 2003, then “Experiencing Duration” in 2005.
In 1993 the second Lyon Biennial tried to name the century, borrowing its title “And Together They Changed the World” from Julian Beck. We were on the threshold of history, seven years before the 00s. And now, seven years after the 00s, the Biennial is out to name the decade. This is the same project – once again on the threshold of history – but with time’s arrow moving in the opposite direction. To claim that one is associating history with the present and the topical, when we have seen that the obvious gap between the two is very much an historical issue, is simultaneously
inevitable and a source of confusion.
The problem of topicality for biennials has a factuality about it which, as for the work of art, gives it a retrospective truth. As for the historical side, with Marc Bloch, Pierre Francastel and François Hartog we must associate, retrospectively Paul Ricoeur et Paul Veyne.
My intention was to round off the 2003/2007 trilogy with the question of temporality, by examining the historicist micro-processes which, to paraphrase T.S. Eliot, lead us through ongoing decline from Wisdom to Knowledge, then knowledge to Information, and ultimately from information to News.
What exactly is the news – today’s replacement for news items – that will make the present, which is to say, history? What “time frame/narrative” is to be constructed? How, so to speak, are we to visualise a form of archaeology of the topical?
Somewhere there has to be a history for the topical, and an archaeology for the topicality of the topical (the undifferentiated present).
This is why we must construct now a historical biennial, one looking retrospectively to the future with the intention of bridging the gap between the three conflicting binomes: the present and the topical, the birth of the work and the biennial system, and history and temporality. Because Stéphanie Moisdon and Hans Ulrich Obrist entered the series of filiations – what Kubler calls the “systematic age” – in the 1990s, the
former to “artify” them sequentially, as Alain Roger puts it, and the latter to give them shape as global flow, both seem to me to represent the dual critical authority capable of meeting this challenge.
This is what triggered our dialogue. They riposted with globality to globalisation, plot to history, futurism to the present, the gamble to the mechanics of selection and polyphony to topicality.
There are two kinds of players in this Biennial, artists and curators whose separate roles are founded on two sets of temporal rules which, while different, have the same abundantly clear purpose: to assert the central position of the artist. And there are two gaming tables to match the procedures of different exhibitions.
The scenario has been prepared by Stéphanie Moisdon and Hans Ulrich Obrist from the basic ideas I outlined to them, bearing on history, memory, topicality and oblivion, and their “presentification”.
Have we succeeded in being of our time? The future will decide.