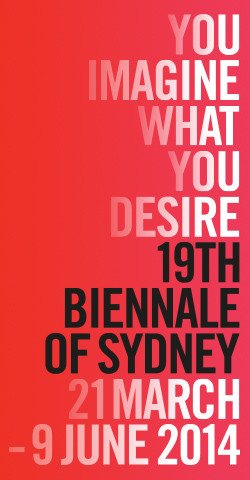 Sydney, Australia: The 19th Biennale of Sydney: You Imagine What You Desire, curated by Juliana Engberg and presented at inner-city and harbourside locations across Sydney, today
revealed the work of more than 90 artists from 31 countries.

Presented free to the public from 21 March until 9 June 2014, the Biennale of Sydney is Australia’s largest and most respected contemporary visual arts event. The exhibition is presented across five venues: Art Gallery of New South Wales, Museum of Contemporary Art Australia, Carriageworks, Artspace, and World–Heritage listed former shipyard and prison, Cockatoo Island.

You Imagine What You Desire celebrates the power of the imagination, with more than 200 artworks ranging from site-specific installations to sensory, multi-media projects, providing invigorating and mind-altering experiences for visitors of all ages.

19th Biennale Artistic Director Juliana Engberg commented: ‘You Imagine What You Desire is an energy filled biennale that presents a grand multiplicity of things. It is an exploration of the world and contemporary aesthetic experience through inventions, desires and propositions.

‘You Imagine What You Desire demonstrates the ways in which artists are active philosophers who seek to engage the audience and viewer in an exploration of our world through metaphor, narrative and poetry. They do this so that we might find inspiration in the sensations and intensities produced by art, and so that we might, temporarily, step aside from our commonplace experiences and feel something uncanny and unusual. Artists bring awareness to our world in transformation. They seek the possibilities of better worlds.’

Cockatoo Island is billed as a ‘fantasy location’, showing a number of adventurous new commissions and artworks for the first time in Australia. Inside the resonant Turbine Shop, Danish artist Eva Koch presents I AM THE RIVER (2012), an all-encompassing projection of Gljufrabui, the Icelandic waterfall, accompanied by a roaring soundtrack.

Danish artist duo Randi & Katrine have transformed a space in the Industrial Precinct on Cockatoo Island into an anthropomorphised wonderland, in the style of a typical Danish village. Surrounded by a city wall and with constructions designed to have human features – rooftops as hair, windows as eyes, and doors for mouths – The Village (2014) promises to be a magical environment for visitors of all ages.

Callum Morton uses the Dog-Leg Tunnel on Cockatoo Island as a readymade site for The Other Side (2014) – an experiential, ghost train–inspired journey into the mysterious and spooky. Visitors travel through the tunnel on a purpose-built train and experience a range of surprises devised by the artist. Using light, sound, wind and smoke to create a type of black hole or deep universe, this new creation is both magical and frightening.

The Museum of Contemporary Art Australia (MCA) presents works across two floors, including a major site-specific immersive video installation by renowned Swiss artist Pipilotti Rist in the double-height gallery space. Mercy Garden Retour Skin (2014) invites viewers to relax on human-shaped pillows made from stuffed items of clothing, and descend into a sensual pleasure world of vivid colour and light.

Glaswegian artist Jim Lambie has psychedelically transformed a large gallery space on Level 1 of the MCA with a pulsating Zobop work, using wildly coloured vinyl tape. The floor installation will be accompanied by a number of sculptural works, including Psychedelic Soul Stick 68 (2007) and Vortex (This Perfect Day) (2013), a circular sculpture that appears to be recessed into the wall of the gallery.

Also at the MCA, acclaimed artist Douglas Gordon presents his large-scale installation and video work Phantom (2007), seen for the first time in Australia. Gordon will deliver the 19th Biennale Keynote Address at the City Recital Hall on Friday, 21 March.
The newly expanded Carriageworks will present works that investigate the language, materials and narratives of the theatre and film worlds. Audiences encounter large-scale works by Austrian artist Mathias Poledna, Netherlands duo Broersen & Lukács and Dutch artist Gabriel Lester, whose work Where Spirits Dwell (2014) features a life-sized log cabin complete with curtains and front verandah. Examining elements of popular culture and the appropriation of golden-era American, Poledna will present A Village by the Sea (2011). Shot in black and white on 35mm film, the production replicates the style of a 1930s American musical.

Carriageworks and the Biennale of Sydney will also co-present the world premiere of a new work by celebrated British artist Tacita Dean. Event for a Stage (2014) is a one-act theatrical presentation that is both witnessed by a live audience, and later adapted and transmitted as a work for radio.
Event for a Stage will be presented across four nights at Carriageworks from 1–4 May.

The Art Gallery of New South Wales has transformed part of the Gallery into a forest, housing the work of Chinese-born, Germany-based performance artist Yingmei Duan. As part of Happy Yingmei (2014) visitors are invited to travel through the forest to meet and interact with Duan, who will inhabit the installation dispensing prophecies and poetic observations throughout the 12-week exhibition period. Australian (Bidjara) artist Michael Cook presents a new photographic series, Majority Rule (2014), which asks us to ponder the impact and effects still suffered by Australian Indigenous people, and what it may have been like had there been a friendlier, more humble and understanding approach from the invaders who colonised this country.

Artspace returns as a venue partner for the 19th Biennale, presenting works that trigger strange encounters with time and ideological travel. Swiss-born, New York–based artist Ugo Rondinone reveals primitive (2011–12), scattering the floor of the exhibition space with 59 birds cast in bronze, all of different shapes, textures and personalities, and drawing the viewer’s attention back to the world outside.

A 12-week education and public program is presented as part of the 19th Biennale, with highlights during the opening weeks, Middle Program and End Program. Further details can be found at 19bos.com.
www.biennaleofsydney.art