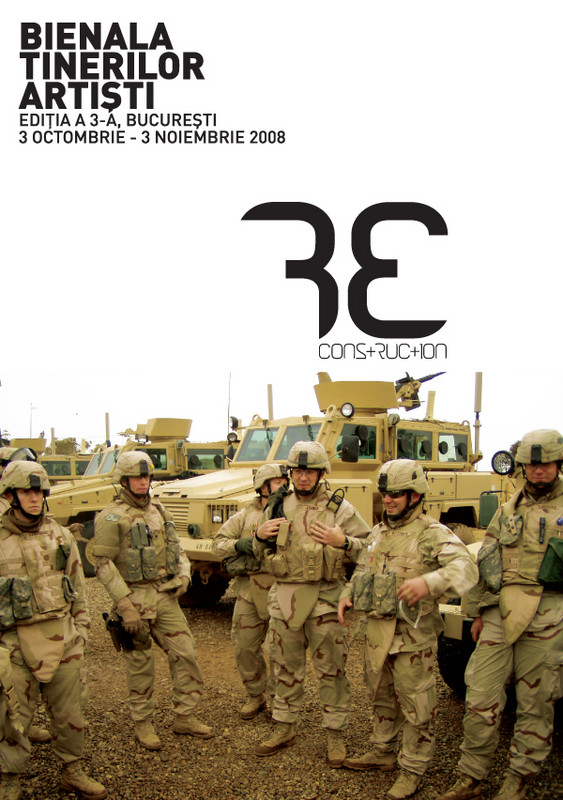 The third edition of the Biennial of Young Artists aims first and foremost to be an overview of the international contemporary art while closely associating the Romanian scene to the international scene. It presents itself as an instant photograph of contemporary creation so as to update the contemporary processes of art and help the general public understand the latest artistic and cultural developments better. Think Global and act Local could be one of the first statements and despite being inspired by the previous years’ motto of the Biennial, “Art is Always Somewhere Else”, I wish to give to this year’s edition the title “Re-Construction”.

I noticed during my permanent contacts with the Romanian artists, critics and curators as well as from other countries of the former Eastern bloc that one of the questions obsessing them is this spread and ambiguous feeling of normalisation. The question is not solely put by people from here but also by all the others. What makes them similar and what makes them different? When the imposed ideological differences have grown blurred, what does it mean to be like everyone else on the artistic level? And this one quickly reaches a paradox because the artist is first of all a personality of exception and not somebody similar to the others.

Being normal on the artistic level has to be considered in historical and dialectical terms. History wanted that for all the post-war periods until after the wall. Two cultures and two ideologies were confronted and immediately the main obsession was to fill the gap. Somehow the exception in the bad sense was on the other side of the iron curtain.

In this sense, what does it mean for an artist to be upgraded when its explicit and implicit goal is to be himself and obviously different from the others. How does one preserve and cultivate an identity in this symptomatic moment where globalisation is present all over the planet? What occurred in the West and did not take place in the East? And as a consequence, what type of attitude and way of making art is necessary to update oneself and to fill in the gap?

The historians of contemporary art agree today and consider that especially in the sixties and seventies we witnessed what is called the process of deconstruction. I will not develop this rather philosophical concept, denoting a process by which the texts and languages of Western philosophy (in particular) appear to shift and complicate in meaning when read in the light of the assumptions and absences they reveal within themselves. But what is clear today is that in terms of vocabulary and in terms of the formal and conceptual level, the art of today is largely dependent on the deconstruction process.

The idea of the exhibition is: how can the artist proceed to a reconstruction work and at the same time deal with the deconstruction heritage?

In this particular moment of the present times’ history, when individualism is structured more strongly than ever, the artists are still using consequently an universal language strongly inspired by the radical tradition but in order to build individual stories.

I intend to do a research in-depth about the situation of the contemporary art in this area, namely in Moldova, Ukraine, Bulgaria and Serbia.

We are going to invite about 40 international artists, and around 10 to 12 Romanian artists. The aim is to choose artists who ( for the big majority ) have never been present in the Young Artists’ Biennial before.

During the opening days, a catalogue will be published, a web page will be developed and a panel discussion will take place as well.