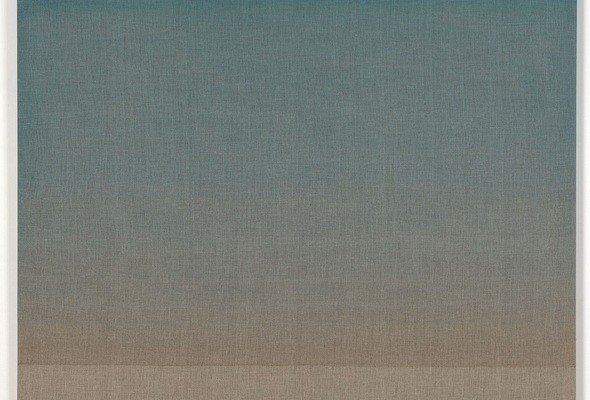 Blain|Southern presents new paintings by French artist Agathe de Bailliencourt in her first UK solo exhibition. The exhibition mounts works from the artist’s Couleurs du temps series, the genesis of which is rooted in a three month residency in Marfa, Texas in 2014. Marfa’s extraordinary landscape and desert environment had a profound impact on Bailliencourt’s notion of time, space and horizon. The new paintings produced in Berlin continue her reflections on these concepts, with the artist questioning ‘what does it mean to paint a landscape today?’

The paintings are characterised by their subtle colour gradations. Swathes of blue pigment develop from watery washes into saturated bands of vibrant azure, tinged in places with pale, luminous pink. Each canvas is prepared by dousing the raw linen surface with large amounts of water, after which Bailliencourt adds layer upon layer of diluted colour. The untreated fibres react to the paint in unpredictable ways, each stroke drying at its own pace, forcing the artist to step back to let the colour of each striation develop before deciding upon another layer. Between control and capriciousness, through the thorough process of repetitive layering, time is recorded into a landscape that emerges both slowly and suddenly.
www.blainsouthern.com