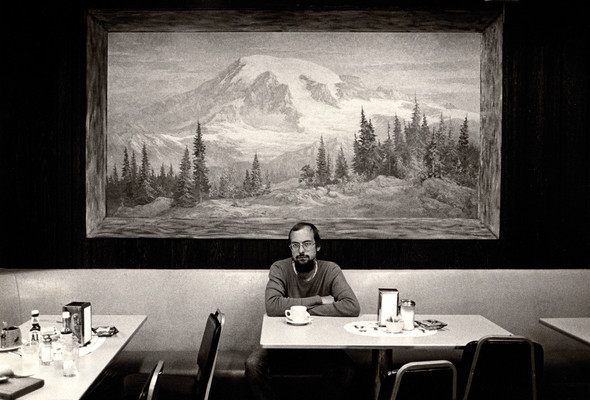 Opening this week, Blain|Southern presents significant rarely-exhibited works from Bill Viola's early career. The exhibition illustrates Viola’s boundless experimentation with the newest media of the time, which paved the way for subsequent generations of artists working with video, sound and computer technology.

The exhibition focusses on one monumental installation Moving Stillness (Mt. Rainier), 1979, shown for the first time since its inauguration at Media Study/Buffalo, New York. With a large body of water, environmental sound recordings and projections, Viola’s multi-faceted yet serene creation was pioneering in its mixed use of media.

Moving Stillness (Mt. Rainier) is a landmark in Viola’s meditations on the fragility of nature and our perception of its changes over time. A screen is suspended from the ceiling above a large shallow pool of water. A projector with three separate beams (one each for red, green and blue light) sends an edit of real-time footage of Mount Rainier to the surface of the water, which then bounces up to reach the rear projection screen. At periodic intervals, the water’s surface is disturbed causing the three beams of colour to separate, until finally becoming an unrecognisable pattern of form and colour. Slowly the water settles, to once more form a coherent image after the surface vibrations subside.

The solid, unmoving, reflected image of a mountain proves to be delicate and impermanent as it disintegrates at slight disturbances on the surface of the water. Presented in the gallery as a stand-alone work, this meditative installation offers a rare moment for mindful focus.

In conjunction and presented for the first time ever, recordings of Bill Viola’s early sound compositions form an immersive installation The Talking Drum at The Vinyl Factory Space at Brewer Street Car Park in Soho, London. Two works are featured, The Talking Drum, 1979, and Hornpipes, 1979–82, that explore the resonances of an empty swimming pool.

Restored by Bill Viola Studio, recordings of these performances are presented together for the first time as a limited vinyl edition of 100, pressed by The Vinyl Factory. The hand numbered edition features two full compositions, The Talking Drum and Hornpipes and an excerpt from a series of experimentation entitled Pulses (Duomo Bells). Reproductions of the original program notes and invitation from a 1979 Composers Inside Electronics performance in Buffalo, NY are also enclosed.

The exhibitions are the latest in one of Bill Viola’s most extensive periods of activity across the UK, which includes the concurrent opening of Bill Viola at Yorkshire Sculpture Park, the release by Thames & Hudson of his most comprehensive monograph and the latest leg of the Tate and National Galleries of Scotland touring programme, ARTIST ROOMS, at The Wilson, Cheltenham, Gloucestershire. This follows notable presentations at Auckland Castle and The Line, and the permanent installation of The Martyrs (Earth, Air, Fire, Water), 2014, at St Paul’s Cathedral, London.

Yorkshire Sculpture Park’s presentation is the artist’s most extensive exhibition in the UK for over 10 years. The immersive exhibition in the Chapel and Underground Gallery features installations from the last 20 years of Viola’s career and premieres a new work, The Trial. The exhibition runs until 16th April 2016.
www.blainsouthern.com