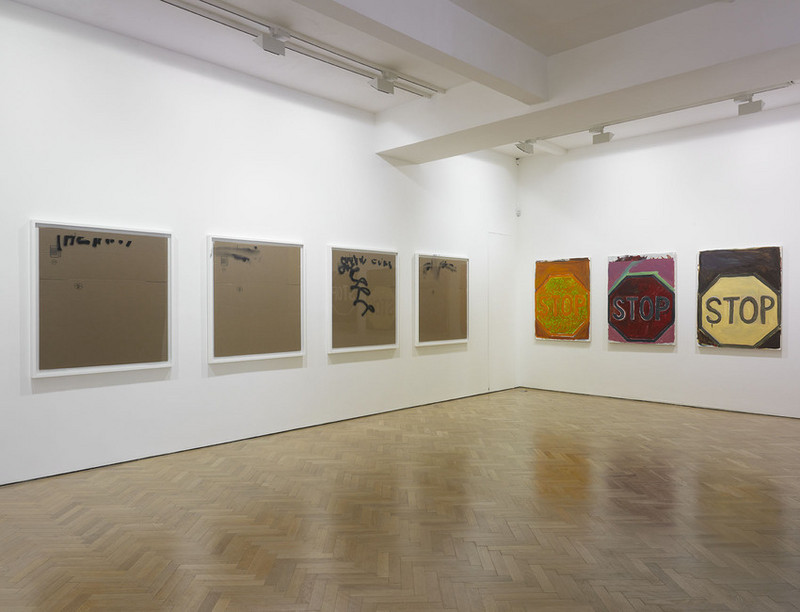 The directors of Blain|Southern are delighted to present Concatenation. Signature, Seriality, Painting, a group show curated by Peter J. Amdam which brings together a number of new works by the artists Matias Faldbakken, Josh Smith, Reena Spaulings and Fredrik Værslev. All of the participating artists examine the protocols of painting, albeit in their own very different ways, deploying the medium’s contingency and pushing at the boundaries of contemporary modalities of painting.

Concatenation is defined as ‘the action of linking things together in a series’, or ‘a series of interconnected things or events ... unlikely to recur.’ Series, signature, facture, mark and trace are all terms commonly used to describe painting. Each term could be included in what we might imagine to be a generalised practice of painting; and yet, of course, merely combining them would not be representative of painting as a whole.

Concatenation. Signature, Seriality, Paintingexperiments with, or creates an experience of what happens if an artist’s ‘signature’ or agency is called into question. By creating tentative dialogues of sorts between the selected works, the axiom of painting is subverted. The group itself appears not as a selection of individual works, but as a whole, open for continuous reconfiguration; seriality therefore becomes, in a sense, infinite.

“The exhibition raises questions over how we might consider painting as an entity in its own right. It presents a mutated, abstract vision of painting which is open-ended, non-subjective and radically immanent – a non-summative seriality which circumvents representation and the idea of painting, to perform something which touches the ‘Real’. Indeed, the ‘Real’ could quite simply be a number, one that cannot be reduced to a concept but is foreclosed to thought, yet infinitely effable.” Peter J. Amdam

For a decade, Josh Smith has relentlessly and rigorously mutated and distorted notions of signature and painting. The artist is known for his extreme prolificacy, and for exploring ideas of authorship and originality. Fittingly, in the new series of stop signs presented here, he links together works with a signified meaning unlikely to be replicated; it is arresting, in and of itself.

Matias Faldbakken presents a new series of works which essentially vandalise and re-contextualise appropriated forms of packing or moving boxes. This violently negates and reconfigures the very basis of an artwork which might otherwise have been understood to ‘contain’ certain identifiable information. To paraphrase the French thinker François Laruelle: the artist is turning his back against the wall while he’s simultaneously trying to find the very limit that is the wall.

Fredrik Værslev also presents a new body of work for the exhibition. In a highly original way, his Canopy Paintings “plug into” the world rather than merely re-present parts of it.

These paintings make immanent the diagram, look, and temporality of the suburban architectural canopy – the result is a somehow democratic discovery of how this kind of painterly materiality amplifies or implicates the world of the arbitrary, functional and even prefabricated.

In a move that distantly resembles the deployment of cardboard containers found in Faldbakken, the fictional artist and gallerist Reena Spaulings transforms pizza boxes into monochromatic forms, upon which vectors are inscribed. Thus the concept of political and artistic agency is enigmatically and playfully explored.

Josh Smith was born in 1976 and trained at the University of Tennessee in Knoxville. Recent solo exhibitions of his work have been mounted at The Brant Foundation Art Study Center, Greenwich, CT, USA (2012) and the Museum Moderner Kunst Stiftung Ludwig Wien, Vienna, Austria (2008). His work is held in many public and private collections including the Astrup Fearnley Museet for Moderne Kunst, Oslo, Norway, The Museum of Modern Art, New York, and the Whitney Museum of American Art, New York.

Matias Faldbakken was born in 1973 in Hobro, Denmark,and graduated from The Academy of Fine Art, Bergen, in 1998. Solo exhibitions of his work have been shown at The Power Station, Dallas, US (2011), IKON Gallery, Birmingham, UK(2009) and The National Museum of Art, Design and Architecture, Oslo, Norway (2009). Group exhibitions include Documenta(13), Kassel (2012). His work can be found in a variety of public and private collections including The Astrup Fearnley Museum of Modern Art, Oslo, The National Museum of Art, Design and Architecture, Oslo,and The Speyer Family Collection, New York.

Fredrik Værslev was born in 1979 in Moss, Norway, and graduated from the Malmö Art Academy, Malmö in 2010. Recent solo exhibitions include Lanterne Rouge, STANDARD (OSLO), Oslo, Norway (2012), LISTE 16, Johan Berggren Gallery, Basel, Switzerland (2011), and The Secrets of Aging Well, CIRCUS Gallery, Berlin, Germany (2011). He has also curated a number of projects including Something Old Something New, Something Borrowed, Something Blue, for Landings, Kornhaüschen, Aschaffenburg e.V., Germany (2011).

The collective Reena Spaulings was founded in 2004. They have had a number of solo exhibitions including to date including ;-), Galerie Chantal Crousel, Paris, France (2012), Reena Spaulings, Galerie Daniel Buchholz, Berlin, Germany (2010), Front Room, St. Louis Contemporary Art Museum, St. Louis, USA (2008), How To Cook a Wolf, Kunsthalle Zurich, Switzerland (2007), and The One & Only, Haswellediger & Co. Gallery, New York, USA (2005).
www.blainsouthern.com