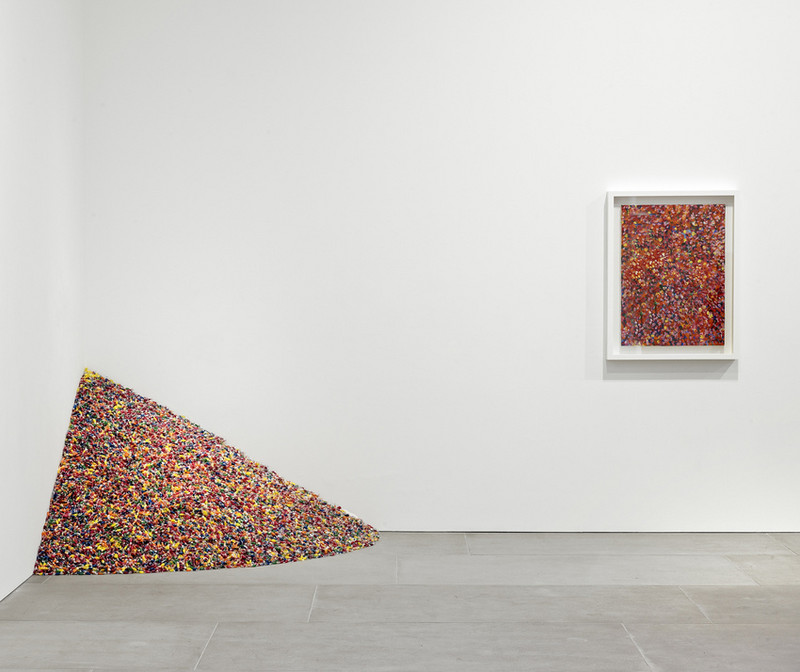 Blain|Southern is delighted to present Candy, an exhibition bringing together the work of the celebrated artists Damien Hirst and Felix Gonzalez-Torres.

This is the first time that paintings from Hirst’s Visual Candy series have been presented together exclusively, and a candy spill work by Felix Gonzalez-Torres will serve as a counterpoint to the paintings. The exhibition showcases the ways in which each artist used the signifier of candy during the early 1990s, exploring questions of pure aesthetics and identity.

Featured in this exhibition is Gonzalez-Torres’ “Untitled”, 1992, a unique sculpture made of candies individually wrapped in variously coloured cellophane. Copiously piled in corners or spread across the floor as glittering carpets, the work can be manifested repeatedly in different forms and can continually change shape through every presentation. Although unique, the nature of the work is such that it can exist in more than one place at a time, and it will be installed in three different forms within the gallery.

The viewer is invited to actively participate, freely choosing whether to touch, take or consume the candy, engaging in a vibrant and multisensory experience. These sweets may be replenished regularly by gallery staff, creating a dynamic and varied ebb and flow. The volume and form of the work is thus altered throughout each day, continual change becoming the only element of permanence that defines the ‘life’ of the work.

Gonzalez-Torres once described how the candy spills were about learning to ‘let go’, a ‘refusal to make a static form [or] monolithic sculpture, in favour of a disappearing, changing, unstable and fragile form.’ Indeed, the candy spills imply that change enables the means for our continued existence; that life itself is in a permanent state of flux. Linear time collapses, as past, present and future coexist within these works, which have the possibility to be continually replenished or to simply disappear; the expansiveness of any moment, beyond the physical, is suggested.

The Visual Candy paintings, which were made between 1993 and 1995, were created as a direct riposte to an art critic who had dismissed Hirst’s Spot Paintings as ‘just visual candy’. Addressing the viewer on a deliberately emotional and instinctive level, these works, abetted by their exuberant titles, among them Some Fun (1993) and Dippy Dappy Dabby (1993), set out to question the implication that aesthetically pleasing art is inherently insignificant.

While ostensibly abstract, the paintings in fact depict medicinal pills, and can be seen as a stylised depiction of the psychological effects of happy, mood-enhancing drugs. Hirst once described how, ‘in every painting there is a subliminal sense of unease... the colours project so much joy it’s hard to feel it, but it’s there. The horror underlying everything.’ In this context, the Visual Candy paintings, despite their surface optimism, possess a disquieting undercurrent of tension and darkness – born from an awareness of the inevitable low that follows any high.

Hirst once said that ‘art is about life – there isn’t anything else.’ The same could be said of Gonzalez-Torres’ work, which finely balances an exploration of personal life, relationships and identity with socio-political issues of public and private space. Moreover, Hirst’s statement that producing ‘series’ of work ‘theoretically helps you avoid death’ offers a sense of timelessness to his practice, and as in Gonzalez-Torres’ installations, suggests that life is transcended through art.

The exhibition will be accompanied by a fully illustrated catalogue, which includes an interview with Hans Ulrich Obrist and an essay by Blain|Southern’s Chief Curator and Director of Exhibitions, Mario Codognato.

Damien Hirst (b. 1965) came to public attention in London in 1988 when he conceived and curated the exhibition Freeze. Now a quarter of a century on since that pivotal show, Hirst has become one of the most influential artists of his generation. Solo exhibitions include a major retrospective, Damien Hirst, Tate Modern, London, 2012; For the Love of God, Rijksmuseum, Amsterdam, 2008; Damien Hirst, Astrup Fearnley Museum of Modern Art, Oslo, Norway, 2005; The Agony and The Ecstasy: Selected Works from 1989-2004, Museo Archeologico Nazionale di Napoli, Naples, 2004 and Damien Hirst, The Saatchi Gallery, London, 2003. The artist has also participated in many group exhibitions including Print/Out, Museum of Modern Art, New York, 2012; Modern British Sculpture, Royal Academy of Art, London, 2011; Play Back, Musée de la Ville de Paris, Paris, 2007; Aftershock: Contemporary British Art, 1990 – 2006, Guangdong Museum of Art, Guangzhou and Capital Museum, Beijing, 2006; Public Offerings, The Museum of Contemporary Art, Los Angeles, 2001 and Pictura Britannica: Art from Britain, Museum of Contemporary Art, Sydney, 1997. His work is included in numerous permanent collections including Tate Modern, London and the Hirshhorn Museum and Sculpture Garden, Washington, DC. Hirst lives and works in London, Gloucestershire and Devon.
www.blainsouthern.com