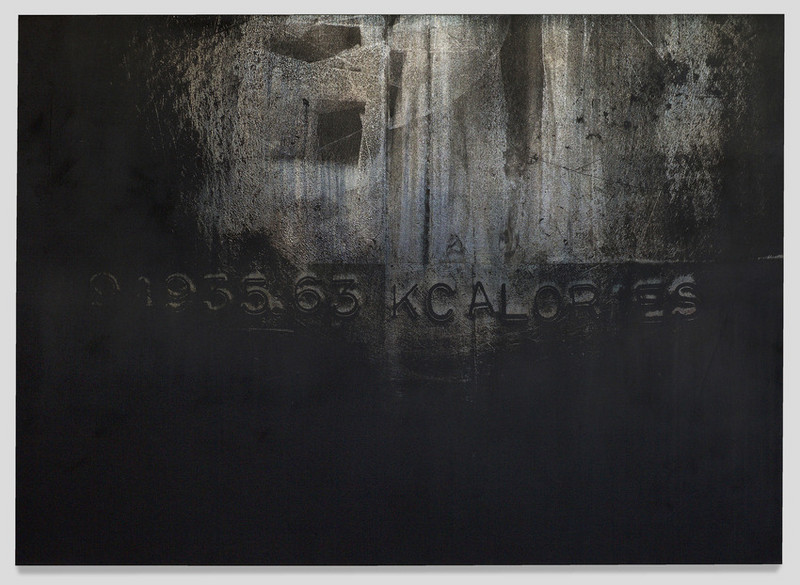 Radiohalo is a major solo exhibition of new artworks by acclaimed New York-based artist Michael Joo. A conceptual artist who works across a variety of media, Joo is interested in themes of energy, nature, technology, history and perception, which he explores through narratives of places, people and objects.

His non-linear, almost cyclical approach results in work that is a documentation of process. Whether chemically treated, silver-coated or photo-based, Joo uses several recurring methodologies, and has been working with silver nitrate for over a decade. His interest lies in the way the human eye perceives the compound but also in the physical, performative nature of its application to other materials. Recently, by combining the chemical with a sensitised epoxy ink, Joo has created a new series of ‘caloric paintings’, several of which are included in the exhibition.

The ‘caloric paintings’ pick up a consistent thread from earlier works, such as The Saltiness of Greatness (1992), where Joo meticulously calculated the amount of energy that historical figures consumed during a lifetime. Here he gauges the number of calories individuals would expend performing various actions. Combining a range of techniques associated with painting, photography, print-making and sculpture, the caloric values are transferred to canvas. By assigning a numerical value to a quantifiable action, the artist questions if there is any significance in this method of categorisation.

Standing at three metres, a marble slab mounted on a steel frame, Prologue (Montclair Danby Vein Cut) (2014-2015), is an imposing new sculpture. It continues the artist’s interest in Cameron’s Line, a tectonic boundary in the US defined by a subterranean belt of marble. The sculpture acts like a billboard or marker, in which a landscape of time, compression and process is reflected in the strata that run through it. Treated with silver nitrate on one side, the refractive surface works as an alternate plane that provides a different perspective, a window to elsewhere – creating a dialectic which is both spatial and temporal.

Throughout the exhibition, Joo demonstrates how acts of creation, life and energy thrive at borders and intersections. A group of sculptures cast from endangered cranes’ legs speak further of his meditations on boundaries, whether geological, physical or socially constructed. The sculptures have been used by the artist to make marks on the gallery wall by dragging their graphite embedded legs down its length. The marks’ fleeting physicality relate to the fragility of a population living in politically contested territory, not bound by borders defined by human agency; and how the incursion of physical space is defined in contemporary culture.

The exhibition is accompanied by a comprehensive 120 page publication detailing Joo’s recent significant, ongoing bodies of work. It includes an essay by Miwon Kwon, Professor & Chair of Art History at UCLA and a conversation between Michael Joo and artist Julie Mehretu, alongside whom he exhibited at Sharjah Biennale 2015.

Michael Joo’s work will also be part of EVA International - Ireland's Biennial of Contemporary Art which opens on 16 April 2016. Further solo exhibitions in 2016 include the Smithsonian, Washington, DC and SCAD Museum of Art, Savannah, Georgia.
www.blainsouthern.com