Tell Me Whom You Haunt: Marcel Duchamp and The Contemporary Readymade 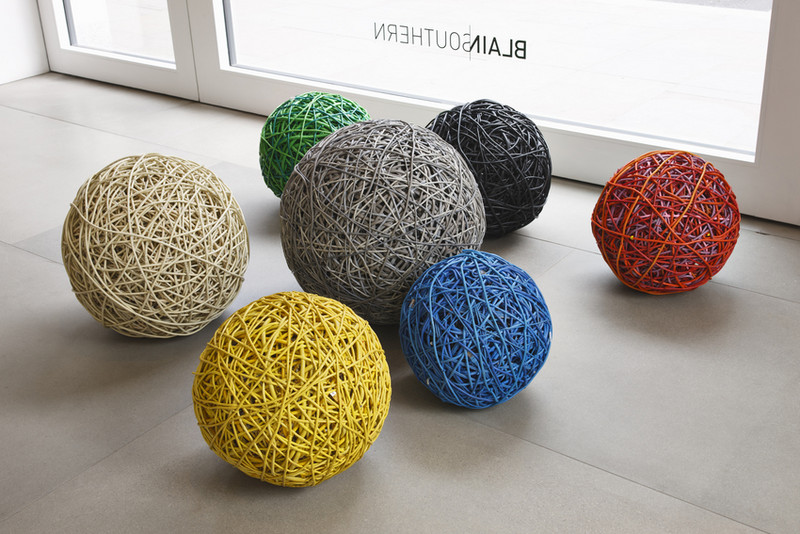 © David Batchelor
Series of Electrical Flex Balls, 2010
Photo: Peter Mallet
TELL ME WHOM YOU HAUNT: MARCEL DUCHAMP AND THE CONTEMPORARY READYMADE
11 April – 18 May 2013

The directors of Blain|Southern are delighted to present Tell Me Whom You Haunt: Marcel Duchamp and the Contemporary Readymade, a group exhibition in which works by ten leading contemporary artists are placed in dialogue with the readymades of Marcel Duchamp. The exhibition examines the ways in which artists today continue to respond to the activation of memory and the phenomenon of ‘haunting’ so present in the unique and progressive art of Duchamp during the early twentieth century.

Taken from an age-old French proverb, ‘Tell me whom you haunt and I will tell you who you are’, the show’s title refers to the idea that found or ‘readymade’ objects relinquish their previous signification and assume a shifting identity whenever recontextualised; they cease to be one thing in order to become another. In this sense, David Batchelor, Jota Castro, Jimmie Durham, Piero Golia, Martin Kersels, Robert Kusmirowski, Olaf Nicolai, Valentin Ruhry, Nasan Tur and Sislej Xhafa could all be seen, much like Duchamp, to be creating contexts for the ‘haunting’ of objects through their practice. Furthermore, their artworks take on the role of post-structuralist memory-objects, where meaning can extend beyond the personal significance of these objects for the artists, into a realm where the viewer’s own recollections or associations are triggered, positing the potential for a rich web of personal readings.

Mario Codognato, Head Curator and Director of Exhibitions at Blain|Southern states: “Objects often have a multiplicity of meanings, dependent upon each individual’s experience of them. This exhibition seeks to explore the alternative meaning(s) bestowed upon objects through their placement in the gallery space, within which seemingly ordinary objects can be redefined as art.”

Among the numerous Duchamp works on display, From or by Marcel Duchamp or Rrose Selavy (Box in a Valise) (1952) best encapsulates the central themes examined within the exhibition. The intricate layering of meaning, typical of Duchamp’s work, is manifest in the literal act of encasing a box within a valise. Contained within the suitcase are a variety of miniature replicas and colour reproductions of his earlier works; a display of memory that also highlights the continuity within his oeuvre. The title gives a nod to Duchamp’s female alter ego, Rrose Selavy, whose signature appears on a number of the reproductions, thus emphasising the mutable nature of identity.

Just as Duchamp was ‘haunted’ by his past works, which initiated constant revisions to the concept of the readymade, so Duchamp himself haunts the work of Olaf Nicolai, Apparition of a two dimensional object as a three dimensional shadow in chocolate (2013), as he presents Duchamp’s profile and silhouetted image in the form of a series of chocolate cakes – calling into question the ideas of transubstantiation and the consumption of knowledge. David Batchelor is haunted by the material remnants of previous projects, with his electrical flex balls originating from a surplus of this material left over from the artist’s disassembly of his lightboxes.

In Robert Kusmirowski’s Doorama (2009), the notion of history as a man-made construct informed by memory and imagination is presented. Four meticulously recreated advertisements for nineteenth century Swedish cosmoramas are exhibited alongside an ornately painted door, through which two eyeholes reveal a voyeuristic view of an artificially-created street scene in Lublin, Poland. Memory also pervades Sislej Xhafa’s work Rocket Ship (2011),in which the artist’s own childhood hopes and subsequent recollections are referenced within the context of travel and migration.

Nasan Tur’s Fortuna (2011) utilises the actual roulette ball from the famous Baden-Baden casino, imbued with thousands of histories of success and failure – the casino itself was immortalised through the writings of Fyodor Dostoevsky whose novel, The Gamblers (1867) was written while he compulsively played roulette at Baden-Baden. By comparison, the found objects in Martin Kersels’ Charms (USS Constitution) (2011) are highly kitsch, with a toy boat and spider’s web being brought together to create the image of the iconic Revolutionary War era frigate when illuminated.

Jota Castro and Jimmie Durham’s works both reference the nature of existence and the processes of life and death, with Castro’s Leche y Ceniza (2008) (which translates into milk and ashes) being comprised of a baby’s cradle, the bottom of which is lined with a mirror that reflects the viewer’s own image back at them. Durham’s sculpture Himmel und Erde müssen vergehen (2000) displays a monumental stone crushing a lightweight jacket, creating unnerving contrasts between weight, volume and material.

Valentin Ruhry will be presenting a site-specific installation that responds to this concept of the readymade and memory, as an old stepladder is wall-mounted and united with a single light bulb to continue the artist’s ongoing interest in the chandelier form. Piero Golia will also reference past works, in particular his sculpture Bus (untitled) (2008),where he crushed an entire bus and presented the mangled form at ART LA. Here, the artist will present the axle from this bus, which is in fact not crushable, cutting it into four pieces of varying length and signing these, thus reappropriating this piece of functional machinery and referencing the memory of a performative act.

Ultimately, every artist in the exhibition engages with the phenomena of ‘haunting’ and the manifestation of memory, or the renewed construction of narratives and their shifting significations. Each object is permeated with a personal and historical significance for each artist, and also, perhaps, for the viewer, demonstrating the interconnectedness of identity and remembrance, and the fluid or malleable nature of meaning.

Marcel Duchamp (28 July 1887 – 2 October 1968), was born in Blainville, Normandy. He studied at the Académie Julian in 1904-5. His Nude Descending a Staircase, No.2, 1912, created a sensation at the 1913 New York Armory Show, but Duchamp rarely painted after 1912, creating the first of his 'readymades' in 1913. These were ordinary objects of everyday use, sometimes slightly altered, and designated works of ‘art’ by the artist. His earliest readymades included Bicycle Wheel (1913) - a wheel mounted on a wooden stool - and a snow shovel entitled In Advance of the Broken Arm (1915). One of his best-known pieces is a urinal, titled Fountain and signed 'R. Mutt', which he submitted to an exhibition of the Society of Independent Artists in New York in 1917. In the ensuing controversy, the concept of the readymade became associated with an assault on the conventional understanding of the nature and status of ‘art’. Duchamp also used readymades as components of his private symbolic language. He spoke of how using prefabricated objects freed him from the 'trap' of developing a particular style or taste. Duchamp lived mainly in New York from 1915 to 1923, in Paris from 1923 to 1942, and returned to New York in 1942. His friendship with Man Ray led to their publication of New York Dada in 1921. From 1915 to 1923, he worked on The Bride Stripped Bare by her Bachelors, Even (The Large Glass), which he considered his most important single work. He died in Neuilly on the outskirts of Paris.

Many of Duchamp’s works were created in collaboration with his friends and colleagues - among them, Gianfranco Baruchello, Enrico Donati, and Man Ray. Select works in this exhibition are a product of such collaborations.

Gianfranco Baruchello was born in 1924 in Livorno, Italy, and lives and works in Rome and Paris. Having studied jurisprudence, economics and later bio-chemistry, Baruchello decided to dedicate his life to the arts in 1959. In 1962 he participated in the International Exhibition of the New Realists, featuring works by Enrico Baj, Tano Festa, Mimmo Rotella and Mario Schifano. The show, organized by Pierre Restany and held at the Sidney Janis Gallery in New York was the first comprehensive exhibition of works from the Nouveau Réalisme movement to be shown in the United States. Over the years, he counted among his friends and colleagues some of the most influential artists, writers, philosophers, and composers, including Marcel Duchamp, Gilles Deleuze, John Cage, Jean-Francois Lyotard, and Alberto Grifi. His practice is comprised of various forms of experimentation with media including painting, photography, film, video, theatre, calligraphy and found objects. Recent exhibitions include Documenta 13, Kassel, Germany (2012); Certe Idee, Galleria Nazionale d’Arte Moderna, Rome (2011); Da allora in pui Baruchello e Milano, Galleria Milano, Milan, Italy (2011); Italian Art Between Tradition and Revolution 1968 – 2008, Museum of Contemporary Art, Chicago, USA (2009); Palazzo Grassi, Venice, Italy, (2008); Gianfranco Baruchello. Flussi, pieghe, pensieri in bocca, Auditorium Parco della Musica, Rome, Italy (2007).

Enrico Donati (1909 – 2009) was an Italian-born American surrealist artist. Born in Italy in 1909, Donati moved to the United States in 1934 to attend the New School for Social Research and studied at the Art Students League of New York. It was during these early years in New York that Donati came into contact with Marcel Duchamp and André Breton, further influencing his practice as a surrealist artist. Donati would go on to help organize and exhibit works in the 1947 Exposition Internationale du Surréalisme in Paris. His practice later expanded to incorporate elements from both Constructivism and Spatialism, reflected in the emergence of texture and surface as a primary consideration. Donati has exhibited internationally and his works are part of world-renowned collections including The Museum of Modern Art, New York, USA; The Guggenheim Museum, New York, USA; The Whitney Museum of American Art, New York, USA; Musées Royaux des Beaux-Arts de Belgique, Belgium; Galleria Nazionale d’Arte Moderna, Rome, Italy; The Hirshhorn Museum and Sculpture Garden, Washington D.C., USA; Arturo Schwarz Surrealist Foundation, Italy.

Man Ray (1890 – 1976), born Emmanuel Radnitzky, was a prominent artist of the Dada and Surrealist movements. Born in Philadelphia, Pennsylvania, Man Ray was a notable figure in the New York avant-garde of the early twentieth century before moving to Paris in the 1920s and 30s. It was in Paris that he became instrumental in both the Dada and Surrealist movements through his photographic practice, as well as through his assemblage pieces. It was during his time in Paris that he began to experiment with various photographic techniques such as solarisation and his own invention, the “rayograph”, which often utilized his friends and loved ones as subjects for his works. Many of his photographs depict Kiki de Montparnasse, Marcel Duchamp and Lee Miller, though he has also collaborated with Francis Picabia and Fernand Léger. With the breakout of World War II, Man Ray was forced to return to the United States and he moved to Los Angeles, where he continued to work for 11 years before returning to Montparnasse. He died in Paris on November 18th, 1976.

Jimmie Durham was born in 1940 in Washington, Arkansas, USA; lives and works in Berlin. From the early 1960’s, active in theatre, performance, literature and in the U.S. Civil Rights Movement. First solo art exhibition in Austin, Texas in 1965. Moved to Geneva, Switzerland in 1969, returned to the U.S. in 1973. Political organizer in the American Indian Movement, 1973-1980, Director of the International Indian Treaty Council and representative at the United Nations. Director of the Foundation for the Community of Artists (FCA) New York City, 1981-83. Moved to Mexico in 1987, left Mexico in 1994 and first moved to Tokyo to participate in a project co-ordinated by Art Front Gallery. From Japan, he moved to Dublin for a group show at the National Gallery. He left Ireland and stayed two months in Gent before his two-years-stay in Brussels. He left Brussels in 1997 for Marseilles (with a five-month residency in Stockholm). He was a recipient of a DAAD in Berlin 1998, and finally moved to Italy.