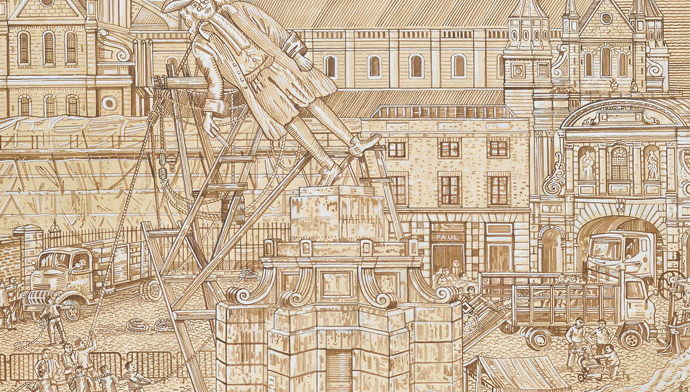 Adam Dant’s ‘The Budge Row Bibliotheque’ encapsulates two millennia of the everyday life and times of Budge Row, the lost street of the City of London.

Responding to Bloomberg’s unique position in the area, Adam Dant’s specially commissioned project for Bloomberg SPACE marks the first part in the 2015 series, ‘The Homecoming’, a programme of four works that explore and respond to the history and architecture of the City of London.

Visual representations of historical documents support the depiction of randomly interconnected historical anecdotes, inscriptions, cartographies, views and vistas. All of these elements collide in a vast drawing which folds time upon time, to create a passage through this lost part of London. Operating like an exploded image library of historical data, the direct encounter between the viewer and the work of art is constructed with minimal means: a single brush and bottle of sepia ink.

Adding another dimension to this cartographic romp through time, is a scale model of a green cabman's shelter, a quaint anachronism from the Victorian era in the centre of the space. It appears as both a fantastical object and a reminder that understanding our antecedents is contingent on a physical proximity to the places they occupied and the purposes they served, even though their original setting may now be physically transformed.

Covert relationships between institutions and people, such as those that exist between the City of London and its diverse population, have long been the subject matter of Dant’s studies. The cabman’s shelter, its interior, and the series of drawings expose a parity between the visual metaphor of the open book and the possibilities of new historical discovery presented by the numerous holes, both architectural and conceptual, in London’s financial district. Tracing a narrative construction of space, time and place through its past and its current inhabitants, ‘The Budge Row Bibliotheque’ shifts and expands our historical gaze.