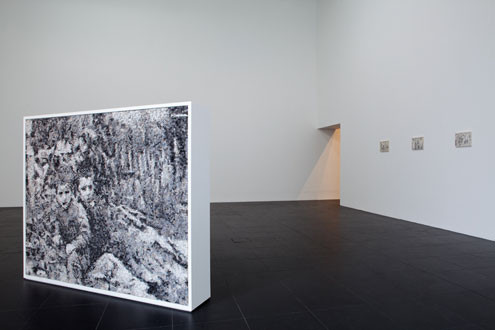 There's no going back. However much you might wish to relive the lost encounter. Nostalgia, for want of a better word, produces that strange condition between pleasure and pain, where you reminisce for a past and are simultaneously troubled by its distance from you. It resists what you know of it. You are not there - where you once were - for good reason. Indeed the scenario you play out in your head might be utterly impossible to re-enact today, in terms of people or place. And even if they were, time moves on and everything looks different again for all the familiarity.

Or you remember it in a different way from how it might really have been, having embellished even the shreds of evidence that you still hold onto. Until you can no longer distinguish between what you once witnessed and what has been invented.

And yet it is almost as if you choose to mourn for that absence as an act of sustained remembrance. Your only fear might be to lose sight of your past memories and to forget entirely. You know that this forgetting seen to its logical ends would leave no trace; at most an anxious sense of something other than here, now. As if all that past had never existed, and there was never that other place that you still might wish to call home. You would not even know you had forgotten anything at all.

Adrian Paci's work is always marked by this sense of absence, taking many forms and inhabiting many genres, each in an attempt to reconstitute that other place, and bring it into parallel with our experience of the image in front of us. An idea of home that is configured somewhere between that elusive past and a quite different present. The image comes at a price. Some part of it is lost in a kind of grainy memory, where context has become detached from its source. But it must be made, made again, photographed, reproduced by any means, as a way of perpetuating an evolving story.

As much as this reiteration cannot take one back - there is no going home - there is always a back-story. The sequence of paintings here, Passages (2010), are images derived from footage of a wedding. It's simply a formal sequence as guests line up to shake hands. But from this perspective, from the outside, detached from the source, the greetings could equally be gestures of condolence at a funeral. (Paci, of course, has addressed this ritual of the life cycle elsewhere, in Vajtojca (2002), where a woman laments in song for the dead body in the image that mystically or comically comes to life.)

Paci likes to work and rework the same materials and sources. The four-channel video Last Gestures (2009) is a quite different scene from a wedding, slowing down to an almost stillness those last embraces as the family 'loses' their daughter, the bride. The images convey an unexpected sadness, in an enigmatic moment that perhaps might be understood to anticipate nostalgia. Here, now, at this last moment, as she passes from one stage of her life to another, there is a sense of loss even within what we must assume is the joy of the event. What is important here is not just the subject of Paci's work, but the way that its recurrent themes exemplify the act of making the image.

Always in fragments or distorted, Paci's art is about trying to piece together a past in a way that constitutes the work of art. The video, Believe me I am an Artist (2000) bears witness to an interrogation where the artist tries to assert his occupation. Ironically, to the viewer, the act of observing this interrogation is the very confirmation his interrogator seems to lack; the interrogation becomes the work. The photographic series Back Home (2001) situates exiled Albanians in a photographed family portrait with a painted backdrop of the old home that has been reconstructed from memory. Genres are elided, memories are distorted, but Paci seems able to bring a presentness to the image for all its looking back.

Paci is a great storyteller, either through a sustained sequence of images, or through a narrative that unfolds with or even against the images on the screen. But how reliable are the stories he recounts? In Centro di Permanenza Temporanea (2007), the camera pulls away from a queue of migrants lined up along an airplane stairway. The camera pulls back to reveal no plane and the isolated figures, framed in absurdity, with no place to go. In Electric Blue (2010), the narrator tells of his role in

the establishment of the first porn cinema in Albania. In all of these reconstructions so often an authentic gaze, using a local non-acting cast, in the manner of Pasolini, a returned intensity that looks back at Paci's camera is at odds with the fictionalizing of a past. In the end what we must believe is the image before us. Humanity is here, with all its longings and desires. But the encounter is fleeting, and the narrative is full of gaps. The grain of the image, the stilled presence of a ritual in motion, or its translation into the painted fresco form, mark those moments of intimacy in life that are all but impossible to understand from a perspective without access to interior motivations, from the perspective of a composed image.

But the encounter is fleeting, and the narrative is full of gaps. The grain of the image, the stilled presence of a ritual in motion, or its translation into the painted fresco form, mark those moments of intimacy in life that are all but impossible to understand from a perspective without access to interior motivations, from the perspective of a composed image.

We might understand, Brothers (2010), the other work in the show in this way. Working in the highly specialised medium of mosaic for the first time for Bloomberg Space, it's a complex remaking of a simple, familiar, type of family image. Two children gazing out impassively. The image must be derived from a photograph or a video still. What could we know of these two? What does the image reveal of their story? Whose children? Where? When? The answer to all of these questions is... little or nothing but the image itself. The medium itself reclaims a banal image, lending it substance, materiality. The process of making the mosaic is analytical and painstaking, rendering blur or distortion with as much scrutiny as any determining facial features or embodied gestures that might have been discernible in the original image. Paci will often rework a found image, or one close to his own home life, into another medium, such as the fresco. A recent work using the same source as Passages for the handshaking ritual is painted onto a giant wooden wheel, so that the images may be read endlessly. The process confers a kind of ritualised ownership over the an image that cannot be possessed.

Elsewhere Paci might push the limits of a medium such as video to become something else again; an image of an image of an image. Britma [Scream] (2009) slows the split second movement of two children (again) to last over five minutes. The reference to Munch's painting is hardly incidental, but not forced. You would not know that the children are chasing a car and Paci's camera, but the blur, the consequence of the camera's motion and its inability to read this passage from one moment to another, becomes painterly and enigmatic. The distortion gathers more authority to it that any crystal clear still.

Much of Paci's work is a demonstration of the conscious act of making the work and making it visible, even if the image becomes unreadable. Paci is always behind the image, and his gaze tells us much of what is before us. But there are at least two Pacis at work here one who sees things as they are, and another, an almost invented self, often an unreliable narrator, who projects tenderly onto the image, how things were, or how they might have been.

This is not a theoretical self-referentiality or institutional critique of any kind, but Paci's deeply felt desire to connect with the face before him and with the context of what he encounters. The work is about making material those fleeting moments in our lives that we only recognize as lost when it is too late. Paci's work obsessively details the encounter, that lost moment, alternately homing in on details to the limits of legibility, and pulling back to make sense of the bigger picture.

In this way the slightest, briefest, gesture becomes monumental; one hand held in another, a bride's tear, a child's gaze. And as much as Paci redeems each one of these all but invisible acts of intense engagement, he constructs - or recalls - a world of complex relations and mutual interdependence. Ethical encounters, intimate moments.

Andrew Renton is a curator and writer. He is Director of Curating at Goldsmiths, University of London
www.bloombergspace.com/