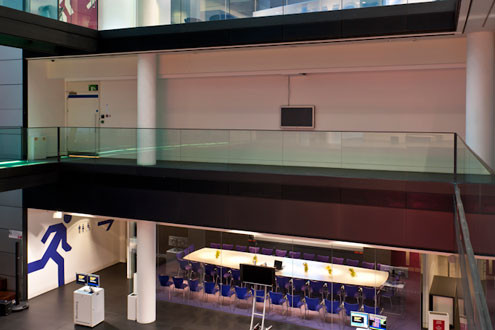 "An error in a landscape. A work that signals itself as an error, continually, in a dead code (its broken rhythm)." 1

Hence reads the inaugural page of Julien Bismuth's book which, along with five video collages and a monumental metal pole surmounted by a white LED light, is to accompany the artist's exhibition at Bloomberg SPACE. All three pieces, beyond their diversity of form and style, embody the same conceptual element: the dual expression in Morse code of the notion of error. Conveyed by two distinct procedural signals (or pro-signs)2 , it intentionally subverts the central Morse rules of inter-character spacing, or tempo, (such as: a dash equals three dots; the space between each parts of a same letter equals a dot; the space between two letters equals three dots...). By repeating, in a broken rhythm, sequences of singles dots3 , the meaning of "error" is assigned to these otherwise nonsensical series of "e". In other words, the Morse code, instead of spelling or abbreviating the word "error," arbitrarily determined two irregular forms, granting the very idea of error an exceptional status.

Within the logic and norms established by the Morse code, to signify an error seems then to involve making one. However, because they are so meticulously codified, these extraordinary pro-signs reveal themselves less erroneous than it first appears, at most erratic: strictly speaking, the characters for "error" don't constitute actual mistakes but mere exceptions to the rule, established by the system itself. Relying on the knowledge of a pre-existing convention, the skilled issuer of a message of "error" doesn't exactly commit one; rather, he paradoxically performs a correct transmission of incorrect data. For a moment only, the Morse code's intentional errors seemed to accomplish the legendary state of a perfect natural language, where the words would entertain an intrinsic relation with their subject.

Nevertheless, fascinated by the symbolical and performative power of these quasi-errors, where the signifier resembles it's signified, and the utterance literally does what it says, Bismuth created a body of work that keeps signaling itself as a glaring error, a dazzling mise en abyme, in homage to two French thinkers of the positivity of error: Georges Canguilhem and Michel Foucault.

Surpassed by richer encoding systems, the Morse code has nowadays become relatively obsolete, being to most, if not a "dead language," at least a cryptic one. It is nevertheless still in use, mainly in maritime communication, in some assistive technologies, and in gratuitous, somewhat nostalgic amateur practices.

The code was originally named after Samuel F. B. Morse, the inventor in 1837, after many years of trial and error, of an electrical telegraph system. Electricity and electro-magnetism had interested Morse already as a student, but his technological vocation concretized itself only later on, with the death of his wife: While on a business trip, Morse received a letter, brought by a horse messenger, announcing his wife's soon to be fatal condition. Despite leaving immediately for his home in New Haven, Morse arrived after the burial. Realizing just then that he had been unaware for many days of his beloved's condition, the American became determined to dedicate his research to improving the speed and quality of long distance communications.

It was a commission in Washington D.C. that prevented Morse from being by his wife's side when illness stroke. He was then working on a painting of the Marquis de La Fayette. Before achieving fame with his invention, Morse was actually best known as an accredited portrait painter and president of the National Academy of Design in New York City. Set in a magnificent sunset, the grave and dignified depiction of the notorious Frenchman, but also his earlier House of Representative (1822-1823) where a modest lamplight glowing in the background serves as the focal point of the monumental canvas testify to Morse's particular attention to the representation of light in his pictorial compositions.

"Imagine a din, a traffic, a confusion, a Babel or babble of flashing lights, screaming horns, pointing arrows, all of them wrong, all of them mistakes, mistaken, as if someone had buried a landscape under a tangle of lines, first drawn, then crossed out so that others could be drawn on top of them (...)" 5

By installing his 8-metres high flickering tower outside the gallery, Bismuth inscribes his work in the complex fabric of contemporary public space, and its forest of scintillating, purposeful signs and signals: beacons, radio towers, city lights of all kinds, plane, bus or car lights, fireworks...so many optical apparitions whose flickering carefully signals, with stubborn redundancy, their mere existence. In its turn, the artist's column, at the risk of going unnoticed, chants in code its useless errors, aimlessly.

Beyond the tautology of this "blinking idiot of a light," 6 Bismuth's threefold corpus echoes another investigation into the realm of tautology: Similarly to Joseph Kosuth and his One and Three Chairs (1965) for instance, Bismuth borrows from three distinct systems of representation (verbal, visual, and sculptural), to invariably deliver to our senses the same paradoxical signs of error.

Be it with his seemingly stolen images of the New York City streets, or his makeshift enactments of the codified "error" signals, Bismuth creates luminous landscapes of enchanted perception. In contrast to Samuel Morse's passion for photography's exquisite minuteness, the young contemporary artist cultivates here a deskilled, vernacular aesthetic, shooting impulsive sequences with the help of any recording device at hand, including his cell phone's camera. Not without derision, Bismuth stages in Long Island, NY, on a shore, or on the top of a hill, his approximate though repeated attempts, here with a signal mirror, there with a flash lamp, to communicate his "errors"; in both cases, the body of the artist disappears sporadically, either in the bright beams projected at the camera, or in the enveloping darkness of Montauk at night.

Conceived by the artist 7 as sketches, or drafts, the videos, but also, I would add, the artist's book, and perhaps even the sculptural apparatus outside seem to function as documentary traces of the real work, situated elsewhere.

"The only constant and constraint is its sequence of signals. The rest is simply a support, a slim scaffold concealed by the obscurity against which the blink which it holds up to our attention becomes most emphatic, visible, and necessary." 8

Radically, the objects on display here all refer, in their various ways, to a fertile interpretation of error, where, besides its conventional conception as the disruption of logic, it stands for a fundamental, positive possibility of life, and the ability of the subject to exercise an original power of alteration...or here, the ability of the artist to keep searching "for the inalienable meaning of things" 9 .

2 "Error" in Morse code consists of either seven dots ligatured together in a short run, or three dots widely interspaced.

3 The shortest element in Morse code, the dot, stands, when used singly, for an "e," the letter most frequently used in the English language.

9 Roland Barthes, Mythologies, trans. Annette Lavers (New York: Hill and Wang, 1972), p. 158: "by poetry I understand, in a very general way, the search for the inalienable meaning of things."
www.bloombergspace.com/