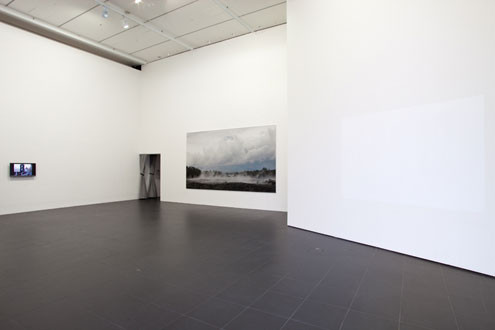 Lidwien van de Ven is hugely exact about the source of image she uses. In pretty much every case she dates the photograph, to hold an image, with its ability to be free and fluid, to the here and now, the actual then. This allows a shift of focus from the artistic general to the lived particular and back again. Van de Ven researches continuously, investigating the combination of political and religious circumstance across the world. Her relation to imagery is pivotal as she brings something of photojournalism into the art place. This allows the artist a back to front relationship with place, her travel conditioned by a sense of knowing somewhere perhaps and in many cases, very well. This knowledge of politics and religion, applies much more than a consideration of the personally observed and felt. Expression, as such, is there to serve an open and expansive representation of complex reality.

Lidwien van de Ven's commission for Bloomberg Space consists at one level in a simple display. A film, one photograph, an image of a black square denoting a break, full stop, end and relief, and, on another wall, a white square denoting an absent image. The context of a gallery allows a particular approach and range of associations to come into play. She admits to seeing in the huge photograph here at Bloomberg Space, the familiar structure of landscape painting, most specifically 17th Century Dutch landscape painting. Aesthetic concerns fall into formal place. There is also, in the film, a fine traceable trajectory to the spare, still, naturally lit interiors of Dutch churches in paintings made by Pieter Jansz Saenredam during the middle of 17th Century. But still, Van de Ven uses landscape often in her work; playing always with the power of illusion, the power of the implicit, the multiple layers of sense and vision that even the most apparently innocent view of a view can carry. Here, at Space, the Indonesian volcano mountain, Merapi, is obscured by cloud. In the foreground black matter is broken into apparently geometric formal components. Although the artist tends to emphatically title the image with the place, date and time to counter the notion of infinity and timelessness that landscape can invariably bring, here at Space the artist does not. She approaches this relatively recent image in a different manner.

Inspired by the way in which ancient Chinese Dynasty painting has complex hidden social and political messages made out of shifting and diffuse ink, coded, with fluid, floating, cloud formations painted over and over again, through decades and even centuries, while there is an open code carried in the object a saint carries in Western painting, for instance, or the message being given to the women in the painting really is an annunciation, the Chinese painting carries a different approach, with varying layers of interpretation embedded within it. Pictorial language is infinitely powerful, but combined here with the artist's work, photography enters from a functioning documentary angle to meet a range of associative comprehension in the middle.

Van de Ven went to Indonesia late last year in search of landscape. Volcanoes always have great power and symbolic presence, but Merapi, inside the 'circle of fire', really did erupt recently; the eruption which started on the 26th October last year spewed volcanic ash on to the surrounding country side, houses and streets for over a month. It is always said in Indonesia that an eruption of Merapi will foretell significant political change. The photograph, reproduced to a great scale here, carries the calm solidity of classical landscape, where the subject, completely obscured by cloud, stands for the geological and political importance it carries. You know it is there somehow, the beauty, the mystical presence. The cloud blocks the view to a brooding life with the power to make or break, not just the lives of people living in the foothills and valleys, and the government in Jakarta, but others beyond.

The black matter, in the foreground is actually the dried river; the earth, still hot when Van de Ven arrived, is broken into Cubistic shafts, or slats. A layer of trees, spied through the still steaming matter, is still, classically, a layer of trees, a horizon. So the burnt river, almost unreal blasted land, like a promontory, gives way to layers of space. The trees of course not the blasted, looped and choppy trees of Cuyp, or the more full of

either Hobbema or Ruisdael, but instead thick tropical vegetation still slightly singed. The enormous sky dominant in Dutch landscape painting, takes up half of the surface, with cloud coming straight down to touch and merge with the still active earth.

Van de Ven is using the image here as an anchor for the exhibition. Opposite, the black square presents an effective emptiness, the place upon which thought and visual language can return or close down. She has used the back square twice before to challenge the role of the visual, to be nowhere, somehow. An almost aesthetic gesture that works in exactly the opposite way. Meaningful in an indirect way, it shows the power of visual language to be subtle and anti-literal, where codes and messages emerge. The white square, anti aesthetic in its lack of texture and work, is really just that. Somehow abstraction, as such, is never the point. The empty image, like an empty page, asks what could be there and what is not being said? Like the clouds that hide the volcano, or the cloud in the Chinese painting, it suggests hidden knowledge and sight.

Van de Ven knows her pictures so well; she presents and re-presents the repertoire, the choice of images exact and distinct, in different situations and exhibitions. Whether urban, rural, grandly architectural, caught, still, printed and COMMA is a dynamic new series of commissions enabling artists to experiment and expand their practice in relation to Bloomberg SPACE and its communities. Forty of today's most outstanding emerging and established international artists will be invited to create new work, installations and architectural interventions in a fast paced succession of exhibitions. COMMA at Bloomberg SPACE reflects the core principles of innovation, engagement, adventurous creativity and education central to Bloomberg's reputation for arts sponsorship. Bloomberg SPACE is open not only to Bloomberg employees and clients but to other city workers, residents and the art community at large. moving, usually from a range of place, source and circumstance, each combination sets up a ricochet of thought that is not so much about establishing a sense of infinite possibility, as conveying a complex and layered actuality.

Both the landscape image and the extended time within the quiet, gentle film from the Mosque in Jakarta, act here as filters, marvelous codifiers with ability to trap and exploit the power of expectation, unashamedly harnessing the almost physical relief that come with aesthetic quality. Van de Ven often uses landscape. She has photographed land with disputed and layered histories; mountainsides with cloud and sky, again, making a play with each other, dry lands too, a multiplicity of layers that carry an implicit history of comprehension, expectation and atmosphere. The deliberate visit, on the recent trip to Indonesia, as in many other cases, to a site still glowing with the afterglow of incident and change, provides the perfect combination of significant incident and formal opportunity.

The filming in Istiqlal Mosque in Jakarta, the largest Mosque in the whole of southeast Asia, carries a real-time continuity about it. Istiqlal, which took seventeen years to construct, was built to commemorate Indonesian independence from the Dutch. Acting in a different way to the landscape where incident has already happened, the time here seems limitless, the continuity both formal and spatial. The women in the mosque come and go, pass through, privately, change their clothes, pray, make up, talk, fold material, twist hair and leave, the light comes through from the outside and throws geometric shafts. The slight and muffled sound is full nonetheless, the spatial volume of a huge building retained within. The relation to reality gives a pictorial quality to the interior space in the film, the use of the windows, the hidden entrance, the place through which the worshippers pass, the film functioning not journalistically as ninety percent of Lidwien van de Ven's work but as a peaceful continuum, of incidental existence where something happens but is not news. The play between documentation, fiction and life lived; affected and affecting, nonetheless, at many different levels.

Sacha Craddock is the curator at Bloomberg SPACE.
www.bloombergspace.com/