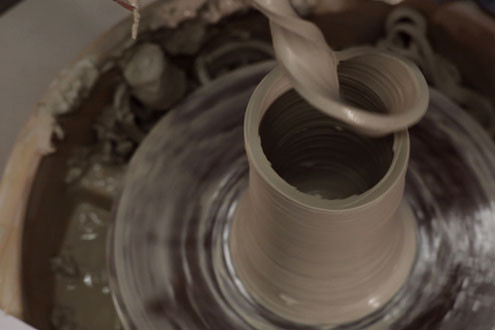 The man pulls open the plastic covering the clay, propping up a photo of a pretty woman next to him at the table as he gleefully rips off chunks with both hands and begins pressing and prodding it into a rough ball. He pokes two holes in the misshapen lump, tacking on two troll-like ears on either side, then adds another mass at the front. His squeezing gets more frantic, his own face scrunching up like the childish bust he's producing as he realises the pitifully wide gap between his own work and the photo next to it. He pinches and pushes at the face of the clay impatiently - "C'mon," he begs, "be a nose. Be a nose!"

Something is taking shape in Linda Quinlan's two-part video Pottery Percussion (2011), Clay is being cut, slammed and spun, forming, always in the act of becoming -perhaps a bowl, a vase, or in the primal rhythms that pulse through the work, it might take on the form of the rampant orifices and playful openings of the 'mud baby' vessels and jugs made by the American ceramicist George E. Ohr at the turn of the century. But the artist in the video seems happy to keep at it, though, incessantly and relentlessly working, remaking, apparently relishing the mucky carry on of mixing and throwing the clay.

The mummy, dressed in full cowboy duds, rises from his latest victim to face his oncoming assailant, a man in an Elvis suit charging at him full speed in a motorised wheel chair. The mummy speaks, a deep guttural scratching in an unknown, ancient language; accompanying the sound, small stones emerge from his wizened open mouth. The forms fly forward through the air, spinning to arrange themselves in front of the creature as a floating sentence of hieroglyphics. Visible for a second before the carved ideograms crumble into dust, the monster lurches forward.

In a moment in Quinlan's MROOUCTKH (2011), the disembodied white mouth that has been mutely and fastidiously opening and closing envelops, like some cosmic trout, the crystalline rock that has been orbiting by. The mouth has been stretching and bending, as if warming up for an event. It mouths and gums at the rock as if trying to feel its shape, to gain some blind, tactile knowledge of it. After a few moments, it releases it again, and the stone continues to spin. But the two bodies have exchanged a sort silent, implicit acknowledgement of each other. The rock, emerging from the mouth, suggests itself as a form of utterance, some sort of speech akin to a comic book speech bubble that physically embodies language, the words here though are embedded in a web of quartz, a sentence in abstract geology.

The first instance mentioned above, is taken from the start of Roger Corman's cynical comedy A Bucket of Blood (1959), which sees the artistic urges of the protagonist's almost overwhelm him as he struggles to work with the material. His anxiety channels itself into an exasperated wish, he wills the clay to become something more that it is. The second moment, a scene decades later in the lineage of b-movies, is from Don Coscarelli's Bubba Ho-Tep (2006), where the villain's few, obscene lines are given the translation miracle of solid, tactile representation - where thought is made into speech, then into object. Between these two moments, from the will to creation through to its surprising eruption, is a volatile, indefinable space. In this space is the sway back and forth between what we designate as 'imagination' and 'reality', where hunches, ideas and emotions gather like clouds to unknown ends. We force and push things through towards their realisation, though what might emerge at the other end may yet be entirely unrelated. It is this space, these liminal moments of boundaries and bravery, frustration and release that are the fertile, restless subject of Linda Quinlan's practice.

Quinlan's new body of work at Bloomberg SPACE grasps at raw, unfired clay as both a subject and a pervasive conceptual metaphor. Clayimmediately, and unintentionally, summons up an image of a 1970s crafts activity, of earnest homemakers in lightly smudged smocks spinning bowls pleasantly in their basements. But here, clay's given a much cooler, and more ephemeral makeover. There is a soundtrack, it has its own music video. Nowhere in the space does the material itself appear physically, but the colour, sticky, slippery texture and its innate sense of potential, literally permeates the work. Clay, as particular form of decomposed granite, is composed of silicone, oxygen, aluminium, and hydrogen. Its molecules are ultra fine hexagonal crystals, arranged in stacks of layers that enable it to mix and stick with other lumps of clay. Quinlan has a long-running interest in crystal and rock formations, as manifestations of the almost innumerable forces and coincidences acting to shape and create a particular expression of solid mass. Clay is malleable crystal, imbued with the ability to be manipulated, shaped, and prodded by the human hand.

In the 1968 essay A Sedimentation of the Mind Robert Smithson speaks of a broadened, irrational sense of 'oceanic thinking' and 'geologic time.' "One's mind and the earth are in a constant state of erosion, mental rivers wear away abstract banks, brain waves undermine cliffs of thought, ideas decompose into stones of unknowing, and conceptual crystallizations break apart into deposits of gritty reason."1 In the back gallery at Bloomberg SPACE, we hear the intonation of a voice half-singing of an 'opal eye archive.' It would seem Quinlan's archive is an unending formation, an endless open account of making and re-making. The clay never arrives at any finished form; this is a deliberately unfinished body of work that attempts to temporarily pin down or delineate the moment of creation but still also admits the impossibility of such a task. Through the disjointed choreography of the sound, image, and objects, we can project or imagine where process might lead to, but we are asked to think of the formations beyond itself. Quinlan's creative geology branches off in to small eddies of possibility, slick patterns in silt quickly change, and currents that point the way but leave us to find for ourselves what 'the new mineral' sung of in the sound work Opal Eye Archive (2011) might be.

Quinlan's touch is decisive and ambiguous, creating a shifting space of constant movement and permanent emergence. There is a paradoxical movement in the sometimes insistent rhythm that reverberates around the clay-coloured columns. This exists in the suggestion of mass and nothingness and in the lyrics we hear, "There was an O on the inside/Taking me and out of solid." In his musing on silence and literature A Voice From Elsewhere (1992), Maurice Blanchot wrote, "There is, in the experience of art and in the genesis of the work, a moment where the work is still nothing but an indistinct violence tending to open up and tending to close, tending to exalt in a space that opens up and tending to withdraw into the profundity of dissimulation."2 This body of work seeks to extend, to examine, the precarious and muted moods just before the finality of creation. As such, it also delineates both the explosive potential and intractable limits of incessant becoming; Quinlan knows that clay can't be a nose, but it can be shaped, worked and re-worked to always be becoming one.

Chris Fite- Wassilak is a curator and writer based in London