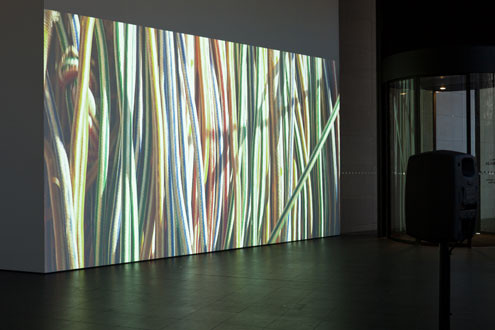 The Brazilian artist Marcellvs L. creates a tangible physical staging of time and slows it down in a very particular manner. Marcellvs sets the most commonplace objects in a state of perpetual duration, and all is seemingly detached from reality. The subjects he films–whether from very far away or extremely close–cease to be subjects and become constant beats in the continuity of general existence. His approach underscores the process, event-oriented, nature of films; nothing happens in these works, which carry a radically anti-narrative structure.

Marcellvs forges on with the aesthetic of raw visual material, asserting, through the pixels and electrons that remain visible, that their status is incidental and unfinished. The only actual event, however, is the extension of time, where duration becomes the real protagonist. The physicality produced by the sound and rhythm of the films makes the videos into passages for the viewer; the films turn into spaces of transit for the confrontation of possibility.

Marcellvs choreographs two audiovisual works and one sound piece for his COMMA commission at Bloomberg SPACE. Appearing in a darkened gallery with a window open to conserve the architectural features, Marcellvs's video projection of a very closely filmed bright fishing net being wound in and film of people far, far away in the distance, carries a breaking, lighting relation to sound, which is much more palpable than the shifting relation to subject brought through sight. The sound, a mixed resonance of strings, waves, and muffled boat engines, was in fact recorded on a boat transporting a grand piano across the Venice lagoon. Two contact and two omnidirectional microphones were positioned on the sound board of the grand piano, and the sound of the lagoons is filtered by the acoustic properties of the piano.

In his audio and video installations, Marcellvs L. harnesses customary notions of time in an attempt to engender altogether different forms of temporality. These investigations posit a viewer at their centre where a relay between different registers of sound and image play off one another in synchrony and asynchrony, unmooring conventional modes of hearing and seeing, even modes of perception itself. Here, one’s senses become soft, mutable, elastic, often unaware of the physiological effects the works demand and produce, at times activating previously unencountered or unforeseen short circuits of cognition and affect. These short circuits forge ways of experiencing time through extended duration. Unlike classical filmic time, which either shows action (mimesis) or tells at story (diegesis), in Marcellvs L.’s installations, there is no narrative, no actors per se, no script: just a digitalised, ever-flowing temporal drift in real time. And to where does this drift lead us? What knowledge do we gain; what feeling do we experience from it?

For Marcellvs L. the drift is fundamentally about the act in itself and not a means toward a prescribed destination or idea: it’s about tentative negotiations, brief junctures, and momentary transversals between image, sound, and one’s own body. Here time is not segmented or structured through traditional procedures of film editing or camera/lens movement: all the artist’s videos are shot with a fixed camera on a tripod, with no special effects or manipulation to speak of other than what the digital camera performs itself. The viewer’s experience of time is broken down very slowly, rhythmically, by almost imperceptible nuance and detail. The drift of time is situated in a kind of distributive, transformative time, where, one witnesses little action on screen, because “the action” is in fact the dilation of perception as to the opening up of time, reconfiguring it.

Perception itself is both physiological and socially constructed and therefore historical. The way we see and hear always involves a constant intertwining of attention and distraction, absorption and withdrawal, states of reception that organise our relations to the world and filter and regulate subjectivity from within and from without.i With Marcellvs L., we enter into a world that materialises the conditions of reception, at times literally embodies them, albeit in very subtle ways. It is a world seemingly slowed down, often unintelligible, and sometimes imperceptible, where a series of nonevents occur over what appears to be protracted time: things happen but where or why is uncertain. These moments of uncertainty are only heightened by the disconnect between sound and image and by the obscurity of the image itself – the camera is always too far or too close to its subject.

In 2002, the artist began an ongoing series of works called VideoRhizome, recalling philosophers Deleuze and Guattari’s concept of a de-centred open network without beginning or end, one that is always becoming, making only momentary alliances with other networks: unlike a root or tree, it is a map of multiplicities.ii It is not the works themselves, that is, their “content” as an illustration or embodiment, that the artist aligns with the concept of the rhizome but rather the recursive structure he organises around it: how they are made and distributed. The artist finds a situation, a setting, for example, a man walking down a road or crossing a flooded road, a snowstorm, ostensibly banal occurrences that through the chance encounter become “events,” or rather, an endless chain of “becomings.” The artist explains it thus:

“I seek out the interrelations between events in their contingency, which are in some cases frustrating and in others surprising. The pieces thus produced are assigned a four-digit number chosen at random (for example, 0667, 5040, 8246), resulting in an unconnected sequence. In a second step, I open the telephone book, from the city in which I live, to a random page and determine whether there is any relationship between my current address, the address in the book, and the numbering of the works. If there is, I send a tape of the piece with the matching number (to the street number, the door number, or the telephone number) to that address. The tapes bear no return address, only a stamp with the number of the piece. In the end, it doesn’t matter who receives them, how they are received, or what the purpose is. What matters is the accidental and fragile encounter between occurrence and nonoccurrence: between the one who produced the images, those who can be seen in them, and the one who receives the tapes via mail. To date, I have made 27 videos and mailed 3,300 tapes.”iii

0075 (2004) was shot on the beach in Garapuá, Brazil, and like many of the works from the VideoRhizome series, employs and exploits the long focus of digital videotechnology: the artist was stationed a kilometre away from the action, rendering the images we see over four minutes and forty-eight seconds abstract, undefined, and hyperpixelated – “poor images” resembling those nth degree generation, images found on the Internet or as bootlegged videos.iv We see silhouetted figures in fuzzy, barely perceptible formation, like a procession of some sort, moving backward to the left of the screen as if the video were playing in reverse only to be interrupted by more figures returning to the right of the screen out of shot, appearing once again leftward in a looped circuit. The figures, which appear indistinct in bleached out white, with random bits of color, resemble microscopic entities or animations moving again and again across the screen, but because there are no clues as to their location or activity, the effect is one of utter dislocation until we are able to hear the sound as it comes into focus: underneath a relentless industrial hum, lies the wind and the clocklike movement of waves making “visible” a group of people hauling in a fishing net from the sea. What is relevant here is not so much the event (a portrait of working life from the artist’s native country) but rather the contingency of the encounter itself and how in turn its “capture” will “return” in other encounters, other situations, as part of a larger, centerless, rhizomatic structure.

Unlike 0075, and its structured mode of production and distribution, Toga (2011), the second element of the artist’s COMMA exhibition, stands alone, and in fact is shot in close approximation to its object (1 metre). This closeness, of course, presents another kind of visual abstraction (like 0075) wherein vivid colour, texture, and movement modulate our degree of attention. In this work, as with others, the 15-minute duration envelopes us to an uncanny degree; the 8-by-5-meter projection truly pulls the viewer in and out of focus, although the camera remains locked off as in all of the artist’s work. This push and pull of legibility and attraction is grounded by the image’s lack of context, its locus coupled by the lack of acoustic cues from a soundtrack. The paradox is that we are “left at sea” while watching a mechanical rotational system in Reykjavik reel in a trawler boat’s ropes and nets in real time, subdivided into four “scenes” where the bundles of red, yellow, green, and blue ropes and nets are pulled vertically and horizontally across the screen.

The four-channel sound piece Klavierwellen or Piano Waves (2011) in effect unites the two video elements of the exhibition, extending the maritime motif this time to Venice. The piano waves we hear are literally just that: while on a residency, the artist upturned a piano on a boat traveling around the canals, on which two contact microphones were attached to the soundboard and two micro omnidirectional placed between the soundboard and strings. The movement of the boat through water creates a kind of roving ambient experience of place but with no identifiable coordinates to define the locale. We are once again adrift. But this drift of sound as well alters the experience of duration in the installation of which there are four spatialised “movements”: Toga and 0075; Klavierwellen; Toga and 0075; and then Klavierwellen. And although the visuals are the same in movements one and three, the sound is always different throughout. The installation confronts the viewer with multiple loops of sound and image (or sound without image) in its forty-one minute circuit, untethering her senses along the way.

Marcellvs L. shows us that the radical contingency of the encounter in space reveals the limitlessness of “mediated” time and its possible reconfigurations, its ability to produce new forms, to “reinvent itself.”

David Bussel is a writer and curator based in London.