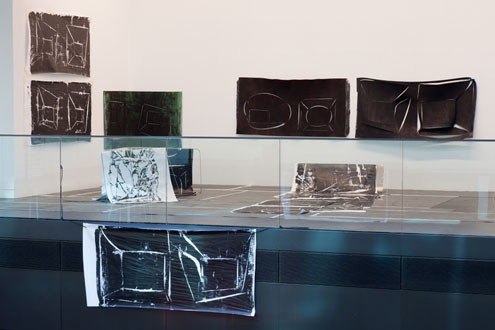 A fluent understanding of the associative potential of material lies behind the quiet arrangement of a Nora Schultz installation. Schultz's work walks a fine line between physical interaction and conceptual lead; her sculptural installation is as much to do with the significance of function and language as the experience of discovery. Concerned with the way in which she brings objects together, the relationship she generally establishes between elements combines the three-dimensional possibility of connection with a thrill of mutual physical dependency. Together, or as one, her works create an ongoing sense of exploration, as the possibility of more and more layers of understanding is revealed.

For Bloomberg SPACE, Nora Schultz will step away from a perhaps more static relationship to material by establishing, through simple means, a structure that is able to produce more material. She aims to bluntly question the value of work through a close relation to basic materials. Taking a brick as the starting point, she will look at how it can imprint both with its three-dimensional volume and flat surface. Through establishing a sort of print works, or lo-fi factory for both brick and paper, she aims to deal with notions of overproduction by establishing a slow-paced production of information. This rather lumpen press will function as a working press throughout the show to produce material more close to its means of production than to a source of separate value. Brick by brick, A4 paper sheet by A4 sheet, the installation will stay as self-contained as any sculptural installation. Despite the idea of the constant reproduction of image or object, the manual nature of the process allowing for subtle changes in individual printing, the delicate installation will add to, and expand the original idea of the show.

The traditional building materials of bricks and mortar have in recent times become symbolic within the jargon printed on the finance pages of newspapers. “Bricks and mortar” denotes an investment in property or the once standard business model of physical stock stored in an actual building bought and sold through a faceto-face interaction or at least a verbal or written agreement. This last stands in opposition to the so-called “electronic commerce” of the Internet and other computer-based networks. The notion of a stable, tangible ‘bricks and mortar’ asset has gained currency through the rise of its shadowy, virtual other but its very naming appears to point to its demise: If bricks and mortar describes a material value that can be seen and calculated, literally counted metre for metre, stone by stone, the advantage of its opposite consists in its fluid, immaterial state, its ability to adapt and be shaped by the forces that prevail upon it. Whereas the power of one is immutable, stable and solid, the other is a dynamic shapeshifter of supreme athletic form.

Nora Schultz’s sculpture, photographic, film, and performance-based works appear to dramatize the character of this opposition. Solid, immutable elements are met by suggestions of speed, technology, and information. Materials weigh upon their carriers, wooden boards sag on table legs, metal poles pull down upon lengths of rope, paper falls from a height, a piece of rubber matting or a sandbag anchors a wire frame. There’s a heaviness to Scultz’s palette: charcoal greys, polar whites, earthy browns, and the occasional flash of a corporate staple like royal blue. These are coupled with symbols and ciphers, printed text, numbers, a graphic representation of an arrow – such elements appear to be not so much part of a familiar language as fragments of a strange and mysterious code.

Sculpture is assembled from materials that appear salvaged from skips and scrap yards. There might be crumpled pieces of metal, scuffed fiberboard, grazed paintwork or rust. Bent out of shape or damaged beyond

use, these fragments often appear as if they have been dragged into the gallery to become the subjects of intense scrutiny. They lie about the space in apparent disarray like the artefacts of an industrial archaeology. Shultz appears determined to make the dead matter speak: it’s occasionally pushed into the form of a number or letter, deposited in ink, pressed against paper, or photographed and photocopied in her magazines. The opacity in Shultz’s work – the combined effect of the dead weight of the materials, the periods of blank code, and the abstract information that she elicits from found objects – choreographs certain dumb moments in the process of reading. An encounter with her work appears designed to make the brain halt and fail in its first attempts to process a logical account. Its willful obscurity acts like a protest against the so-called “fast time” of the information age. Literally dragging cognitive activity into step with its own primitive tempo, it invites us to search its contours for details of an object’s manufacture and use.

The focus of this work is deeply psychological. Its blankness is a strange interruption within a typical, daily, information-rich experience. We are entreated to step out of sync with a dominant culture that has taught us to be adept at double-screening between emails and television or sprinting along with various streams of media, scanning one topic, searching for the next. To engage with it is to become drawn into the “slow time” of its material fact, its bricks and mortar. As if to underline this point, Shultz often refers to systems for measuring or quantifying, typically the signs, symbols, and activities involved in describing matter in terms of its size or weight. Rather than elucidate these abstract systems and graphic ciphers that embody the more ephemeral, fluid part of Shultz’s work, picture information in its raw state. They are the building blocks, the bricks and mortar; scattered in disarray, they seem likely to make us falter or change course.