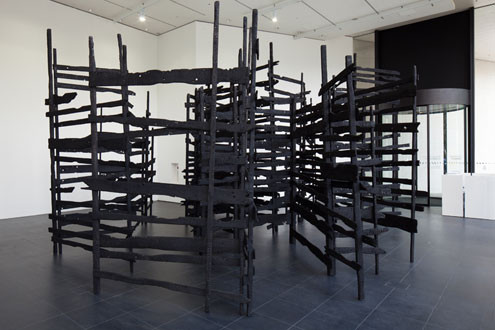 © Gereon Krebber
Installation view
COMMA 37: GEREON KREBBER
As if there was a tomorrow
14 July - 27 September, 2011

German-based artist Gereon Krebber's commission at Bloomberg SPACE will show a single, individual construction made out of charred and burnt timber, which will inhabit the front space of the gallery. Standing almost four metres high, it will be possible for onlookers to see through and walk through the cleverly connected pieces, which will seem more like a forest of posts than a hut.

Sharing some of the preoccupation we have with the future, the piece will resemble the transitional sense of a building site, where all is in a state of flux. The structure will be more of a dystopian playground, where something still tied to the actuality of material has been delayed and somehow caught at a stage before fruition. In ruins already, but with no history narration or narrator, Krebber's piece will connote the sense that something, perhaps a confrontation, has already taken place, that we have arrived at a place where something has already happened.

In the final scenes of the Coen Brothers' The Man Who Wasn't There, the film's central character Ed Crane considers the parallels between the symbolism of the maze and his life. 'While you're in the maze you go through willy-nilly...banging into dead ends,' he says, 'but get some distance on it and all those twists and turns, why they're the shape of your life.'1 The maze as metaphor for intellectual confusion and existentialist questioning is a well-used trope in film, fiction and ancient myth. The treading of its pathways may lead to danger, eternal imprisonment or garnering of esoteric knowledge at its centre. In his commission for Bloomberg Space, As if there was a tomorrow, Gereon Krebber presents us with a labyrinthine structure constructed from burnt timber and arranged into numerous, intersecting panels that reach high into the gallery space. On entering this vast, burnt forest we are presented with some decisions. Do we turn left or right? Forwards or back? A wrong turn may quickly lead to a dead end, a different pathway drawing us further inside. Through charred slats we glimpse adjoining pathways, the outlines of the gallery space and the comings and goings of city life outside - but then as abruptly as our journey began, we are unexpectedly spat back out into the outer world of the gallery, the path we have ventured on without destination.

An encounter with a work by the German artist Gereon Krebber often sets off a chain reaction of questioning within the viewer. 'What is it? What is it made from? What does it mean?' we might ask. An attempt to figure it out, to name our experience and gain intellectual mastery over what we are looking at, may lead us to a series of cognitive dissonances. The surfaces of Krebber's works seem familiar yet completely alien. His bulging, lumbering forms may make us laugh whilst simultaneously unnerving. We may feel a sense of disquiet or disorientation when rationally knowing that we are safe within the confines of the gallery space and that what we are experiencing is illusion.

Krebber frequently works site specifically, responding to the given parameters of a space. Often attracted to marginalised areas such as pillars, the corners of rooms, beams, he creates friction and overlap between art and architecture. When he ventures into the main gallery, as in his new work for Bloomberg Space, he invariably creates works that further alter and shape our navigation and experience of the environment. Large, luminously coloured puddles of gelatine may spill across the gallery floor, forcing us to take the long way around; doorways may be obstructed by cumbersome objects that require us to squeeze past. Krebber's work for COMMA 37 shows a new development. As first explored in his burnt out hut Abgebrannter Stall (2010) at Kunstmuseum Bonn, instead of altering the gallery space and viewer's movement through it by means of architectural intervention or unexpected placement of works, Krebber has created a separate interior space. Much like Bruce Nauman's corridor installations from the 1970's, these new works create a different phenomenological experience for the viewer, their movement through space and time taking on a different quality. A journey through Krebber's maze may evoke feelings of disorientation and uncertainty, trepidation or excitement. His works are ultimately sensory experiences which encourage active engagement from the viewer both from a physical standpoint, as they manoeuvre around or in them, but also from a psychological perspective as they question their form and function.

Krebber uses commonplace, every day or industrial materials to construct his works - packing tape, timber, cling film, polyurethane and cement to name a few. Timber boards may be wrapped in layer upon layer of cling film, their forms gradually engulfed and deformed by a glistening, cutaneous veneer. At other times, such as in As if there was a tomorrow, timber is brought to the edge of destruction by drilling, puncturing and burning. Through the process of construction the materials used undergo a metamorphosis, their original form and function rendered obsolete.

Despite this transformation, there may be something familiar, although not immediately decipherable or easy to articulate about Krebber's surfaces. The dissonance that this evokes - of something familiar that is also strange and alien - may mark our first encounter with the uncanny. Feelings of the uncanny, as explored by Sigmund Freud2, may also be awakened where there is 'intellectual uncertainty whether an object is alive or not, and when an inanimate object becomes too much like an animate one.' Krebber's works, like Sarah's toys in the Labyrinth (1986) or the figure of the Nutcracker in E.T.A Hoffman's story, can appear to oscillate between being alive and dead, decaying or becoming, caught in an uneasy state of suspended animation. We might view them squished tightly between pillars or straddling beams and creeping up steps, perhaps waiting for the lights to be turned off to move again.

Increasingly, the dead pan humour that was so prevalent within earlier works has been pushed further into the background, the tragicomic replaced by something more sinister, parasitical and apocalyptic. In other works the inner force appears to have become disembodied, unseen and violent, leaving a trail of bored holes in its wake or as in As if there was a tomorrow, reducing a timber structure to a charcoal shell. This shift towards the dystopic within Krebber's work has grown in tandem with the global financial crisis and subsequent aftershocks. He has claimed that his work is not political, however in certain contexts, 'I cannot resist....I want to go where it hurts.'3 Let the Pig's Pay, he exclaimed in his solo show at Christian Lethert in 2009 - a show littered with pig entrails and mobiles made from their ears and trotters. His recent solo exhibition at the Highlanes Municipal Gallery, Drogheda, resembled a post-human, apocalyptic landscape filled with parasitical forms and structures that appeared to be in the process of being devoured by radioactive worms. The title of the exhibition Here today, gone tomorrow could be viewed as a comment on the state of the Irish economy and cycle of boom and bust that the country has endured, as a well as a reference to the temporal nature of many of his works. Krebber is happy to mine these ambiguities, to keep things vague, whilst simultaneously digging around in detritus.

In his work for COMMA 37 Krebber responds directly to the overlaying function of the Bloomberg building and its place within what he has termed the 'heartbeat of global capitalism'4. His maze could be interpreted as a metaphor for the capitalist system itself - burnt out, its structure precarious, but still standing despite the violence of the unseen force that has raged through it. As Ed Crane touches on in The Man Who Wasn't There, when he considers the clarity gained from stepping back from the maze and 'seeing it whole',5 the maze embodies two opposing forces. On one hand, those entering Krebber's structure may be confused and disoriented as they navigate their way through forking pathways. Conversely, those outside (or with recourse to a bird's eye view or map) will see structure and order in its construction. This duality, as explored by Ilana Shiloh in The Double, the Labyrinth and the Locked Room,6 reveals the maze or labyrinth as not only a puzzle to be solved with the aid of Ariadne's thread, but as a symbol of both order and chaos.

In As if there was a tomorrow, Krebber shows a system that is not completely destroyed - order may appear to be functioning around us and on the surface city life continues as normal. Nevertheless, Krebber's work highlights that the system we exist within is perhaps not as controllable as expected due to its own complexity. The devastating force that has swept through Krebber's maze could be seen as a violent wind of change which has blown away certainty. To return to Freud, the uncanny derives it terror not from something external to us, but from an alienation from something familiar which has been repressed7. In relation to Krebber's work, this repression could equate to an unconscious fear of death or fear of the world as we know it ending. As Slavoj Žižek has commented 'It's possible to imagine the end of the world; it's not possible to imagine the end of capitalism.'8 Krebber comes to no conclusions about the future of capitalism and makes no moral judgement. Instead, he mines the ensuing friction with great relish, going where it hurts and bringing the audience with him. Enjoy the chaos.

Jacqui McIntosh is an independent writer and curator based in London

3 Email correspondence between artist and author

6 The Double, the Labyrinth and the Locked Room: Metaphors of Paradox in Crime, Ilana Shiloh p6, Peter Lang Pub Inc, 2010