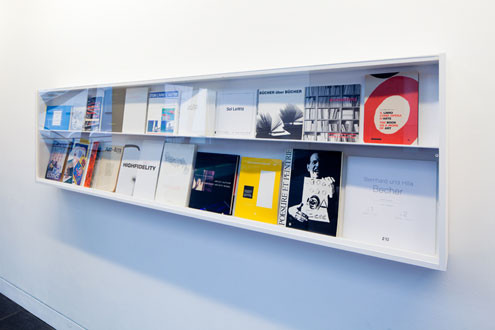 For Comma 38, artist and publisher Arnaud Desjardin will exhibit new, old, rare, and popular books while running an active printing press in Bloomberg Space. His COMMA commission, part of an ongoing project titled The Book on Books on Artists' Books, is intended to create an active and participatory review of current and historical practice. This exhibition is about both the display of books on artists' books and the production of a book about the books displayed. He intends to print a first edition, a book of books, a critical anthology and source book, in which a large range of books on artists' books will be displayed in a series of vitrines.

Artists' books have normally been sold and distributed through small networks of bookshops and galleries that often produce lists of available titles in printed form. The advent of the Internet has meant that information online has changed the nature of this documentary evidence. Desjardin's unique and extraordinary combination of display and production makes an exhibition that actively engages in both the making and disseminating in real time. The books themselves become both vehicles for information and documents that testify for artistic activity in its own right.

Over the centuries books by artists have taken many forms and have had diverse origins. Early in the twentieth century books by artists found a place in the art museum, the art gallery, and in the private library, as limited editions or luxury editions, often produced in tandem with lithographic prints. The engines behind this phenomenon were mostly Parisian dealers and publishers, such as Vollard, Kahnweiler, Skira, Tériade, Iliazd, Maeght and others. Consequently, even in England, books of this kind were generally called 'livres d'artistes' rather than artists' books.

The overturning of this paradigm took many decades, and the less high-faluting language used to designate a different kind of 'democratic' publishing only really took hold in the 1970s, a decade after the publishing house sometimes known as Heavy Industry Publications, of Hollywood, California, had contributed to the supplanting of the earlier paradigm. This new species of book making was soon termed simply 'artists' books', and while this phrase has no real specificity, it is useful as a catch-all for the disparate kinds of publications that comprise the field. These new non-precious artists' books were soon characterized by their multiplicity, affordability, portability, and even expendability. Furthermore, the once prevalent apparatus of signing and numbering books was quickly jettisoned and artists' books were soon to be found in coat pockets, in the mail, and even in some regular bookshops.

The ironic trade name, Heavy Industry Publications, reflected the outlook of its principal mover, the artist Ed Ruscha. In Artforum in 1965 he said of one of his publications that: "One of the purposes of my book has to do with making a mass-produced object ... I am not in sympathy with the whole area of hand-printed publications ...". This attitude set the tone for most of the new 'artists' books' that were to follow.

It was not only the terminology that changed over a decade to reflect this new relationship between artist, book and owner, for the art world phenomena of exhibitions, critical commentary, feature articles and ultimately institutional acquisition also came into their own in the 1970s. Thereafter, as evidenced by this exhibition and its catalogue, secondary documents began to proliferate, and have continued to, right up until today. As is typical of any new phenomenon, or newly conceived phenomenon, magazines were the earliest sources of information on the topic in those pre-internet times, followed after an interval by exhibition catalogues, distributors' catalogues, and latterly books.

In parallel with this expansion of documentation, there was a growth in the establishment of collections, or so-called archives, and of specialised bookstores, notably Art Metropole in 1974, The Archive for Small Press & Communication in 1974, Other Books And So in 1975, Franklin Furnace Archive in 1976 and Printed Matter in 1976; these collections built upon the example of such earlier entities as the Archiv Sohm and the Jean Brown Archive. It is interesting to note in passing that there has been a symbiotic relationship between specialised collections and specialised bookshops: Art Metropole was both archive and bookshop, the bookstore Printed Matter and the Franklin Furnace Archive were adjacent for a while, and Other Books And So metamorphosed from a bookshop into an archive. The mostly skinny publications now designated 'artists' books' also found their way inevitably - via the book trade and other channels - into libraries, all the way from the US Library of Congress to small college libraries - not that the recipients could always divine their nature. Was Twentysix Gasoline Stations, for example, an architectural book?

The progress of post-war art was such that the printed manifestos of earlier times tended to give way to publications that were closer in nature to the art that they fostered. This was especially the case with what came to be known as conceptual art. With the active support of such dealers as Seth Siegelaub, artists began to blur the distinction between documentation and art; often ideas expressed only in words became paramount.

So if it was already difficult by the end of the 1960s to decide whether a publication was primary or secondary, the problem would only get worse. For example, artists frequently began to treat their exhibition catalogues as printed art works. And, again, as early as the mid-1970s, a magazine like Artforum seeded 'pageworks' among its advertisements. Thus it was that the bibliography of artists' books became intertwined with artists' books themselves. An early Printed Matter catalogue was designed by Peter Downsbrough; does this mean that the booklet belongs with his artists' books? Apparently not. An Art Metropole catalogue included pieces by Lawrence Weiner; does this mean that the booklet belongs with his artists' books? Apparently it does: the catalogue states that "This issue is designed as a work by Lawrence Weiner." Because Renée Green designed Artist/Author, does this make a secondary work primary? Is Lucy Lippard's 1969 post card exhibition catalogue 557,087, just documentation, or a set of 'cardworks', or just a bibliographic mongrel, like so many artists' books?

As well as blurring boundaries and messing up categories, the art of the 1960s had its own influence upon the publications that document it. Think of the 1970 'perfect-bound' Information catalogue from the Museum of Modern Art printed with typewriter text and near-newsprint paper, mimicking the cheap printing technologies often utilised by the conceptual and book artists of the time; think, too, of the newsprint exhibition catalogue Artwords and Bookworks from 1978 with its rubber-stamped cover title. And just as these publications reflected the sensitivity of graphic designers to the matter that they were documenting, so, too, did artists have to engage, willy-nilly, with graphic design, especially those who needed to document concepts, or who dealt primarily with words.

Arnaud Desjardin's exhibition at Bloomberg Space, in effect a three-dimensional bibliography, makes apparent the interdependence of artists' books and their documentation. But it also amounts to the "strong shadow" that is evidence of "much light". It is odd to think that one should pay as much attention to the shadow as to the source, but it seems symptomatic of our times that artists are looking increasingly beyond the object or even the subject, to the aura or the context. Art has recently become immersed in the idea of the archive, so why not also annexe another apparently autonomous field, the documentation of art? In this exhibition we are largely missing the primary work of the artist but are given instead the fruit and flowers their original creative acts, not in the shape of more art, but in the work of designers, or artists as designers.

The first impression to be drawn from this exhibition is that if this is the shadow then the light must be really substantial. Many of these publications record perhaps a hundred or more other publications. Even given that there is considerable overlap between many of the documents, the field that is portrayed in this tangential way must today be truly enormous. Yet another possible retrieval from the spread of the exhibition is that if, indeed, there is a problem in defining the field, and this does seem to be the case, then these numerous unexceptionable examples of its documentation are a cumulative material definition of what artists' books are perceived to be.

The fact that the exhibition will also be the site of the production of a prototype or first edition of Desjardin's The Book on Books on Artists' Books, which is conceived of at least as an artist's project, helps to muddy the water even further over the question of what an artist's book might be today. But then again, might it not itself be an artist's book of which the subject is artists' books?