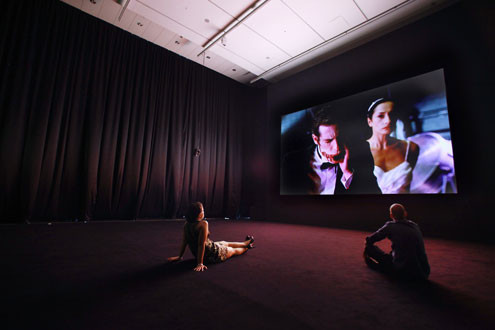 Artist-filmmaker Stuart Croft's commission at Bloomberg Space is an ambitious new dance film. This is the 39th and final commission in Bloomberg's prestigious COMMA series.

A bold, cinematic and compelling work, Croft's new film takes inspiration from MGM musicals, Jean Cocteau, classical ballet, music video and film noir to form a dark meditation on pathos, Hollywood and obsession. It is a circular tale of desire, power and betrayal, in which an aristocratic beauty and a hideously wounded beast enact a seemingly obsessive ritual: they endlessly come together, break apart, come together - ad infinitum.

Croft's fearless use of mainstream film industry production values has been used here to realise a long-standing ambition to produce a substantial dance film. The presence of such material in the context of a gallery space is rare in artistic terms, and asks direct questions about attention, time and physical reality. Furthermore, Croft's mapping of the endless film-loop onto the dominant Hollywood image creates an unnerving sense of recurrence, continuity and dislocation.

Alongside the new commission, Bloomberg Space presents a survey of Croft's earlier films. These include early works such as Point X and Dead Happy, along with more recent, larger-scale films such as Century City and Drive In. Each of these films is selected to reflect on the notion of duality - and the duet - a theme at the heart of the new commission.