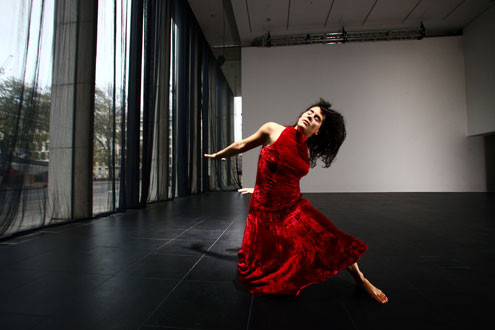 For one week The Place’s artists will inhabit the spaces of the gallery, showcasing the broad and diverse practices of contemporary dance. Including an array of site-specific installations, performances, video documentations and impromptu one-off dances, the show will offer an unprecedented insight into the creative process of dance artists.

Bloomberg support of performance has been wide reaching and focused from dance on the streets and theatre in squares, to supporting The Place Prize from its early idea to now as one of the most prestigious prizes for choreographers. Bloomberg is committed to artistic projects that propel original ideas and reach new audiences and has a particular interest in finding new ways of inspiring audiences simultaneously giving artists rare and treasured opportunities for their practice. We are excited to welcome the Place choreographers to Bloomberg SPACE, many of whom we have worked with or supported in the past.

Celebrating the legacy of the relationship between Bloomberg and The Place, the collaboration will also mark the end of Bloomberg SPACE’s COMMA programme. The new incarnation of Bloomberg SPACE will bring together our philanthropic passions of commissioning new works and supporting the programmes of cultural institutions globally.

Choreography is the focus of COMMA 40 at Bloomberg SPACE from the 19th to the 27 November in which dance artists from The Place will both relate and respond to the architectural features and environment of the gallery which is embedded in the thriving pulse of Bloomberg L.P’s European headquarters. The exhibition is the last in Bloomberg’s adventurous COMMA series, which has presented the work of some 40 boundary-pushing artists in dynamic, fast-paced shows over the last two years. This final COMMA is also special as it marks the first time Bloomberg Space has commissioned dance performance and installation.

Over nine days fourteen dance artists from The Place will inhabit the gallery and create work, site-specific installations, live performances, video documentations and impromptu one-off dances which make reference to the possibilities and limitations of the immediate context as well as negotiating interactions with the general public. Each choreographer takes up residence in the gallery for a day, revealing their working processes and offering insight into their own personal creative journeys. The gallery which is an inviting cathedral-like space on street level with high ceilings and huge windows creating an opening onto the world of the city outside, provides a fertile terrain for dance installation. Smaller more intimate spaces which lead off the main gallery are ideal for video installation and dance on film.

While most of the choreographers featured in COMMA 40 have been either Place Prize nominees or winners and are acclaimed names in the dance world, the explorative impulse of their work places them outside the mainstream. For example Vera Tussing is working with themes of overloading the senses and will create an interactive piece that will involve audiences and will include ‘sound-beds.’ Darren Ellis performs a short solo “After Effects” throughout the day, interacting with a light and sound installation within a modified acoustic drum kit and with which the audience can interact. Alongside Darren’s solo performance will be “Side Effects”, a collection of sets, costumes, design and film from his previous works. Luca Silvestrini is working with the ideas of ‘connecting and confusing’ and focuses on the inside and outside space of the gallery, (the pavement, Finsbury Square), exploring the interface between private and public and the notion of art as fabricated event as opposed to the everyday, spontaneous event. His performers comprise of both incidental and intentional members of the audience. In Simon Ellis’s ‘Booth: Dance Fair’ there are six dance- related activities and a set of instructions provided so audiences can choose whether to watch a solo, perform themselves, watch a video, or listen to a lecture or piece of music.

Less demanding on audience participation, experienced installation-choreographer Rosemary Butcher creates a new piece about memory and the material she creates with her dancer is filmed and shown on multiple screens. Rosemary Lee, whose recent work for Dance Umbrella, “Square Dances”, was also sponsored by Bloomberg, creates a carefully crafted work for solo performer Ben Ash, set to a Glenn Gould interpretation of Bach on piano. Rosemary works intimately with Ben while the process is watched from outside, but frequently reveals to the public what she is doing. The fact that the work focuses strongly on the music and draws attention to the intricate detail of the movement is a reaction to the large-scale outdoor dance installations for a cast of 180 dancers which she choreographed for “Square Dances”.

Other highlights include Place Prize winner Ben Duke using a special Xbox camera to film shadows of people from the street, a live duet by Frauke Requardt and Freddie Opoku-Addaie, a durational solo by Eva Recacha which involves an artist writing on the walls of the gallery and a five hour ‘love duet’ by Igor Urzelai and Moreno Solinas. Plus Tony Adigun charges the space with his hip-hop crew, Avant Garde Dance, and takes their stimulus from the audience.

In contrast to live interactions in the main gallery, the audience can watch Filipe Alcada’s video installation “reassemble” which is a collaboration with dance and choreography by Darren Ellis and Hannah Kidd. Filmed, then digitized, it’s a dance piece that merges the bodies of a male and female dancer and looks at themes of trauma and accidents on the body. Finally and to put the work of the artists in greater context, two screens will continuously play dance films featuring fragments of existing work of many of those involved in COMMA 40.

The bold decision to commission dance installation came out of discussions around COMMA 39, in which video artist Stuart Croft asked to work with dancers and approached The Place, which put him in touch with choreographer Ben Wright. Further collaboration with The Place seemed a natural extension for Bloomberg SPACE.

COMMA 40 also looks forward to the next phase of Bloomberg SPACE commissioning which will support collaborations with artists and partner organisations globally in this legacy of new work and risk-taking.