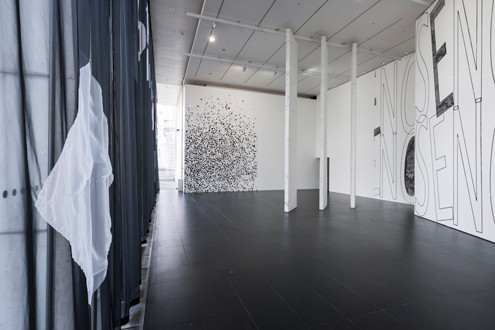 Coleman creates unexpected intersections between the languages of modernism, architecture and the decorative. For his solo exhibition at Bloomberg SPACE Coleman will create 4 pieces for the front gallery that will balance between a developed understanding of the architecture of the space itself and his investigation into exhibition making as design. Approaching the gallery space as a form in itself each piece has been conceived with a place in mind, a place within the gallery and another external to the space which has informed its making.

Constructing strategies for scale and applying a varied approach, each work represents an interaction of the individual act with the overall scheme. The show will include a large wall drawing developed from a snapshot of the terrazzo surfacing of the nearby Barbican Centre. Expressed initially as an intricately detailed watercolor then formed into a relief of wooden tiles; drawing, sculpture and photograph come together in an uncomfortable unity. Three large sculptures will straddle the space; scaled stand-ins for the archetypal modernist upright of Basil Spence's Swiss Cottage Library, affecting the dynamics of circulation and viewpoint. A curtain will be installed behind the distinctive glass façade. Constructed from overlapping layers of transparent material it will delineate the threshold between the gallery and the exterior, concealing or revealing the works of the exhibition according to the differing light levels inside and out. The fourth work, a large text piece will incompletely cover two of the gallery's seven meter walls. Sketched in and loosely applied it deliberately mis-transcribes a Latin American slogan which emptied of its meaning approaches text as space filling decoration.

The installation of Henry Coleman's four works, all newly commissioned for this site, draws attention to the peculiarities-what some might call the awkwardness, others the distinctive character-of Bloomberg SPACE as a place for exhibiting art. Triangular in plan, with double height ceilings, few continuous wall spaces, and one full side devoted to floor-to-ceiling windows facing the street, the gallery wedges into the late 1990s fit out by Powell Tuck Associates of a pre-existing speculative office building designed by Foster and Partners, fused with a 1920s gentlemen's club by Giles Gilbert Scott. A further layer to this urban context is the Occupy Finsbury Square camp across the street, its tented structures and hand lettered signs of protest a familiar sight to which Bloomberg employees and visitors must now be habituated.

In gentle, productive reaction to a space that frustrates more traditional forms of display, Coleman positions his works as additions to the existing architecture, rather than objects placed within it. Earlier pieces by Coleman have wrapped an existing gallery entrance with a lushly corrugated casing, or complicated a traditional ceiling through the application of mechanically cut vinyl shapes. In this latest installation, the sequential layering of vertical elements and the manipulation of scales evoke a stage set. The artist speaks of the pieces as being 'emptied' elements; not active in themselves, but rather coordinates that give the viewer a heightened perception of his or her own location within the gallery.

All four pieces make reference to architectural elevations: two exterior, one interior, and one liminal in character. Confronting the visitor upon entry, "Uprights, Mullions" draws attention to the vertical nature of its host gallery, whilst remaining forthrightly provisional in its roughly assembled and painted texture. The piece, which conveys the sense of a 1:1 scale mock-up, derives its form from the façade of Basil Spence's 1960s Swiss Cottage Library in North London, which Coleman, who grew up in Sheffield, recalls from childhood visits as a symbol of arrival in the big city.

As its title suggests, the work applied to the back wall, "Terrazzo (Barbican)", also derives from an icon of post war British architecture, this time Chamberlin Powell and Bon's Brutalist cultural centre, located just a few minutes' walk from Bloomberg SPACE. Working from a photograph of one of the Barbican's intimate interior spaces, Coleman used the 'live trace' function of Adobe Illustrator to isolate individual stones, which became first a watercolour and then, simplified and amplified, this applied field of tiles. Retaining traces of its phased genesis, the visual interpretation of the wall relief oscillates between image and object; photo and drawing; constituent element and swarm.

The wall painting, "Senor Senor," formally inspired by the political graffiti found in Latin American cities (Coleman has worked in both Argentina and Colombia), investigates the use of text in an artwork. Modifications such as the absent tilde above the 'N', and shading in of the negative space between letters, are intentional moves towards abstraction. These alterations are Coleman's attempt to 'disable' the text so that we receive it as environmental texture or pure decoration, rather than a vehicle for literal meaning, as one might in a country where one doesn't understand the language. The font employed, Lucida Grande, will be familiar to many eyes from Mac OSX operating systems, and many websites; it is also the default font of Google Sketch-up, the three dimensional design programme Coleman uses frequently in his practice.

Unlike the other three works, which make overt reference to external sites, "Telon" ('curtain' in Spanish), derives most immediately from the specific context of Bloomberg SPACE. The spacing of the appliqued circles, squares and crosses on the toile surface is partially governed by architectural boundaries, the spacing of the window bays behind it. The transparent nature of the textile renders this the most dynamic of the pieces, subject to changes of natural and artificial light, and thus significantly altering relationship of the gallery to the street over the course of the day.

The distinct sequence of design and application is essential to the artist's conception of these works. Coleman speaks of his desire to make 'investigative objects', involved in a process of discovery, of working through. Although the hand of the human executor is evident in brushstrokes and stitching, everything is black and white - the simplified language of the draughtboard or screen. By making reference to computer programmes often used in design processes, the artist raises a critique of the arbitrary scaling enabled through these programmes' application. Throughout, Coleman seems determined to strip away extraneous detail, focusing instead upon fundamental processes of translation and scaling, and the act of exhibition making itself.