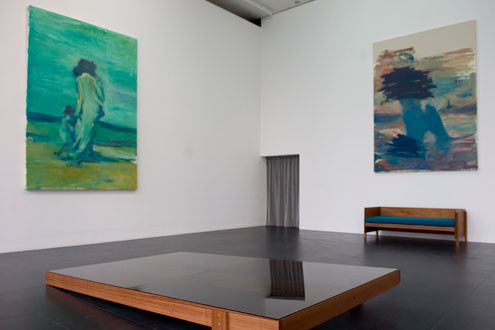 Ellis creates vast and rapidly executed canvases in a broad and painterly style. Working from source material ranging from his own drawings of everyday life to Old Master paintings and imagery drawn from mass-media he first produces small and intimate oil studies in which he exaggerates the aspects of the images that draw his eye and defaces or deletes those areas that do not. He then uses these studies as reference models for the expanded, blow-up versions. By painting specifically selected and edited subjects on an epic scale with the same speed and economy of detail as the smaller works he produces paintings whose alienatingly large proportions belie their intimate, Romantic beginnings. The blow-up paintings will be shown alongside domestic furniture in the form of beds, sofas and coffee tables that he makes as a depressurising, vernacular foil from which to survey and enjoy the exhibition at leisure.

Martin Kippenberger, who famously used a Gerhard Richter as a coffee table, radicalised painting's significance through profanation. Tom Ellis, on the other hand, believes if something's worth doing, it's worth doing correctly, and with certain propriety. In his eponymous exhibition at Bloomberg Space, he's showing paintings and a coffee table (as well as a chair and two day beds). These might all be considered paintings, or at the very least, a concept of painting as wholistic environment.

Painting, for Ellis, is more than a pursuit; it's an ever goading challenge to re-invention, extravagantly performed through devotional ritual. He has a studio in East London, which he keeps especially for life drawing. He spends his mornings studying the figurative form through a Dürer Grid, making copious drawings in pencil and sometimes thinned oils. In the afternoons he retires to his country pile studio, in the south wing of Blake Hall, Essex; a once grand 18th century ballroom, it retains an appropriate ambience of faded aristocracy, which Ellis enhances through his decor of handcrafted luxury furniture. It's here that he engages in the tradition and lineage of epic-scale romantic painting.

Ellis' knowledge of art history is nothing short of encyclopaedic: when making paintings about painting and its infinite possibilities, he takes a revisionist approach; rescuing the lost and forgotten from archival obscurity – provincial German genre painters are a particular favourite – appropriating found imagery for his own application. His subjects are chosen for their personal resonance, their readymade metaphor for Ellis' autobiographical adaptations. And because they're things which look like Art: people and landscapes, pastoral and rustic, blissful idealisations. Two of the paintings on show were inspired by August von Pettenkofen, a 19th c. Austrian artist (who, as art-heritage dictates, made paintings on his father's estate), whose scenes of peasant families became stand-in portraits of Ellis' own wife and child; the bereft notion of authenticity supplanted by Ellis' intimacy and optimism.

Authenticity and exhaustion are Ellis' bar-setting opponents, which he continuously refutes through process: his gigantic paintings originate as tiny sketches, some repainted dozens of times. It's an obsessive's ceremony, borne of the pure love of the craft, the mastery of illusion's trickery, imbuing a canvas with a life of its own. His small renderings are hurried,

expressionistic affairs, trapping the spontaneity of the moment. Traditionally, artists make sketches to plan out their finished works; Ellis remakes his sketches on grand scale. Not copies, but alikes, each one existing as their own original, independent experience. Each of the canvases in his Blow Up series spans at least 3.5 metres, which he accomplishes in one or two days using a very large brush on a pole. The effect is pure energy of improvised action monumentalised: immediacy of mark-making, nonchalant casualness of surface, spectacles of grandiloquent intensity.

Ellis makes this look effortless, which is a painter's deception of calculated control. In Father and Son, a magnified inky detail, the swarthy monochrome surface plays a double-game of consuming void and corporeal structure, obliterating the figures underneath with a replica watercolour wash that pours down the surface like dripping concrete. The Gypsy Mother, too, is a visual conundrum, the liquid brushstrokes vividly shifting, creating near-tangible relief from absolute flatness. These works are manifestations of impossible physicalities, self-defined by Ellis' idiosyncratic gestures: A Dog Always Wants Its Dinner, defaced to near abstraction, is a show-off exhibit of cause and effect. Executed on a partially primed canvas, volatile scribbles lap against bare linen, exposing the treachery of painting-construction. Hung high on the palatial-scale walls, their domineering sublimation is civilised as soft power in juxtaposition to Ellis' furniture.

Installed beneath his paintings in Bloomberg's stately modern gallery, Ellis' utilitarian sculptures epitomise discernment and decorum. Inspired by designs from the 20s and 30s, and entirely fabricated by hand, his furnishings are exquisitely tasteful aberrations: an Edwardian table chair, occultishly throne-like, rests precariously on spindled front feet; while Unsubtle Table is a parlous glacier of polished glass, a low set altar, clinically corporate, crippled under its own devastatingly beautiful weight. Daybed No. 1 and 2 pose as counterbalance to Ellis' wildly romantic paintings: their hard-edged geometries playing havoc with perception, linking colour, form and line throughout the exhibition. Their function isn't domestic, but a painterly device, binding aesthetics, ideologies, and ways of being; a more correct approach to painting, where contemporary relevance lies in the time-honoured propriety of one-of-a-kind and the truly bespoke.