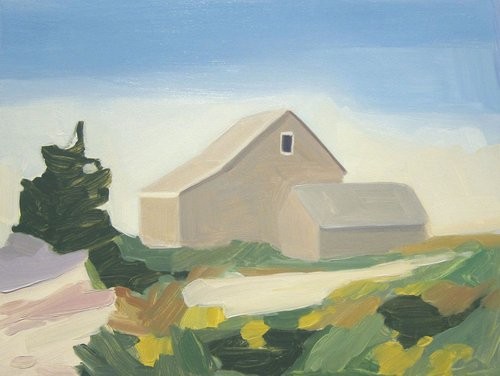 One of my first memories of becoming aware that art and life and emotion are a tangled web was a series of marks I noticed in the alcove of my grandmother’s stairway to her apartment. It was 1974, 842 North La Jolla Ave above Melrose. She was a heavy, squat, Irish woman who married a Jew. Sophie was her name but to me she was my Nana. I adored her. Always smiling, always wonderful, Nana was just pure love. And oh god those Russian tea cookies! But because her stairwell had no railing, she used the wall to steady her step. So her handprint graced that wall all the way up to her door on the second floor. Black fuzzy dots that marked the days into years ascending. They were strange, a moment that stirred something else, and even as a thirteen year old kid, it turned on a light in me: that there is beauty in the moments that we least expect them, that we are here in other ways, that we leave things behind that have meanings that don’t need to be secret. It’s the everyday, the nothing of our lives that can be the sum of it all. So if moments can be taken out of that everyday, reflected upon and given new life: suddenly fairy dust can rain down, and tiny epiphanies, like lovely little grace notes, can make us aware that we all possess the ability to live and appreciate an aesthetic life. We just need to feel what we see and hear. And if we are alert and aware and open, we can see the world in a different light. Ah mystic truths.

After she died of a stroke in October 1979, I walked up those stairs and touched every mark she made. It was my first real loss and, in my way, I was with her.

Cut to a lifetime later when Freddy Kunath gave me an iPod. There were over 4,000 songs on it. I’m messing around with it and I came across one of the genres that happened to be ‘country music’. I don’t listen to ‘country music.’ Patsy Cline sure. Wrecked Johnny Cash yeah. Nashville Skyline doesn’t really count right? That’s it. But I started to listen to Fred’s ‘country music’. It was new. It was amazing. And it’s always been here, I just didn’t notice.

Love. Loss. Longing. Happiness. Regret. Hopelessness. Everything sung out so easy and simple. Nothing was complicated, the words direct, clear, and from the heart. Even the structure of the music was not anything you could really fuck up. There was enough space that you could hear every note. I swear the bass line on every song by every artist was the same.

And if you choose to listen you’ll often hear pure emotion.

That is what this show is about. As an audience, those who understand the language, can ‘read’ this work. And anyone that has made it this far in the text, well, I’m preaching to the converted. I wish that people understood us, what we do, how much more wonderful the world is when you are aware, open, considering, gone. Look, we only get one shot here. Might as well be romantic, hopeless, reflecting. And my intent is that if just one person can feel what’s going on here, sees those black dots ascending and is willing to reach out, touch, and see that the world around them is loaded, drop dead, and implodes, then we’ve won over one more heart to a life that considers aesthetics as important as breathing.
www.blumandpoe.com