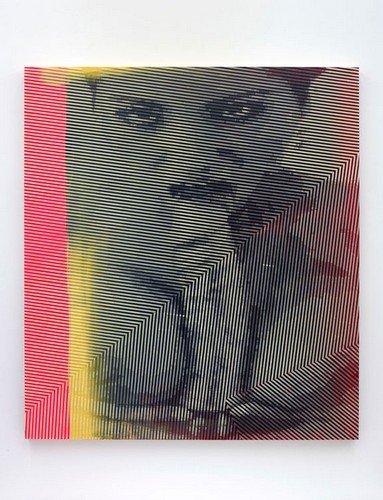 Blum & Poe is pleased to announce an exhibition of new paintings by Dirk Skreber. This marks the artist’s first show of new work in Los Angeles in seven years and his fourth solo-presentation with the gallery.

Dirk Skreber’s new paintings radiate with a graphic intensity and a high-voltage pop color palette. By layering strip after strip of foam tape atop panels rolled with varnish, polyurethane, watercolor, enamel, spray paint, fluorescent paint and primer – but absent of oil or any conventional brushwork – Skreber creates images of slightly obscured and brooding (mostly female) models, set against highly refined ornamental surfaces. These “pluck” paintings as they are called - due to the intricate removal of foam tape by careful burning or picking – suggest an uneasy exchange between the figure and their surrounding pictorial space. Models’ faces and bodies only come to the fore when Skreber picks or burns away the foam tape to varying levels of thickness, revealing his subject purely through shadow and line – not with paint. This “reveal” allows his subjects to emerge from behind the picture’s surface rather than on top of it, filling each portrait with a mysterious sense of psychological detachment.

For nearly ten years, Skreber has been investigating portraiture by way of foam tape painting; gaining a new technical proficiency previously exemplified in his renderings of car crashes and aerial fly zones. In 2002, Skreber exhibited foam tape paintings of superheroes and soldiers whose images were culled from the Internet. These physically dominant men and overly sexualized women became central to his practice and continue to play an important role in his most recent series of paintings. Katee I (2010), Katee II (2010) and Katee III (2010) are each found images of Katee Sackhoff, the American actress who plays Captain Kara “Starbuck” Thrace on the Sci-Fi television program, Battlestar Galactica. By obscuring her likeness and that of all his models, Skreber creates a veil between fantasy and reality, heightening our experience as viewers within the world of surfaces he has created for us.