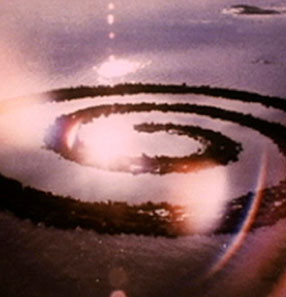 For this project, Heitzler has borrowed and reconstituted footage from three artists' films produced in the early 1970s: Spiral Jetty (1970) by artist Robert Smithson, Crystal Voyager (1973) by California surf filmmaker George Greenough and the experimental film, La Region Centrale (1970) by Michael Snow. By presenting these films side-by-side and with overlapping audio, Heitzler raises both structural and conceptual associations between seemingly disparate projects. Each of the appropriated films marks a moving away, or a moving on, whether from the constraints of the gallery, the rules of filmmaking, or the physical departure from the crowded surf of the beaches of Santa Barbara. Each also employs new technologies and filmmaking devices to facilitate this shift from pre-existing norms, while highlighting the filmmakers' utopian desires of the arresting of time and space.

Robert Smithson's Spiral Jetty documents the construction of the artist's site-specific land art installation in the Great Salt Lake of Utah, shot with a camera mounted in an overhead helicopter. The path of the overhead camera begins to synch with the movements found in La Region Centrale, Michael Snow's experimental film shot entirely by a mechanical swing arm and the cascading and hypnotic camera movements in George Greenough's groundbreaking surf film, Crystal Voyager. Greenough revolutionized California surf films by inventing wave-riding machines that facilitated the filming of a surfing experience previously only known to riders, earning his film a place in the 1973 Cannes Film Festival.

The pairing of these three particular projects speaks to Heitzler's interest in identifying the zeitgeist of an era; that is, the moment when the sixties lapsed into the seventies and experimental filmmaking was at a precipice.

This work is being exhibited concurrently at Renwick Gallery, New York on view through July 29, 2011.
www.blumandpoe.com