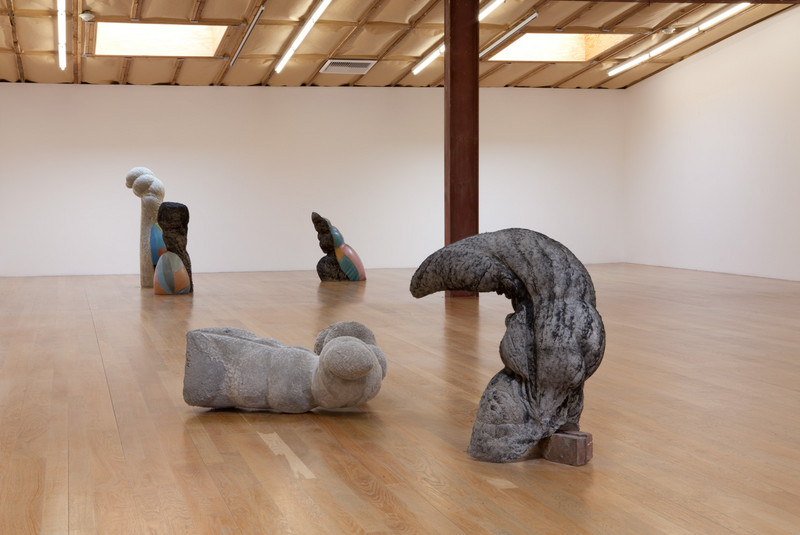 Blum & Poe is pleased to announce New York artist Gavin Kenyon’s first solo-presentation in Los Angeles, featuring a selection of new sculptures that address size and scale. Two large sculptures – an arch and a column – are comprised of multiple forms stacked from floor to ceiling. Their architectural proportions contrast with several mid-sized sculptures whose humanistic scale alludes to bodies loosely arranged in groups. Kenyon’s anthropomorphic works are seemingly approachable figurative forms, yet they elicit a sense of deviance upon further investigation. Drawing inspiration from such realms as American quilting traditions and the pioneering spirit of Paul Thek, the allure of Kenyon's artwork lies in the inscrutable brilliance that often occurs in the vastness of contradiction. Resting in the balance between chance and control, masculine and feminine, and figuration and abstraction, these sculptures thoroughly straddle the line between the beautiful and the grotesque.

Kenyon freely employs a process-based approach and yields control over the end result. Comprised of plaster, fabric, and pigment, Kenyon's recent sculptures are gorgeously stained, physically heavy, viscerally primitive, and humbly perverse. The artist sews together sacks made from pieces of found fabrics and animal skins, such as leather, vinyl, cotton towels, old coats, and fur. The sacks are suspended and filled with plaster and/or cement, then tied and intermittently bound with rope while the material inside is still liquid. When the plaster dries, the sacks are torn away, leaving patterns and fabric remnants. The resulting forms are oriented to stand upright and painted with variegated, muted tones. Exemplifying how materials behave under stress and constriction, the sculptures are incarnate reflections of the intricacies inherent in the diverse material chosen, as well as the organic twists and contours made by chance.

Gavin Kenyon was born in Binghamton, New York in 1980. He received a BFA from Syracuse University and an MFA from the School of Visual Arts, New York. He will have a solo exhibition featuring new work in March 2014 at MoMA PS1, Long Island City, NY.
www.blumandpoe.com