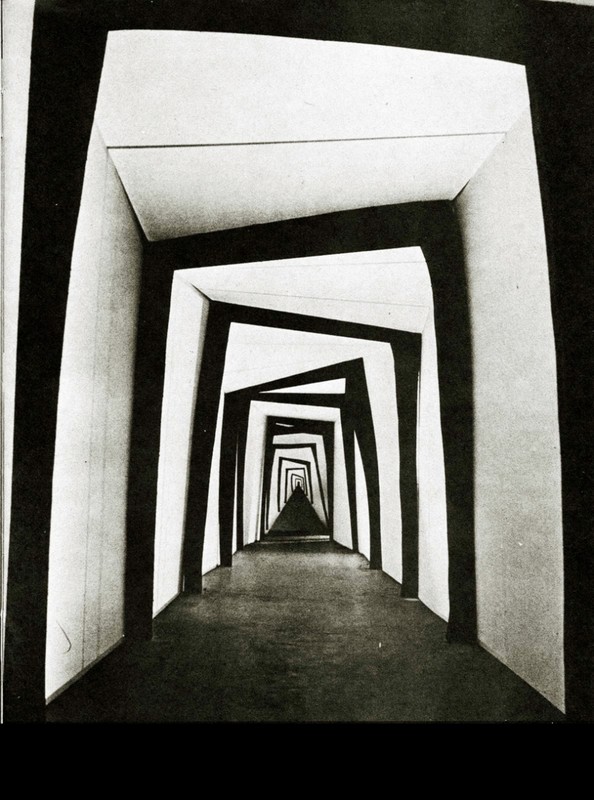 For this exhibition, Scott-Douglas draws inspiration from the 1920 German Expressionist silent film, The Cabinet of Dr. Caligari. Directed by Robert Wiene, the film has long been regarded for its use of highly stylized two-dimensional stage sets and the employment of mise-en-abyme, or dream-within-a-dream narrative, to tell the story of Francis, its protagonist, through flashbacks -- one of the earliest films to utilize this technique. As the plot unfolds, a physical and psychological mirroring takes place, one in which time, space, and perspective are called into question. The deceptively elaborate (although in reality quite simple) stage sets used to create such visual trickery are paramount to the film's success and have inspired the installation and architectural choices in Scott-Douglas' current presentation. Much like how Wiene's stage sets dictate the mood of his film, Scott-Douglas, through careful study of Blum & Poe's architectural footprint, has authored an ambitious installation comprised of ongoing bodies of work: cyanotypes, laser cuts, road cases, and slide projections.

The cyanotype (or blueprint), created in the 1840s and used largely by architects (and later artists), is one of the earliest non-camera photographic processes, developing images with the aid of the sun rather than artificial light. The process allowed architects to make inexpensive copies of their drawings prior to the age of photocopy machines. In Scott-Douglas' hands, the cyanotype is used to produce works imbued with motifs designed through computer-generated algorithms. The patterns are output onto transparent film, and then exposed on canvas. The resulting chromatic variation from one canvas to the next is a bi-product of the contingent environment -- the intensity of the sun passing over the canvas at its time of development. In this exhibition, Scott-Douglas uses a grid of eighteen cyanotype pictures measuring 18.5 feet high by 37.5 feet wide as the initial focal point for his installation, towering over four imposing road cases. Using the full surface area of the gallery's largest wall, Scott-Douglas builds a lattice of blue patterning, alternating and subtly shifting in tonality. The artist endeavors to create an "architectural kiss," a term coined by the architectural scholar Sylvia Lavin, whereby the cyanotypes gently embrace the existing architecture, and each piece of the remainder of the installation falls in line.

Just as Scott-Douglas' cyanotype pictures require ultraviolet light to develop, his laser cuts rely on infrared light to generate their motifs. Infrared, on the opposite end of the light spectrum from ultraviolet, has the ability to burn away the surface of a canvas in a highly controlled manner, unlike sunlight. Scott Douglas' laser cuts are "built" from the pictorial information found in his cyanotypes. After photographing a completed cyanotype, the artist will scan and decode the resulting image and export its content to a laser-cut machine. The laser cutter will then produce a "negative" of the blue picture, in essence creating a canvas devoid of all the cyan information found in the original source material. It is through this subtractive process that a relationship between these bodies of work takes shape. The life of the blue picture and the laser cut extends into a different potential space, all the while carrying the DNA of one and the other wherever it may travel.

This notion of transience is one that Scott-Douglas aims to address with his road cases. Conventionally used as a means of transporting equipment from one site to another, the road case here functions practically as a piece of "temporary architecture" and symbolically as the means to contain an inherently transient object. Constructed on a one-to-two descending scale from 14 x 28 feet at its largest to 2 x 4 feet at its smallest, the four road cases in the exhibition each contain an embedded laser cut filled within the metal frame of the case, which function equally as frames, walls, and cases. The laser cut exists only temporarily in its current incarnation as part of the gallery's architectural plan - like a fake wall. Upon the end of the exhibition, the transient object becomes victim to any number of environments it might travel to, eventually finding a resting place, only later to be moved again. Scott-Douglas retrains our eye to the power of the set or stage to distort our understanding of space and time.

Alone in the smallest of the three main galleries, Scott-Douglas will present a new slide project. Loaded with eighty slides, each of the five rotary slide carousels will throw a square of blue light on the opposing wall at unsynchronized intervals, creating a cacophony of mechanized shuttering. Similar to how the production of his laser cuts depend on the existence of their corresponding cyanotypes, the artist has matched the chromatic value of each slide to an existing blue found in a cyanotype picture. Beyond their formal relationship, the duration of each slide projector is timed exactly to fifteen minutes, the amount of time required for the sun to fully expose a canvas outdoors, after which time, no further cyan can be drawn from the chemistry. It is through these relationships of form, content, time and space in which Scott-Douglas' practice takes shape and one is left to negotiate within the hall of mirrors he has built.

Hugh Scott-Douglas (b. 1988, Cambridge, England) holds a BFA in sculpture from the Ontario College of Art and Design (OCAD). His work will be featured in the forthcoming exhibition Pattern: Follow the Rules at the Eli and Edythe Broad Art Museum at Michigan State Museum in March 2013.
www.blumandpoe.com