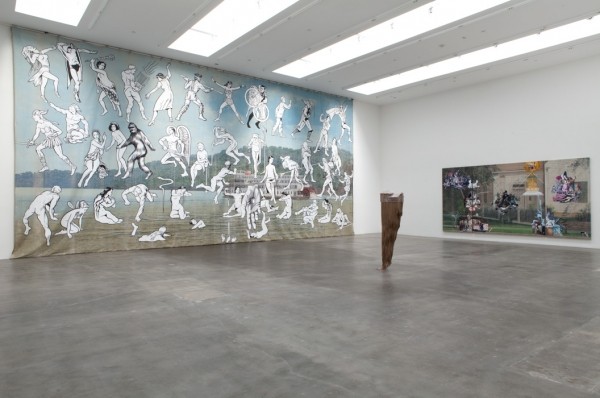 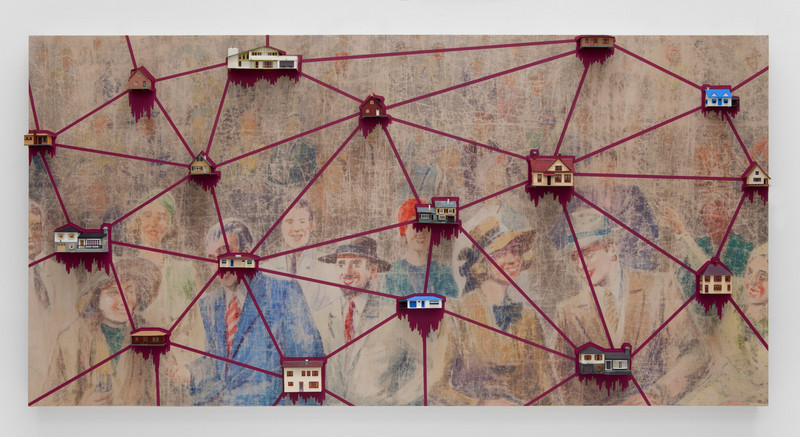 Blum & Poe is very pleased to present our first solo exhibition with Los Angeles based artist Jim Shaw. Spanning two decades and covering the entire gallery, Shaw’s fantastical, humorous, and psychologically laden explorations into esoteric, as well as popular, cultural phenomena coalesce to render a tale of Biblical proportion. Combing historic texts, artworks, comic books, and his dreams, Shaw’s flood of imagery is an essential tool in conveying his imagined histories and fables. Rivers, houses, and hair are but a few motifs repeated throughout the exhibition. Seemingly disparate, they mnemonically serve each other in depicting over-arching themes of fallen heroes, collapsed economies, concepts of sin, and general doomsday destruction.

No human transition is more extreme than life to death, which Shaw makes prominent in his repetition of ominous, and yet cleansing, water motifs. Enveloping the exhibition space at eighteen by forty feet is the work Mississippi River Mural, an old theater backdrop layered with a frieze of figures painted in illustrative comic style in battle-ready stances. This commanding work is unnervingly static, as if the figures have waited an eternity for their stage queue to the afterlife. Shaw’s obsession with the cycle of life and death serves as a basis for the other works in the show.

Playing central roles throughout the exhibition are two operas: Wagner’s The Ring of the Niebelung and Brecht / Weill’s,The Seven Deadly Sins. Each depicts the lust for earthly objects as the ultimate downfall of man. Shaw’s painting The House in Mississippi illustrates this damning quest quite literally with a coffin, in the guise of a home, being carried down the river by seven pall-bearers. Once acquired, the home becomes a burden, trapping the one who sought it. Directly across from this work is a house composed of hair. In this example, hair becomes a binding, tentacle-like force, entangling man in his own selfish pursuit.

Shaw’s concern with the sin of man is cast in a broad range of spiritual fanaticisms. References to Evangelicalism, Blakean mysticism, as well as his own fabricated pseudo-religion, Oism, shift the conversation from one of high art to populist agendas. In this vein, Shaw has created a banner similar in style to Evangelical tent revival murals, which crosses Biblical, Eschatalogical, and Oist histories. Stemming from a place of self-reflection, these often grandiose gestures are marked with a sense of vulnerability. Alchemically fusing the high and low Shaw’s capacity to produce a body of work that reveres the human condition, in all its extremes, remains unmatched.