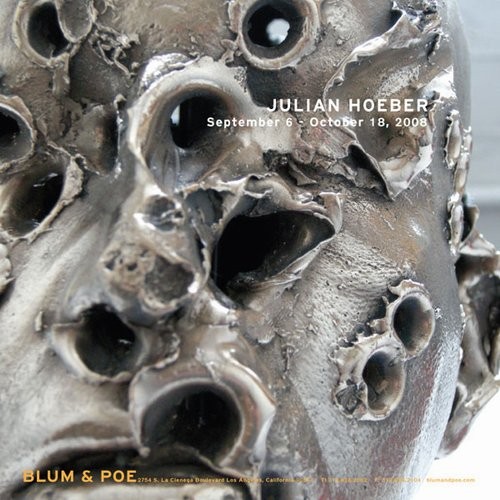 JULIAN HOEBER
"All That is Solid Melts into Air"

This new body of work is an old tattered body. Totally classical forms. Forms that keep threatening to die. And even if they survive, they are sullied with the look of death. Hence bronze figurative sculptures riddled with bullet holes. Hence optical art mashed together with trompe l'oeil painting with psychology pushing through the surface like the ribcage of a decaying corpse.
I don't think of myself as a whole and unique identity. I do however consider myself to be a very specific location through which a unique set of ideas, experiences, feelings and influences pass. The best model of a person is a tube. Stuff goes in and stuff comes out. A lot of stuff has gone into me over the years. A mashed together version of all of it is what I try to squeeze out.
So the stuff that went into my tube: Bridget Riley, Camille Claudel, Judy Chicago, Valie Export, Barbara Kruger, Roy Lichtenstein, Thomas Eakins, Arthur Fellig, Christopher Wool, Sterling Ruby, DJ K-Swift, Santogold, Melanie Klein, Cy Twombly, Hermann Nitsche, Chris Vasell, Lucio Fontana, Paul Cezanne, Mark Quinn, Nate Lowman, Barnett Newman, Elaine and Saul Bass, Giulio Questi, Herschell Gordon-Lewis, Jean-Luc Godard, Paul McCarthy, Jim Shaw, Niki de Saint Phalle, Jesus Rafael Soto, Kori Newkirk, Jasper Johns, Kenneth Noland, Cady Noland, Tony Tasset, John Stagliano, Diplo, F. X. Messerschmidt, Tony Cragg, Alfred Hitchcock, David Simon and Ed Burns, Lucian Freud, Sigmund Freud, John Cassavetes, Robert Bresson, Vito Acconci, Harlod Brodkey, Mike John, Sasha Grey, M.I.A, The Minutemen, Marina Abramovic and Bruce Naumann.
I could go on. And on. But the thing is the forms I love most are those old ones. And the first thing that ever fed my tube was my mother, she the child of card-carrying members of the communist party, and my father a bureaucrat who was also an actor in the theatre. He practiced two arts one of fighting stasis and one that is dead. I am in this sense a relic--one that believes in old forms and old ideas, or at least was inundated with them. And those forms and ideas are dying. I'm not gonna fight it too hard. But I will be true to the tube that I am. I was once told by a raw food nutritionist that if you eat live things you will be full of life. If you eat dead things...well you can figure it out.
If there's anything that I’ve properly digested, it's post modernism, that silliness. The pastiche of references that once was the center of art making had as its subject matter the very act of pastiche. David Salle's work was empty except for the fact of the conglomeration of things that he smashed together for no good reason. For those whose stock and trade was the readymade, from Duchamp to Koons, the subject matter was the absurd gesture of appropriating an industrial object. But at a certain point sculptors of my generation realized that Koons' basketballs were no more remarkable for the fact that they were appropriated than Judd's plexiglass and stainless steel angle iron. The product of an anonymous manufacturer is whatever. Basketballs and urinals are just more material. At a certain point I think art works started to take on this quality of anonymous product. I'm not referencing Bridget Riley in my work any more than Judd was referencing the industrial designer who developed the process by which aluminum rod is extruded. I've eaten up all that dead stuff. Cooked it. Chewed it up and made some shit out of it. I've chewed up history, digested it and pushed out something which although stinking a little of death, has a certain whole synthesized, digested quality. And like the any other shit, you could find more different strands of DNA in it than in its producer.
- Julian Hoeber

Blum & Poe is pleased to announce our third solo exhibition of Los Angeles based artist Julian Hoeber. The exhibition will include two new bodies of work, the first a series of fifteen works on paper that continue Hoeber’s investigation of psychology and nausea through perceptual tricks. Hoeber will also present a series of ten unique bronze-cast heads, a darkly humorous and absurd evolution of classical sculptural busts that have been shot, beaten and bitten.
Prior to earning his MFA from Art Center College of Design, Julian Hoeber attended the Karel deGrote Hogeschool in Belgium and received degrees from the School of the Museum of Fine Arts Boston and Tufts University. Hoeber has exhibited internationally, a recent selection of venues include Parc St. Leger Art Contemporain, Pougues Les Eaux, France; LACE, Los Angeles, CA; Deste Foundation Centre For Contemporary Art, Athens Greece; Today Art Museum, Beijing, China; and Emily Tsingou Gallery, London.
For further information or press materials, please contact the gallery at
info@blumandpoe.com or 310-836-2062.
www.blumandpoe.com