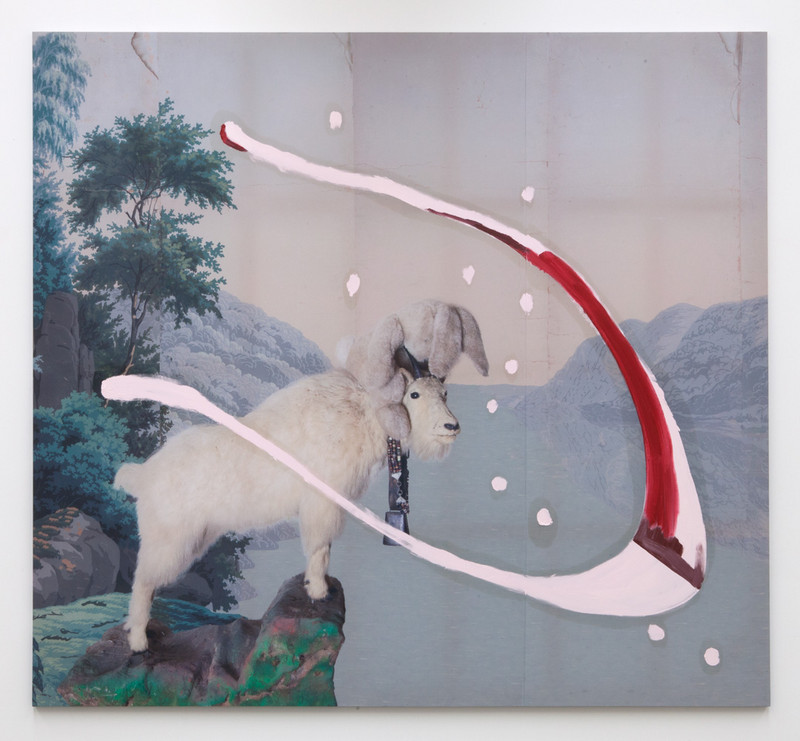 After a hiatus from the West Coast art scene for nearly a decade, this first exhibition at Blum & Poe takes the form of a concise overview of an exhilaratingly divergent painting practice—making a forceful case for the historical importance of Schnabel’s oeuvre as well as his ever-growing relevance to a new generation of artists.

Twelve important paintings made between 1975 and 2015 will be displayed in the gallery’s ground floor. Together these paintings make manifest the scope and depth of Schnabel’s work—his groundbreaking material experimentation, his exceptional formal range and simultaneous mastery of both figurative and abstract idioms. Not only will this exhibition serve as an introduction to this artist’s legendary work for younger viewers, it positions Schnabel as one of the great auteurs of the postwar period.

Transcending the question of recognizable style, Schnabel’s practice, while wildly heterogeneous, is connected together by his unmistakable personal vision—his distinctive aesthetic touch, the audacity and freedom of his varied gestures, the insistence on the physicality of his surfaces, and the unapologetic emotional inflection in all of his works. As Schnabel wrote in an attempt to locate his unique approach to making work, “feeling cannot be separated from intellect...what is expressed is a feeling of love for something that has already existed, a response to something already felt.”

Giving evidence to Schnabel’s singular authorship, the distilled selection of paintings includes: The Patients and the Doctors (1978), his first work deploying an abstracted mosaic of ceramic shards and sculptural picture planes; Jack the Bellboy (1975), an early wax painting that Schnabel considers his first mature painting; The Tunnel (Death of an Ant Near a Power Plant in the Country) (1982), an early painting made on found plywood in metric sizes that he bought in a lumber yard while working in Porto Ercole, Italy; Rebirth II (1986) a painting that incorporates an antique Kabuki theater backdrop; and The Edge of Victory (1987), a magisterial tableau made upon a tape-encrusted and stained boxing tarp from the old Gramercy Gym that Schnabel inscribed and painted with sweeping white marks. Without regard to chronology, this selection of radical, foundational pictures is hung in relationship to works from the past fifteen years. These more recent examples feature one of Schnabel’s Goat Paintings from 2015, from a series begun in 2012; a spray paint composition from 2014; an abstract “pink” painting made in 2015 from the sun-faded canopy Schnabel found in Mexico; and a regal full-length Portrait of Tatiana Lisovskaia As The Duquesa De Alba II (2014) referencing Goya.

Accompanying these compositions, the upstairs gallery features approximately forty drawings made between 1976 to the present that echo the formal and conceptual range of the paintings in the downstairs gallery.

In sum, this exhibition attempts to foreground the emotive punctum that runs throughout Schnabel’s work—otherwise stated, the wounding point or touching detail where his unconventional methods and materials are fused with emotive, tactile, and deeply narrative meaning. Despite the range in dates in which these works have been made, looking at these pieces together reveal a consistent artistic “touch” or transformational element that Schnabel is able to imbue in the found materials he assimilates into his work.

Running throughout the exhibition is a pictorial vocabulary that is consistent throughout Schnabel’s career but takes on many forms. The trope of the white stroke—curvilinear swirls of white paint that often disrupt both figurative and abstract compositions—or the haphazard traces of splashed purple pigment are seen in numerous paintings selected in the show. Likewise, dedications, proper names, and other literary references in titles are used to evoke a narrative imaginary that runs through Schnabel’s oeuvre.

As Schnabel wrote about the seminal painting Jack the Bellboy, featured in the last room of the exhibition, “The difference between the physical and pictorial elements of the painting confounded an easy viewing; it was hard to look at. It activated a sensation, like color blindness, that yielded a sensory disorder that I thought was an analogue for my emotional state. It was also about the third intangible element between the viewer and itself: the blind spot. It was like a sort of dyslexia where a letter’s proximity to another makes it disappear.”[1] In many ways Schnabel’s attempt to describe the alchemical reaction simultaneously generated by the retinal, conceptual, and emotional affects of his work could be applied to all of the paintings selected for this exhibition.